The Vandivier family wins the Leopold Conservation Award for their restoration of an Edwards Co. ranch

Up close and personal with Downtown's newest high-rise residents

Love (and trophies) for Austin's leaders of livability

Petition for Writ of Mandamus

Beside the Point: Riptide!

The Toxic Corruption of Our Political System; and Herbert Hoover Revisited 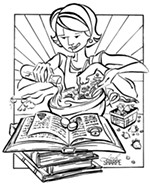 Traverse the world of food from your poolside perch this summer

Beyond the Great Wall: Recipes and Travels in the Other China

Two Dudes, One Pan: Maximum Flavor from a Minimalist Kitchen

Around the World in 80 Dinners: The Ultimate Culinary Adventure

Delizia! The Epic History of the Italians and their Food

Screen Doors and Sweet Tea: Recipes and Tales From a Southern Cook

Trevor Ross cooked up his own protein bar, and they're available to you

Restaurant closings dot the Austin landscape, while Zax and the Belmont expand their hours and menus

Comfortably Numb: The Inside Story of Pink Floyd

Rollin' with Dre, the Unauthorized Account: An Insider's Tale of the Rise, Fall, and Rebirth of West Coast Hip Hop

Bowie in Berlin: A New Career in a New Town

Tell the Truth Until They Bleed

The Music Lesson: A Spiritual Search for Growth Through Music

A Deeper Blue: The Life and Music of Townes Van Zandt Guess Who's Coming to Terrorize Your Night

Zen and the Art of Winning Championships

Funny Ha-Ha in a Half-Dozen Languages

'TV Eye' has lost its love for Lost

Russell Crowe narrates this insider's documentary about Australia's Bra Boys – a family of brawlers whose exploits are legendary.

Astonishing and hyperstylized images mark Tarsem's stunning but mournful movie, which is also layered with fairy-tale subtext and thickets of moral and motivational ambiguity.

Sex and the City

The new feature stands on its own (typically stilettoed) feet, while holding fast to the series’ singular mix of the giddily ribald and brutally confessional.

First-time writer/director Bertino, a UT alum, scares up a solid horror-film success with this debut outing.

This earnest, well-acted ensemble film is a seriocomic meditation on what it means to be an American male approaching the dreaded four-oh.
arts & culture

Robin Lewis: If it's springtime, it must be Hitler

A new theatre company gets Broadway vets to teach teens in Austin, and an older one gets a new artistic director and a new name

Underneath its vulgar, profane surface, Bert V. Royal's look at the Peanuts gang as teens still honors its source material

Much has been invested in mounting Manuel Zarate's five-play cycle, all to answer the basic question: What is love?

Atelier 2008: Selections from the Department of Art & Art History Faculty at the University of Texas at Austin

Wake for the living; Stephen wants to see what you're going to wear.

An ex-Imperial Wizard of the Ku Klux Klan writes a sex book as a woman, 10% of Brits think George W. is their leader, and more