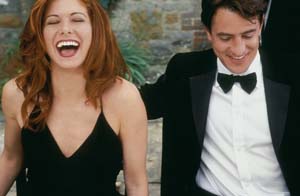 Inexplicable Fantasy Romances for the Harried Modern Gal 101 is a more fitting title for this shameless mediocrity, although you'd likely lose no points for comparing it to kissing cousin Pretty Woman, which operated in the same fantastical universe where prostitutes and gigolos arrive without medical documentation but baring blazingly white choppers and butts to die for. Where is this miraculous parallel universe, anyway, and why hasn't Stan Lee capitalized on it yet? Will & Grace's Messing plays Kat Ellis, who, in the film's exceedingly quick set-up, scours the NYC positions-wanted advertisements for a male escort to accompany her to her sister's wedding in England, with the aim of making her ex-boyfriend jealous enough to take her back. She succeeds, sight unseen, in netting Mulroney's Nick Mercer, a professional love machine with savoir faire to spare who's also prone to offering up pearls of Yoda-istic relationship advice unbidden. Any reasonable woman would smack this smarmy clown clean off the block and grab the nearest pizza delivery guy or bohemian-in-residence in lieu of such a gormless wonder, but not Kat, who's still so broken up over her previous dumping that she's clearly not thinking straight. Once in jolly old England, the script, courtesy of newcomer Dana Fox, takes off in all directions, with familial intrigue, randy British best friends, and the hard, hard lessons of love undone in the face of Mulroney's chiseled abs 'n' bum technique. It will catch no one but sleeping infants by surprise when Kat begins to fall for the professional, and vice versa. The only question is how and when will it be most inconvenient, and that's accomplished by lifting what feels like whole chunks of plot maneuverings from the battered (and frankly better) backstories book of Richard Curtis, the screenwriter behind Four Weddings and a Funeral, Notting Hill, and Bridget Jones's Diary, any one of which has an easier way with the audience's suspension of disbelief than this disastrous date. Even Curtis' recent Love Actually (a film so overstuffed with Brit-wit-twittery as to be nearly as dangerous to one's heart-health as a fistful of Cornish pastries followed by a Arsenal hooligan chaser) had a modicum of sappy charm, not to mention some tangled storylines that, even at their most unlikely, ached to be real, or at least as real as a film featuring Billy Bob Thornton as a libidinous Yank president can be. Kilner, alas, has little of Curtis' rampant fictional-people skills, and so Messing and Mulroney, who have precious little chemistry between them (he's as stoically stodgy as Hugh Grant awaiting a colonoscopy but far less interesting to look at), find themselves adrift in a sea of oddball relations, late-night make-out sessions that have all the erotic heat of a 1970s-era Tampax commercial, and last-minute revelations that seem forced beyond measure. And then there's that whole Dreamy Male Gigolo thing. It's enough to make you wish Lou Reed would take up screenwriting. 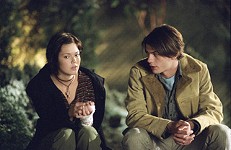 How to Deal
How to Deal’s title suggests a solution, a clean course of action, when in fact the most refreshing thing about this teen dramedy is its ...