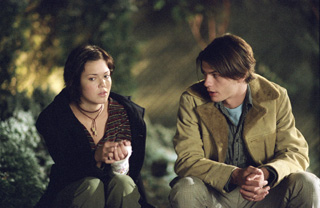 How to Deal’s title suggests a solution, a clean course of action, when in fact the most refreshing thing about this teen dramedy is its willingness to embrace, even celebrate, the messiness of young adulthood. Seventeen-year-old Halley Martin (Moore) has an even messier time than most: Still recovering from her parents’ split-up, she’s further stunned by her father’s speedy marriage to a younger woman and her sister’s announcement that she, too, is getting married soon. Even her best friend is taking that giant first step into relationships, love, and sex. Halley is flabbergasted by all this coupling; having lived through the greatest betrayal of her young life – her parents’ divorce – her ability to trust and to believe in "till death do us part" has taken a beating. Had she any doubts, all she has to do is look at her prickly, wounded mom (played winningly by Allison Janney), still reeling from her failed marriage. But then Halley starts hanging out with Macon (Ford), a scruffy, funny fellow high schooler, and she’s forced to rethink her ideas of love. How to Deal presents an almost absurd number of trials and traumas for its characters to overcome (including an illness, a car accident, a death, and a teen pregnancy) – and it’s just too much drama for one modest film to service adequately. In an effort to cram it all in, scenes abruptly jump from one to the next with nary a smooth transition in sight, relationships evolve far too quickly, and certain subplots drop out of the mix only to resurface, jarringly, much later. The script, by Neena Beber, could be funnier and snappier. Altogether, it’s a sloppily put-together film, yet How to Deal still connects in small but profound ways. In a market overrun with throwaway teen pics, this one actually has something important to say to its target audience. Most teen and preteen films settle into either the sanitized pop of Lizzie McGuire or the poppin’-the-cherry crassness of American Pie; How to Deal, on the other hand, presents a far more truthful portrait of the excitement and terror of the holy trinity of first kiss, first love, first sex. And with Moore’s Halley, the film has not only a worthy role model, but a realistic one as well. Halley may be muddling through – she acts out, sneaks out, sneaks a cigarette, and has her fair share of snit fits – she is above all an individual. Speaking, often scowling, as though she has a mouthful of braces, onetime pop singer Moore is somehow adorable and surly at the same time, and she gracefully dramatizes Halley’s strength and imperfections, her sometimes startling maturity and her frequent bouts of typical-teen petulance. Further, she is surrounded by a strong network of women – mothers, daughters, and best friends – none of whom are dealing terribly well, but all of whom would be so much the worse for wear without this support system. Structurally and aesthetically, How to Deal leaves much room for improvement, but spiritually, it hits the nail right on the head. 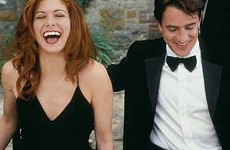 The Wedding Date
Inexplicable Fantasy Romances for the Harried Modern Gal 101 is a more fitting title for this shameless mediocrity.