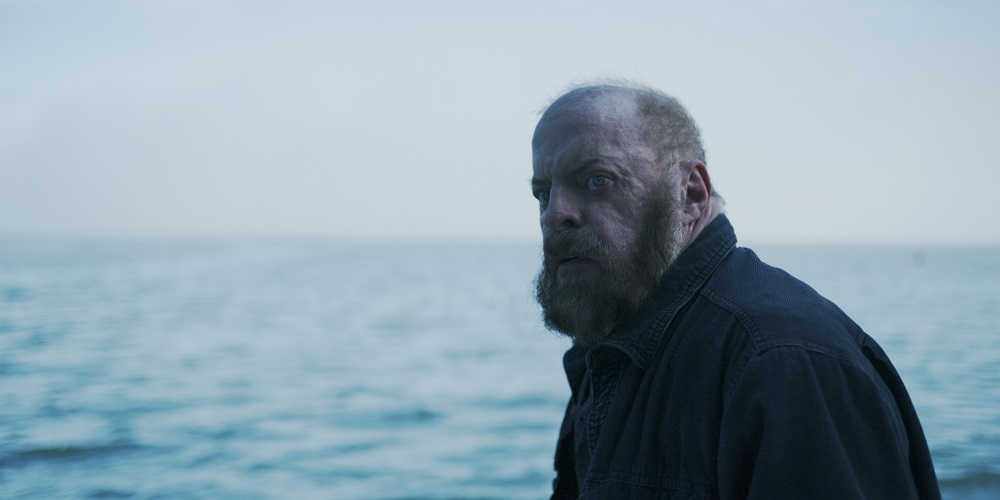 The sea and the sky, so it is written in the great book of cosmic horror, are two places that humanity has no place, and yet their implacable blueness is what we're sandwiched between.

In lo-fi aquatic nightmare The Block Island Sound, the terror seems to come from the sea. The title (itself a pun on the strait between Block Island and the coast of Rhode Island) refers to a strange, garbled, booming noise that plagues old fisherman Tom (Neville Archambault, best known as the creeping sex pest turn murderer in 13 Cameras). Of course, his family thinks that he's just losing his mind, because all the symptoms are there: the sleepwalking, the clumsiness, the accidental self-harm, breaking things, scaring the hell out of his granddaughter when his daughter Audry (Michaela McManus) comes to visit. His condition is a shock to her, because her loyal brother Harry (Chris Sheffield) has been doing his best to keep his father's decline secret. There's no sinister motive: he's a fisherman, from a line of fishermen, and that's not the kind of weakness you talk about in public.

The first feature as directors for siblings and American Vandal producers Kevin and Matthew McManus since 2012's Funeral Kings, it would be easy and fitting to slot The Block Island Sound alongside this year's other revelatory tale of the uncanny, Andrew Patterson's phenomenal The Vast of Night. Yet it could also find a berth alongside New England neo-noir Blow the Man Down for its very specific sense of coastal location, as well as sharing a kinship with Relic, and its examination of how mental decline and possession share so many traits. But this isn't unworldly, but otherworldy - or, at least that's what Harry's friend Dale (indie mainstay Jim Cummings, unrecognizable in his Lone Gunmen-style rants) claims.

Increasingly, the McManuses turn their eye to how this family disaster is affecting Harry, and Sheffield imbues the struggling man with a crumbling stoicism. He's tried so hard to protect the family, and it left with nothing to show for it, while Audry went to the mainland and got a respectable job. The heart of it all is this tension, as Harry contends with his father's decline and begins to wonder whether it's affecting everything else, or is symptomatic of something wider. The fish are dying, birds are plummeting to earth, and basic, everyday logic seems to be failing. The true tragedy is, as he contends with an unraveling universe, he clings ever harder to a pretense of normalcy.

The Block Island Sound is screening as part of the Fantasia International Film Festival in Montreal, Quebec, Aug. 20-Sept. 2, www.fantasiafestival.com.