Into the Woods With Gretel & Hansel Director Osgood Perkins 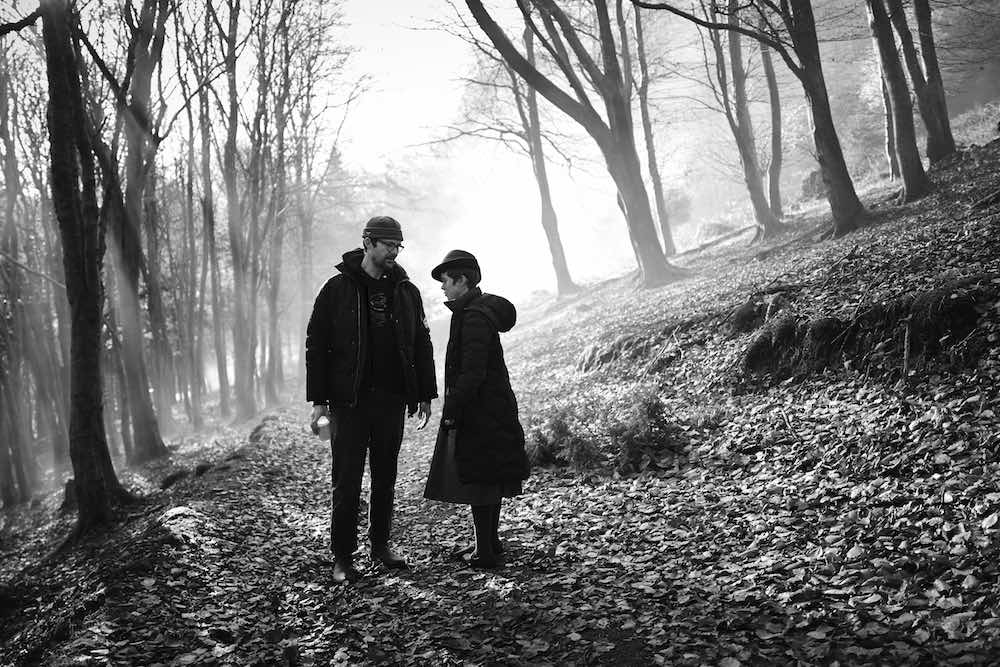 Once upon a time, there was a man called Osgood Perkins, and he decided to tell an old story in an old way. The story was very familiar, and that was what Osgood liked about it. After all, if a wolf's claws stay sharp, and a magical spinning wheel still can cast an enchantment, why change the spell?

This weekend sees the release of Perkins' Gretel & Hansel (read our review here), a fresh version of the German folktale made famous by the Brothers Grimm that takes the story back to its roots. Siblings Gretel (It's Sophia Lillis) and Hansel (Sam Leakey) are sent from their home and find the house of a witch (Alice Krige), who always has a full table. Suspicious, in a time of famine, but can the smart Gretel and brave Hansel find out the secret before they are on a platter?

Telling the story as it has traditionally been told seems oddly revolutionary. Blame, if you will, Angela Carter's seminal 1979 revisionist/deconstructionist collection of short stories, The Bloody Chamber, in which she turned once-safe fairytales – Sleeping Beauty, Bluebeard, Snow White – on their heads. Since then, just about every new interpretation of folklore has felt the urge to add additional twists. In Gretel & Hansel, Perkins strips that all away, taking it back to the core of the story and its original purpose. Fairytales were always educational fables told to children, with an element of salutary darkness (when Little Red Riding Hood flees from the Big Bad Wolf, it's not simply a metaphor – these were stories told by people who feared real wolves).

Yet that doesn't mean that the witch here is "just a hand-rubbing monster," said Perkins. "The term 'witch' has been appropriated as a positive monicker, as an indication of one's own value. 'I'm a blank witch' is such an announcement of what I'm good at, what I care about, what I connect with. So the fact that we could have the witch be just a witch, with her own complicated feelings about that, was one of the most important things about the movie."

AC: Well, I talked with Rian Johnson about how his film is what it is. It's not a meta-commentary or big updating, and you've done something very similar here in that it's a fairytale.

OP: We went straight for it. I guess I felt from the very beginning that the opportunity at hand was to make a movie for kids that was just a little too scary for kids, and the PG-13 niche of that, there's just not a lot of business in that department. So it seemed from the get-go that it was going to be, in one way or another, a kids movie. It's both kind of ludicrous and kind of expected that I would make this movie into some kind of adult horror movie, so I guess I was going against expectations with that. But it just seemed that it should be for kids, so it didn't need to be overly complicated or overwrought or messy. I didn't want to give kids another overwrought, complicated, messy film that talks down to them. I wanted to be straightforward.

AC: That makes the tone very important. Since fairytales are generally an oral tradition, they can be very bloody – and even then, granny is eaten by the wolf off the page. It's not just about cutting frames or taking the red out of blood to appease the MPAA and get a PG-13, but the very nature of the storytelling that makes it accessible to younger audiences.

OP: We were able to use the hundreds-of-years-old momentum of this thing because we could presume that everyone, whether you're 10 or 110, has this cellular memory in your system, So like something like Jaws, where the invitation is to bring your own anxiety, for us it was always that we know what this is. It's that beautiful tension that we all know what this is but no one's saying, and certainly no one's showing. 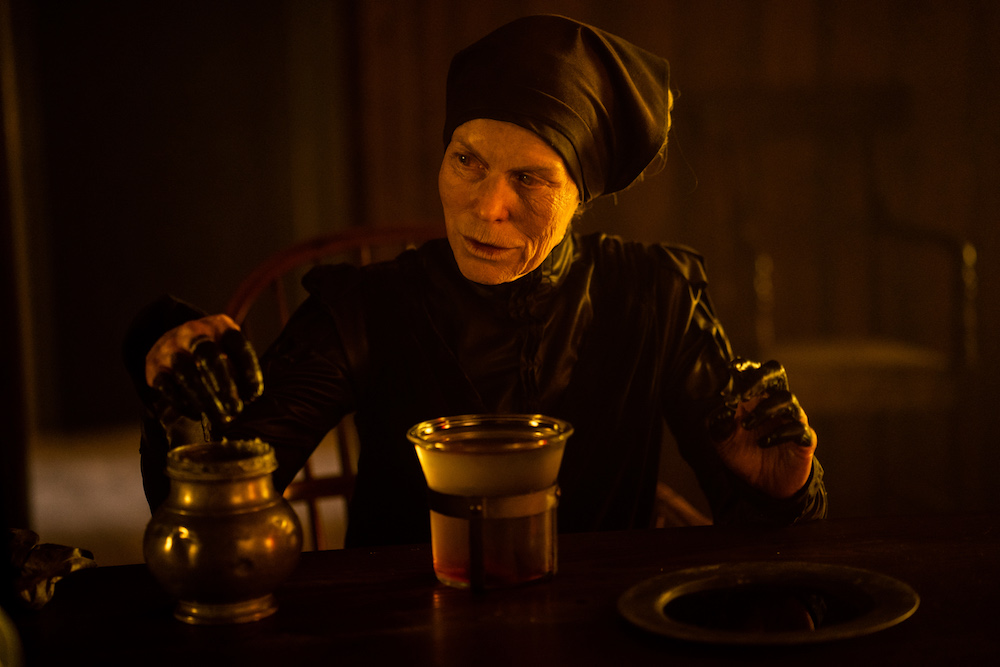 Sometimes a witch is a witch: Alice Krige as the child-eating menace in Gretel & Hansel

There was a bit in my draft of the script where Gretel has a strawberry, and she feels something in there but the witch distracts her and takes her mind off it – and it's a tooth. It was even for a moment just too much. We know what's in this food, so to show the tooth – we had it, we shot it, and it was great – ultimately the choice was to hold off on that for as long as we can, because the audience was providing their own tooth.

AC: One of the most striking aspects of the film is the design. Everything about the witch's house is at odds with with organic lines and soft tones of the woods and even the stone houses. It's razor-sharp lines, black and white - especially that incredible white basement, which seems to go up forever. Where did you find that?

OP: I'm so delighted that people think that's a room, because when you're on-set all the time those bricks will always be plaster or plastic or whatever they were, but we built that in Ireland. It's a mad set, and it was important to have flourishes like that because we're not stepping out of the Grimm narrative but we're not adding anything. We're just coloring in the bits where we thought it could be updated.

“People came to it with the expectation that we were going to be doing something that looked like Vikings or Game of Thrones ... As soon as I said to everybody, ‘Here are the rules – it can never be any of those things’ then that’s exactly what your designers want to hear. Because they’re all insane artists, and what they want to do is find the thing you’ve never seen before.”
The model for this is the room under the house in The Girl With the Dragon Tattoo. That feeling of, "I've got my house, and under my house is my work place." So that was what that was supposed to be. It was kind of like a refrigerator, somewhere where you would keep things, and kind of like a hospital. I felt like we needed these strong, visual cues which were kind of jarring because if we were going to behave ourselves narratively and stick to the Grimm version then we were going to have to hit those stylistic flourishes.

OP: Or the depth, since it's under the house.

AC: It just doesn't feel like it can fit in with the rest of the world, like it's fractured reality.

OP: Plenty of times I had the thought, "How did the witch build all this stuff? Was it bricks floating around her, or pieces of wood flying through the air and assembling house?"

AC: And you have these recurrent triangles. It's such a simple symbol but so powerful.

OP: When we got that metal triangle up to the top of this hill that overlooks Dublin Bay, we got up to this rocky thing that's been charred by fire and it's freezing and there's rain, and we managed to get this really impressive steel triangle up there, we all did behold it and go, "How is that not a thing? What movies is that?" Granted, it's a little bit The Holy Mountain, but not really.

It was one of those things where, in trying to keep as simply faithful to the narrative as we could, I wanted to say to the viewer, to the audience, "Trust us. We have this in hand. We're bold enough to do things like that, so you can trust that we're building a world that is completely our own, and we've thought about it, and we're being deliberate and a little bit brave."

When we were boots on the ground in Ireland, and the department heads started to come out of the woodwork and start to form around you, the most wonderful part of it was that people came to it with the expectation that we were going to be doing something that looked like Vikings or Game of Thrones or The Lord of the Rings, something like that. As soon as I said to everybody, "Here are the rules – it can never be any of those things" then that's exactly what your designers want to hear. Because they're all insane artists, and what they want to do is find the thing you've never seen before. So the Jodorowskyian witch with the hat, we looked at George Harrison's hats. That was the health of references I would bring to the costume designers. They're go, "What do the hats look like?" and I said, "Let's look at George Harrison's post-Beatles hats." So they're all wearing George hats.