Alejandro Landes on breaking the feelgood narrative of youth

Monos. It's the Spanish word for monkeys, and also the title of the third film from Colombian director Alejandro Landes. With its sense of tumbling, animalistic chaos, it's an apt name.

Landes' work has been defined by his attempts to understand people who may, at first glance, be unsympathetic. His first film, 2007 documentary Cocalero, went behind the headlines of the drug wars to look at the Bolivian farmers growing coca as a cash crop; in 2011's Porfirio, he took the daring step of casting Porfirio Ramirez, the wheelchair-bound victim of police violence who hijacked a plane to get a meeting with Colombia's president, as himself in his own biopic.

Yet while he explores and humanizes these characters, he doesn't turn them into cardboard victims of circumstances, or morally correct antiheroes. His portraits are unflinching and unflattering, and that trait continues in his latest film. Monos follows a gang of Colombian child soldiers – their allegiance and origins unclear – who have been assigned guard duty to a kidnapped foreigner (Julianne Nicholson).

So why Monos? Because the film (which opened in Austin this week) feels like a wildlife documentary, catching the behavior of the troupe of young troops. Landes embraces his unconventional approach, one that has undercut the expectation of some viewers and critics. When they hear the subject matter, he said, "There's a paternalistic, almost medicinal approach, going, 'OK, it's a film with child soldiers so it should be told in an almost United Nations fashion, with a social impact campaign attached. We'll solve this third world problem.' But while I did spend four years of my life to try to say that child soldiers are a bad thing – that's a pretty obvious thing – based on that premise let's take it one step further."

That step is to narratively decontexualize the story. There are none of the tropes of the genre – no opening sequence of a child being stolen from their parents, no scenes of them being brutalized in training, or their first moment of violence, or their moral reawakening. Landes said, "The typical child-soldier film is built not on what the character does but what happens to the character – all these externalities – and it's built on pity. They kill the parents, and it's pity, and pity, and even more pity. But some of [the kids] might embrace it, some of them might have made the decision themselves."

Austin Chronicle: It's a thing American cinema is kind of afraid of, this idea that kids aren't necessarily nice. They can be the bullied, the bully, but most likely both at some time.

Alejandro Landes: I don't know if you've been a new kid in school, but I have, and that's a very rough experience.

We were the centerpiece at MOMA for a screening, and so there were a lot of very dapper people showing up. There was one guy with a tie and a blazer, and he was looking very nice, and he came up to me with his wife and said, "Well, my daughter goes to this very elite private school in Manhattan, and this reminds me totally of her school."

AC: You've talked about having worked from an unconventional casting process, of gathering a large group of potential performers and whittling it down to a group that you felt worked together.

AL: Those dynamics – the shifting of alliances, the lust for power, of people taking the reins in different situations, that pinball machine of a fluid point of view – that was written. But I think it was about choosing the people, and readjusting the screenplay to make sure that that could work.

And in part, as cerebral as that sounds, a lot was just intuition, a feeling that that person could arrive at those states. Asking a little girl like Swede (Laura Castrillón) to arrive at those emotional moments was very intense: but Bigfoot (Moisés Arias), on the other hand, felt that he couldn't be a cartoon of a bad guy. He liked the idea of someone who has a lust for power, but that's very similar to a desire to be loved. It's a very thin line.

That was the hardest part of the film, because more classically structured films are designed for you to experience the world through the eyes of one person, one or two heroes that you're supposed to love, quote-unquote. The idea was not to give you that, but for you to really feel the spirit of the group, and when that group starts fragmenting that should feel emotionally impactful.

But for you to get to know each one of them, I got to know them and let in a bit of each one because each has limited real estate on screen: Like Smurf (Deibi Rueda), I knew that he did Capoeira; Rambo, I knew that (actress Sofia Buenaventura) loved her brother first and foremost in the world, so there were scenes with that. So those moments prior to shooting were key. 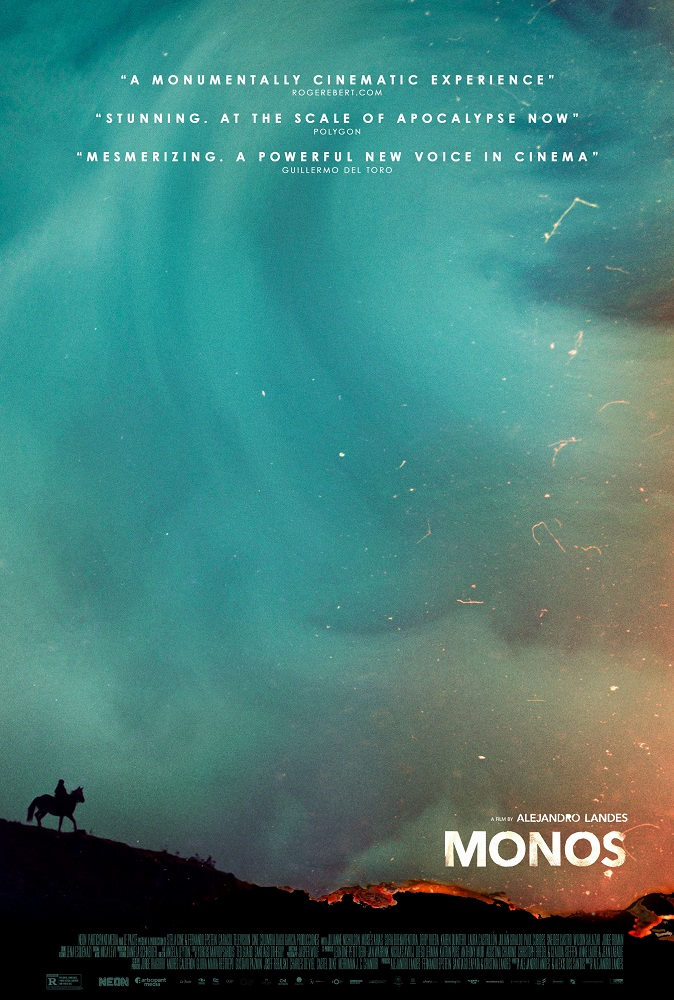 "I love [it]. It has a lot of negative space, and it forces the allegory." Alejandro Landes, director of Monos, on why the poster for his film is so much more than just a piece of advertising.
AC: You mention not having to really like every character, even if they're central or even a protagonist. That's a conversation I've had with several directors recently, including with Rick Alverson about The Mountain, about the line between empathy and sympathy in film. For a long time, it felt like filmmakers were afraid of not having an avatar for the audience.

AL: It's the notion that you have to build a character in a very novelistic way, and you know where they come from, and justify why you should like them – because the father died, or the mother was like this, or this happened to them when they were young. I thought Monos was an exercise in presence. [Other films] give you a back story because those are things that many times inform your prejudices. "Oh, so where are you from, and what's your last name, what did you study," because that way I start thinking I know who you are because I'm building all these stickers from all these labels. But if I just get to know you ...

I think that's why war is such a window into human nature. All of a sudden you meet someone, and you don't have that typical dinner chatter because you're in the trenches. That's why people go off to war and they're only together six months and they become brothers of life.

The idea of negating all that information was key. Even in more plastic arts, like sculpture or monuments, the idea of positive and negative space. God forbid, we're all in the house, the ceiling drops and we all die. You have the option of building a monument, erecting a plaque that says "On this day an earthquake happened and all of these people died, God take care of them." Or you could just leave the trash site, or leave the footprint of the building and anyone who comes by will see it forever. They might not know exactly what happened, but they'll feel something in the pit of their stomach.

AC: And a lot of artists are terrified of negative space.

AL: That's why I love the Monos poster. It has a lot of negative space, and it forces the allegory. It's very subversive to go at it that way. It's easy for you to go, "Wait, I don't know, I don't understand," but I think cinema today has to come in through the skin, through the stomach because it's not just by knowing. It's the no-place, creating the negative space for something to happen.

AC: And yet so many storytellers feel they have to paint out to the edges, to give all the details. It's like they don't trust the audience.

AL: You've seen it time and again, in the second or third act someone says, "My father did this to me," or "My mother did this to me," and you justify the actions of the character through what happened, you do a little Freudian psychoanalysis at the end of the third act, and the idea was to avoid that.

I think people are more comfortable with the idea that war is for reasons, war is something we can write papers about. Sometimes wars start for personal reasons, and it's more about us as a species. The main paramilitary group in Colombia started because, one day, these two little boys, a guerrilla came in and killed their parents. From then on they raised a paramilitary army.

I've seen these critiques of the film that go, "Well, war is structural." Is it? Is it so much? ... It was very special when the film showed in Berlin, because there was this crowd of English kids who had come over to watch it, and one of them said, "This is the Apocalypse Now of our generation." I asked him after what he meant, and he said that war had had this ideological thing, like "Stop Communism" or the Domino Effect, but you ask now and you don't know what's going on in Afghanistan, why we're fighting, when it's going to stop, and who are our allies, who are not. It's shifting all the time and, for lack of a better word, there's a real fog of war.

Monos is in theaters now. For review and listings, see our Showtimes page.