A War on Passivity: Rick Alverson and Tye Sheridan Climb The Mountain

The confrontational director challenges audiences to work once again "To do anything interesting, it has to be awkward and it has to be confrontational." Rick Alverson isn't simply telling stories in his latest film, The Mountain, starring Tye Sheridan (left) and Jeff Goldblum.

"Bloated, pacified bodies, fed on a steady diet of anasthesia." Rick Alverson is blunt in his description of his nightmare audience, and his latest film, The Mountain, employs A-list headliners (Jeff Goldblum and Tye Sheridan) to shake them from their passive stupor

The story of the film is superficially simple: A young man, Andy (Sheridan) finds himself functionally orphaned after his father (Udo Kier) suddenly dies. With his mother in an institution, he falls in with the surgeon who performed the lobotomy on her (Goldblum as Dr. Wallace Fiennes, based in no small part on Walter Freeman, the godfather of the transorbital lobotomy). With the procedure starting to fall out of favor, he becomes an itinerant consultant, traveling from town to indistinguishable town like a snake oil salesman, with Andy in tow.

At least, that's the surface. Alverson doesn't spoon feed the audience anything. Intentions are subtextual. Environments are intentionally artificial. "Everything in this film is against the grain," said Sheridan, who described its intention as "to get to beneath your skin, and make you think, 'America,' really. This movie really challenges the idea of a utopian society, and these deeper themes and deeper ideas are not so easily digested on the surface."

Sheridan first worked with Alverson on his last film, 2015's Entertainment, and the Elkhart-born star of Mud and Joe (and now an Austin resident) called the director "a brave and bold filmmaker. His goals are not skewed by the perspective of others, and that allows him to tell such unique stories that are true to his voice."

Take his 2012 collaboration with Tim Heidecker, The Comedy: It inspired wildly contrasting reviews (even in these pages, between its SXSW premiere and final release), but the director was not prepared to let audiences respond as they would, and let the matter lie. After a scathing write-up from the New York Times, Alverson called the review "asinine, and it also showed a complete and utter lack of real attention to critical discourse," while Heidecker described it as "A.O. Scott's retirement letter from the world of serious film criticism."

It's not that Alverson is breaking new ground: for him, it's that criticism has forgotten how to deal with the unconventional. He points to the grand tradition of directors like Robert Bresson, Orson Welles, John Cassavetes, and Elaine May, who created "challenging, although consumed cinema. These were people that were asking big questions, question about our relationship to the medium, formally and through performance and narrative. How narrative can break, and what use does it have?"

Alverson's work is angular, obtuse, unconventional, and deliberately so. "To do anything interesting, it has to be awkward and it has to be confrontational." He even takes issues with the very concept of a well-told narrative: Who defines what is well-told? What is effective story-telling, and is regarding story as the be-all, end-all, limiting and formulaic? "When it works, it's a pop song. It's a form that hits all of the notes and delivers them. You can have different content in them, but it's still a pop song." The failure to continue in the textual traditions of Bresson, Cassavetes, Welles, and May has turned film into "recorded, craftily evolved theater," and he sees the creative edges curling up. While he understands the appeal of Quentin Tarantino's "referential nostalgia ... That is a sign of a dying art, if I've ever seen one."

If there's a polar opposite of the lead character as wish fulfillment, it's Andy. He is not simply passive: He is a reactive presence, often a void, constantly difficult to read – a dead space as others act around him. In that, he is more like real life, yet it posed challenges for Sheridan as an actor: To be a constant presence that is defined by their lack of impact on what is going on around and in front of them. However, that seeming passivity is what attracted him. "The movie is objective to a lot of the ideas that it explores, and a lot of that comes through [Andy], Sheridan said, "His experience throughout the film is almost parallel to the audience."

The biggest challenge was arguably in his fellow cast members. Goldblum, Kier, and Denis Lavant, all performers who can swallow a screen, and potentially leaving little room for Andy. "That was something we talked through," said Sheridan. "What's going to allow us, as an audience, to feel that he's alive inside? I think we feel emotionally tethered to him because we're almost on the same wavelength. He's seeing all these crazy characters, whether it's Denis Lavant, who represents some form of belief in religion or spirituality, or Goldblum, who plays a character who has taken advantage of white male supremacy in mid-century America. It's his reaction to these characters, which is similar to our reaction watching those characters on screen "

Alverson was not concerned that Andy might become a background figure in what is nominally his own narrative. "If anything, he's a foreground feature that you have to crane your neck around, to see some kind of vitality at the edges." 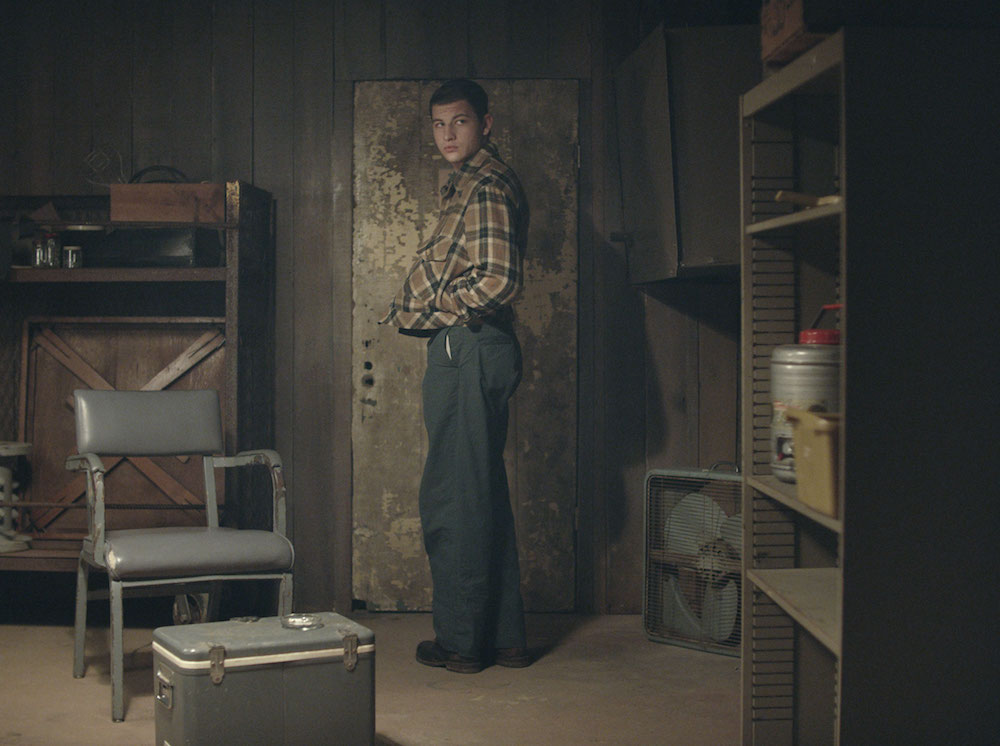 "He's a foreground feature that you have to crane your neck around, to see some kind of vitality at the edges." Rick Alverson on Andy (Tye Sheridan), the passive central figure in The Mountain

The Mountain is undoubtedly a watershed film for Alverson, both in scale, context, and creation. Take the script: Sheridan called what he first saw as the first draft as "a 30 page outline. ... It was big and poetic and beautiful." However, if that was an earlier Alverson film, that would be the script. The director explained, "I would write signifiers, and a directional, conceptual framework for what's being expressed, and then I would cast based on certain influences, and certain expectations of the way that people spoke." However, because The Mountain deals with cinematic tropes, he instead wrote a traditional script - adopting the form to confront it. Alverson said, "I realized very quickly that it had to be hyper-manufactured, with a stilted, cinematic, artificiality to it – fully scripting the dialogue, and leaving out those sparks of realist reflexivity."

Not that his earlier work was simply freeform. Even though the shooting script for his 2015 feature Entertainment was typical of his earlier approach (emphasizing theme and structure over the confines of dialogue), the process of production and blocking was "pretty composed ... I would move [lead actor] Gregg Turkington a quarter of an inch left, and ask him to part his lips, or close his eyes. But inside that there was a lot more chaos."

For Sheridan, as an actor, that's how Alverson both defines and finds the space for the performance. "Rick is very good on staying on his toes," he said. "He like to explore something and find what it's wanting to be. Of course, there's a lot of conversations about what beats we want to hit, and what we're trying to achieve, but the small specifics sometimes just present themselves on the day of the shoot."

The Mountain feels deliberately constructed in a different way to Alverson's earlier work: crafted, designed, measured in a manner that references fine art as much as it does cinema. It's hard not to see the brush strokes of late-period Edward Hopper, or Andrew Wyeth, or Caspar David Friedrich. One moment, during a lobotomy session, seems to evoke Rembrandt's The Anatomy Lesson of Dr. Nicolaes Tulp: it's nothing so gauche as outright reference, but the same feeling of a knowingly staged scene. Tulp, a leading physician in Seventeenth century Amsterdam, is shown explaining the musculature of the arm to his students: But what Rembrandt really creates is a scene of Tulp and his students posing for his painting. It's not "real," and neither is The Mountain.

"I wanted it to be a wax museum," said Alverson. "This idea of access to historic representation, where the audience is pseudo-informed, and walks away going, 'I know what it was like in mental institutions, I know what it was like in this era.' There is nothing more nonsensical in the world than a representation that perceives itself as authentic, when it's very much an artificial construction."

The Mountain is in cinemas now. For review and listings, visit our Showtimes page.