There’s something evil in the woods

Every Northern European culture knows that Robert Frost was wrong. The woods may be dark and deep, but they are far from lovely. In Irish horror The Hallow, they are the wild places, the ancient places, the realm of the fey, and no place for human folk. 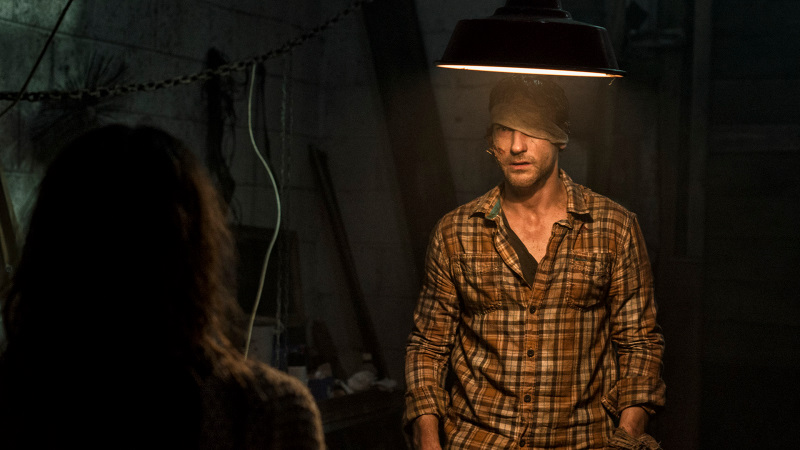 Things that do more than go bump in the night in Irish horror The Hallow, out now from IFC Midnight

Unfortunately, that’s exactly where Adam (Joseph Mawle, Game of Thrones, Ripper Street) and Clare (Bojana Novakovic, Drag Me to Hell) find themselves. He’s a forestry scientist, sent to map an ancient forest that’s set for sale and clearance. The couple are living in a semi-abandoned farmhouse, making it suitable for themselves and their baby Finn. It seems like the standard fare of unwelcoming neighbors and grumpy locals upset at these outsiders, headed into Straw Dogs or (more recently) Eden Lake territory. But it’s quickly clear that the locals are not protective of the woods. They are terrified of them. And if you’re this close to the places that they fear the most, then maybe leaving the iron bars on the window, and not disturbing what dwells in the shadows, is best for all concerned.

In The Hallow, home FX expert turned stop-motion animator turned music video director Corin Hardy sends an unapologetic love letter to the creature feature. Honestly, this should be the start of a beautiful romance. Irish horror is on a blinding streak at the moment, with Citadel, Let Us Prey, and From the Dark pretty much essential parts of the modern terror canon. Hardy’s debut is right up there, delving deep into Irish mythology.

Much like From the Dark, the story structure is of discovery, flight, and then fight. But it’s given an added sense of peril because of the relationships, and the way the family is portrayed. Adam doesn’t suddenly become a superman, nor does Clare go all momma grizzly when the faeries come for their bairn. Instead, their relationship as young parents, secluded, amid the quiet they crave that suddenly turns on them, is laid out in small details by Mawle and Novakovic. With the overhanging sense that pervades all Northern European mythologies, there’ll be price to pay for their intrusion, and it speaks to the depth and poetry of their performances that neither seems disposable at the benefit of the other.

What makes it really special (beyond the practical monsters: imagine an evil, distorted Groot) is that mythology. It’s not simply that it’s a rich milieu to explore, but Hardy creates a new logic, deeper than just saying “magic” and shrugging. This is a supernatural home invasion movie, and the invaders are all the more terrifying by giving them a biological and evolutionary logic. That’s why Jaws is scarier than the Loch Ness Monster.

Hardy (who co-wrote with All the Boys Love Mandy Lane producer Felipe Marino) manages a melding that is both grounded and unearthly, that makes changelings and banshees, leprechauns and slaugh, into something that can’t be exorcised, but must be fought with iron and fire. Because make no mistake, these are no twinkling pixies. As Garda Davey (played by Irish acting lucky touchstone Michael Smiley) explains/warns, this is the countryside, where things really do go bump in the night.

Tweens being tweens is the scariest part of #Horror

#Horror (IFC Midnight) is an attempt to make a contemporary shocker that melds the ubiquity of social media with the unrelenting claustrophobia of early Mario Bava, and the social commentary of Mean Girls. Attempt is the right word, because writer/director Tara Subkoff’s feature debut is a great idea hamstrung by one terrible decision.

Actually, two. First It really doesn’t need to be a horror, because it’s really an interesting social commentary. A bunch of rich 12-year-old girls gather for a sleep-over at one of their parents’ homes (which happens to be filled with lots of modern art, for no good reason), and start to turn on each other, then bond, because that’s what kids do. But then there’s a slasher subplot that makes zero sense.

When Subkoff locks her protagonists in the house and lets them talk about the complexities of growing up with social media, it feels honest and interesting. But the And Then There Were None narrative owes a bigger debt to the giallo genre’s acceptance of plot holes than its sense of creeping dread.

The script also somehow secured a trifecta of former teen icons for micro cameos to prove, as Will Smith once surmised, that parents just don’t understand: Timothy Hutton, who seems to be reading his lines of a blackboard off-screen; Natasha Lyonne, who may have dropped by on her way to the set of Orange Is the New Black; and Chloe Sevigny, who turns up wearing Julia Adams’ swimsuit from Creature From the Black Lagoon and a house coat with origami birds on it because you know, art.

The real downfall is in the misguided interjection of a social media game, with sub-Candy Crush Saga visuals created by Subkoff’s fellow conceptual artist Tabor Robak. None of it works, it’s annoying as hell, and it’s a misguided attempt to add a degree of relevance, like Principal Skinner trying to bond with Bart Simpson, or Mugatu turning up in the middle of River’s Edge. 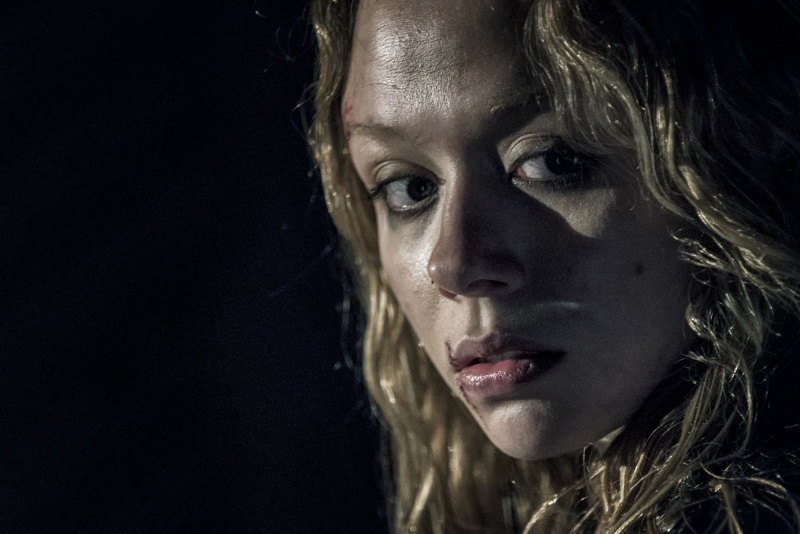 Deals with the devil bear rotten fruit in Cherry Tree

While #Horror posits evil as a human creation, Cherry Tree (Dark Sky Films) goes into the realm of the supernatural. It comes fortunately in the wake of The Witch, but is a contemporary take on the spellcasting craze. In this Irish/Dutch co-production, the action has been transferred to Orchard, a small town with a dark legacy of witchcraft, supposedly going back to when a coven received the titular cherry tree from Old Scratch. The legend has faded, but the witches haven’t, and they go to schoolgirl Faith (Naomi Battrick) and strike a bargain with her: bear Satan’s child, and they’ll save the life of her cancer-riddled father (Sam Hazeldine.) Seems like a perfectly reasonable bargain, what can possibly go wrong with that?

Cherry Tree is one of those projects that flirts with brilliance, but never quite lights that passionate spark. The repeated symbolism – crushed cherry flesh, and venomous centipedes that work the Devil’s will – is entrancingly innovative, and the final act is intriguingly nightmarish, with clear nods to Clive Barker’s Hellraiser. But when it becomes clear to Faith that her that her hockey coach Sissy (Anna Walton) is an immortal bride of the horned one, and that she truly will be bearing the Antichrist, it doesn’t matter how much she loves her father: it doesn’t seem plausible that she’d even come close to going through with the pact.

It’s such a strange character beat, an inverted Rosemary’s Baby moment, that it pricks the bubble suspending any disbelief. It’s disappointing, because director David Keating was at the vanguard of Irish horror with Wake Wood. His latest suffers from the converse of the problem with #Horror: that worked best when it was a heartfelt teen drama. Cherry Tree is at its strongest when it is at its most visually baroque and outright horrifying. It just needs to be a little less Lords of Salem. 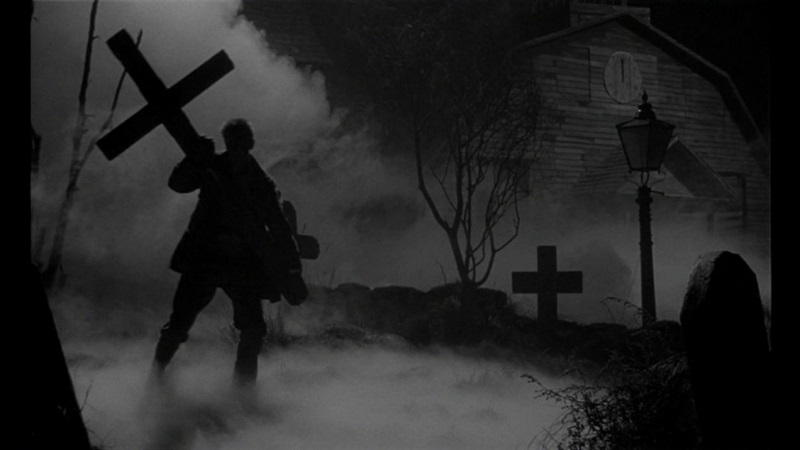 Black and white nightmare: City of the Dead

Speaking of Rob Zombie, if you’ve ever wondered where he got the Christopher Lee sample at the beginning of “Dragula,” then wonder no more. City of the Dead (VCI Entertainment) may be better known to most American audiences as Horror Hotel, the title under which the edited version of this 1960 supernatural horror clogged up drive-ins in 1963. With shades of Night of the Demon (and an unexpected trick nicked straight from the freshly-published Psycho), it’s an oddly ill-remembered tale of New England sorcery. Nan Barlow (Venetia Stevenson) is a coed who travels to the remote New England town of Whitewood to research its history of witchcraft. She quickly discovers that it may not be history, but a more pressing menace.

After this, John Llewellyn Moxey would establish a stellar three decade career as a TV director on everything from The Saint to Mission: Impossible to Murder, She Wrote, but horror fans probably know him best as the director of The X-Files inspiration Kolchak the Night Stalker. Here he proves himself to be a master of set-bound Gothic. The production always feels like it’s in a studio, often giving it a TV play feeling, but that’s not a bad thing. Imagine a noir take on a Roger Corman Technicolor horror, and that’s the sensation of brooding malice evoked. It’s the supernatural as unnatural and illogical, unnerving because it’s just off-kilter, like when Nan walks into a room where music is playing, and it stops without reason.

As for the cast, this is vintage Lee, in the middle of his run at Hammer (catch a fascinating interview included on the disc, explaining why he passed on another run as Frankenstein’s Monster.) He’s perfectly aristocratic and brooding as the professor who sends Nan into the witches’ clutches. It’s also arguably Stevenson’s biggest role: she was kind of a victim of the studio system, one of RKO’s last contract players whose career never recovered from its demise, quitting showbiz entirely after her marriage in 1962 to Don Everly. Here she’s pitched between the girl-next-door innocence of Sandra Dee and the glacial maturity of Kim Novak, adding an intriguing depth to what could have been a dull ingénue part.

More tragic is that this is one of the later cinematic roles of British stage and screen character actress Patricia Jessel: forever enshrined in cinema history for her hysterically dry turn as the shrewish Domina in A Funny Thing Happened on the Way to the Forum, she died at age 48 in 1968 of a heart attack. But her performance here – dual performances, actually, as the enraged and vengeful Elizabeth, the witch set to burn in the pre-credit sequence, and the haughty and menacing Mrs. Newless, the owner of Whitewood’s only hotel – is an overlooked gem of the genre.