Star and director talk monsters, mud, and New Kids on the Block

A woman. A man. An abandoned farm. A monster. When writer/director Conor McMahon created new vampire flick From the Dark, he deliberately stripped its down to the barest of bones. 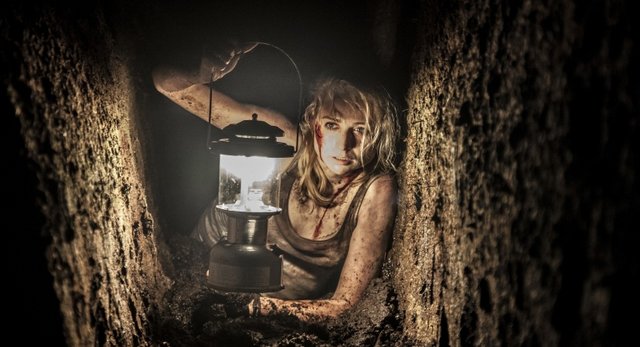 "Every day, you would get on to set and you're completely clean, and then the costume and makeup get hold of you and you're getting spritzered with mud." Niamh Algar, star of Irish horror From the Dark, on surviving the slime.

McMahon is part of the new wave of Irish horror directors like Jon Wright (Grabbers), David Keating (Wake Wood), Ciarán Foy (Citadel), and honorary imports like Marina de Van (Dark Touch). Both North and South of the border, it's become the burgeoning scream scene, much as it seemed each Asian nation took its turn last decade.

It's a change for Irish cinema, which had been stuck churning out historical literary adaptations, dour social commentary on the war between North and South, and cutesy comedies. After a decade in the gory low-budget trenches, McMahon really established his reputation 2012 comedy-horror Stitches. However, he admits he was late to the (slumber) party (massacre), and wasn't even allowed to see fear films until he was 17. "I watched Evil Dead II and suddenly I was hooked. I had been deprived of horror for so long, that when I saw one I was mad to watch every one. To some degree, that's sort of what's happening in Ireland at the moment. Because my generation that might have been more into the video nasties and the Eighties movies, that generation is starting to make films now."

He gained underground plaudits for his 2004 zombie attack Dead Meat, and From the Dark feels like a more mature take on the same issues: a supernatural threat in a remote, Irish rural location, shrouded in the pitch blackness of a country night. Niamh Algar and Stephen Cromwell are a couple on a nice weekend break who suddenly find themselves besieged by vampires, and not the washboard abs, sparkling-in-the-daytime kind. McMahon's beasts have been staked to the ground for millennia, and are more Nosferatu than Cullen.

Their roots lie in the strange phenomenon of bog bodies, whereby corpses submerged in peat bogs are embalmed by the chemicals in the water to eerie perfection. Found all across North-Western Europe, and some dating back thousands of years, several of the best preserved have been uncovered in Ireland. McMahon said, "The thing that interested me was a lot of the bog bodies, they weren't just people that fell in. They were ritualistically killed, or their hands were tied, or their heads were cracked open. A lot of them that were found were murdered. That occurred to me, what if there was a reason why these people were killed?" Austin Chronicle: Coming after Stitches, this feels like much more akin to your early straight-ahead horror like Dead Meat.

Conor McMahon: You never really know what the next film you're going to make is as you go film to film. It was definitely on my mind, after doing Stitches, which was comedy horror, I wanted to try my hand at a more pure kind of horror, to try and play around with scares. I like all kinds of horror, so I would like to make every kind of horror that I can, and that's what motivated me initially. OK, I've done a comedy horror, now I'll do a scary horror, I might jump back to a comedy horror or any other kind.

AC: And you pare it down to the absolute bare bones minimum. You're just there, there's no side plots or diversions. I was wondering about the process of refining it down to something so efficient.

CM: That probably came out of the concept. I'm a big fan of The Blair Witch Project, and sometimes the scariest films I could think of were ones that were very pared down, and not a huge amount of characters. I think when I came up with the idea of the light, and the characters trying to find new light sources, it kind of lended itself to just having two characters in a house, and watching how they're going to move from one place to the next. The more people there are, the less scary it is, because there's more people to rely on for help, so I thought having two people on their own might be scarier.

CM: Exactly, and we knew it wasn't going to be that kind of a film, kind of a gore fest. I didn't need all those people for the body count this time around.

AC: Niamh, how many clues where there in the script, and how much was hammered about between you and Stephen?

Niamh Algar: There's always clues within the script, the choices you have to make, coming from a realist's perspective as to why she chooses to finally go ahead and do something. But myself, Conor and Stephen, we workshopped for a few weeks beforehand, developing the characters' relationship dynamic before going into the shoot. So when it came to actually shooting, if things had to change, it was very disposable, and very easy to access. Inspired by the bog bodies of Ireland, From the Dark director Conor McMahon asked himself, "What if there was a reason why these people were killed?"

AC: Was there anything that came out of the workshopping that really informed or changed their interactions?

CM: There were a couple of scenes where we really figured out how to get them to play. I'm remembering one scene in particular, where Niamh runs up and hides after Mark is turning on her. That scene was initially more of a conversation, and we tried it a couple of times, and it wasn't quite working. When Niamh ran up and hid, he was having the same conversation with her, but it had this extra tension to it. There's just these little things that you just find when you workshop, that you stage in a certain way and get more tension out of it. Certainly the opening conversation, we were practicing that on the way down to the shoot. We were running the lines during the whole drive down.

NA: What you can workshop in a studio with two people sitting at a table and running the lines, it totally shifts once you put it in the dynamic of a car. It changes from the script to the workshop to the screen.

AC: The location is such a key part of this film. How did you find the farm house and the bog?

CM: Sometimes you're just blessed with this series of happy events. I'd literally just met a friend of a friend, and the next day I put up on Facebook, 'does anyone know where I could find a bog where we can shoot this film?' He replied to me, 'oh, I own one.' So we drove down to Laois, which is a county in Ireland, and he went, 'oh, you might want to check out this abandoned farm house just down the road as well.' So in the space of a day I'd found the bog and this old, abandoned farm house as well.

AC: Hopefully not too abandoned. Where there are rooms you were worried about going into because the floor might collapse?

CM: Well, the scariest thing we saw was, because nobody had lived in the house since the mid-Nineties, there were faded posters of New Kids on the Block on the wall. Don't go in that room.

AC: What's really effective is that it catches how muddy and soggy a place like that is, and it's not just cinematic grime.

CM: We shot one or two scenes at the very start of the shoot, after they had gone through the bog, and the makeup people were trying to predict how dirty to make them. What was funny was, when we actually shot the scene where Mark gets pulled into the bog, he comes out and he was completely clean. The bog water had completely washed him off.

NA: Every day, you would get on to set and you're completely clean, and then the costume and makeup get hold of you and you're getting spritzered with mud.

CM: I'd get real mud and put it on their face.

NA: Conor was all about the realism. But there was a day at the very start when we shot that very opening scene, and then we went on to shoot all the muddy stuff. Halfway through the shoot, we went back and did a couple of pickup shots of that opening sequence when we were clean. Myself and Stephen arrived at the set, and people were looking at us going, who are you, because we're used to seeing you all covered in dirt.

CM: It was about two weeks into the shoot, so the makeup had to cover all these bruises and scratches they'd got over two weeks of running around.

From the Dark (Dark Sky Films) is released on DVD, Blu-Ray, and VOD on April 14.