Kickstart Your Weekend: 'The Intergalactic Nemesis' 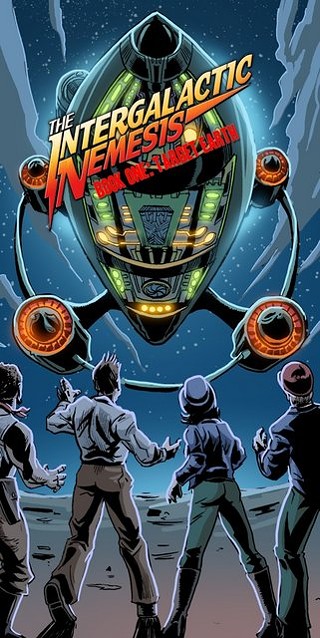 The Intergalactic Nemesis, coming to an Internet near you soon!

Its stories may be a throwback to the golden age of radio, but transmedia phenomenon The Intergalactic Nemesis wants to make the bold leap into the Internet.

If you don't know The Intergalactic Nemesis, where have you been for the last two decades? An homage to pulp adventures and radio drama, it began at the original Little City Coffee Shop on the Drag, before expanding via Salvage Vanguard, courtesy of writer/director/star Jason Neulander. Since then, it's been a live show, a KUT radio drama, a graphic novel, and now it has become the world's first live-action graphic novel.

What's one of those, you ask? Well, the show (technically shows, since the Nemesis is a trilogy) involves hundreds of comic-book illustrations projected on a screen, while the cast does live voice-overs, and the inestimable Buzz Moran provides live foley sound effects. After ecstatic receptions at the Long Center, that multi-headed, mixed-media leviathan has been storming around the nation, including a stop by Conan O'Brien's studio and a Broadway run.

What the mad scientists plan to do next is recreate that live experience as a webseries. At 2pm on April 19, they will record the full original show, Target Earth, at the old Austin City Limits studios on the UT campus. That live soundtrack will then be edited over the comic book images, and the whole live/animated deal will go online at YouTube in 17 five-minute episodes. After that, it will be broadcast in full on Austin's PBS station KLRU and released as a DVD.

The Intergalactic Nemesis is no stranger to crowdfunding, but here's the big boost: The local PBS affiliate will match every dollar given, up to the first $20,000, meaning your donation will go twice as far.

You can contribute and find the full list of perks here.