Family History Gives Clifton Collins Jr. the Role of a Lifetime in Jockey 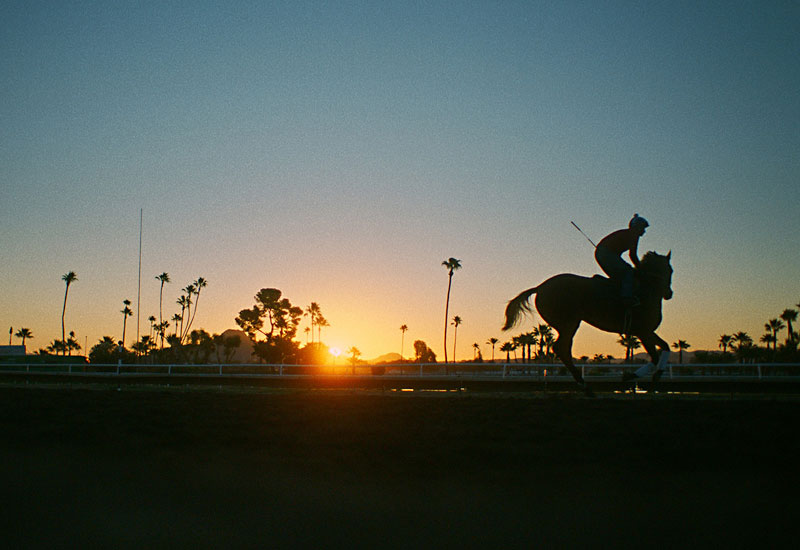 Sometimes there's only one performer for a part. Filmmaker Clint Bentley met Clifton Collins Jr. on the set of his debut feature, 2016's Transpecos. The multitalented character actor played a small part as a border patrol officer, and while he was only on set for a couple of days, Bentley said, "We knew that there was so much more that he could give as an actor than the roles he was being given. ... Then we got to know him as a person, and we wanted to show the Clifton we knew."

In their follow-up, Austin Film Festival selection Jockey, Collins plays Jackson Silva, a seasoned but battered rider working the lower levels of the racehorse circuit. It's a tough life, and one that Bentley knew well, as his father was a jockey. "I really wanted to show this world to people," the Dallas-based writer/director said, crediting his Austinite co-writer/producer (and Transpecos director) Greg Kwedar for the idea of Silva as a man in a sport that's ailing just like him. "You see a lot of racetracks that are mostly empty, so it was a really nice opportunity to let the character's journey mirror what that world is going through."

Bentley always saw Collins as Silva. He said, "I can't think of an American actor who could pull that off, disappearing into a scene with first-time actors, and real jockeys, and real trainers [but] also having a real huge moment where he's got to show the frailty of that character, but also the strength." Plus, he truly looks the part. "He looks like he could be a working-class jockey, and that's just his face and his body language."

Kwedar praised Collins as a true collaborator, working with them through the research and development process, but also bringing his own life experiences that they found paralleled Silva's arc: "Some very tragic with his own father, but also this beautiful acting tradition from his grandfather, who was in movies with John Wayne and Groucho Marx."

“Even if they never fall, and I don’t know if there’s a jockey out there who has been that lucky ... it’s that life of stress.”- Clint Bentley

For Bentley, it was vital that Jockey not simply re-create the experience of the racing life, but the damage to their bodies. There's one pivotal conversation that explains the jockey's attitude to pain: "'Well, I've broken both my wrists, I've broken my legs, I've broken my collarbones, I've broken my nose so many times that I've lost count, but I've never been hurt bad.'" That's not screenwriter's hyperbole. That was verbatim from a conversation they had during research with a 23-year-old jockey "who looked 28," said Bentley. So what did he count as bad? "Bad is not what is injured," Bentley said. "Bad is, 'Can you ride or not?'"

But it's not just accidents. Being a jockey is inherently grueling, keeping under 125 pounds while still staying strong enough to control a half-ton of horse at 40 mph. Bentley said, "Even if they never fall, and I don't know if there's a jockey out there who has been that lucky ... it's that life of stress that keeps, day after day on your body, that really takes a huge toll."

Living with that throbbing agony is another part of Collins' performance that constantly impressed Kwedar. He said, "It's one thing to show pain. It's another to hide pain, but it still be there simmering underneath the surface. It's a whole character arc." That's what motivates Silva's decisions in Jockey about how he will leave the sport: in an ambulance, a hearse, or of his own volition. For Kwedar, it comes down to one deciding factor: "Fear. That's the thing that really gives them nightmares. 'When I get on this horse, am I afraid?' Because that's when you get hurt bad, and that's when it's time to stop."