New Documentary The Orange Years: The Nickelodeon Story Tunes in to the Channel That Changed TV Courtesy of The Orange Years

What's your favorite Nickelodeon memory? Is it the raw surrealism of Rocko's Modern Life? The utter chaos of Double Dare? Wishing you could spend your summers at Camp Anawanna? Gak?

For Scott Barber and Adam Sweeney, it's that the pioneering cable channel for kids kept their friendship together at a low point in their lives. Sweeney remembers it clearly: They were school kids having a sleepover at Barber's place, and it was such fun that he called his mom to ask if they could do it again that night. "I got off the phone and had a really sad look on my face. Scott's like, 'What, it didn't work? That's OK, we can hang out next week.' I was like, yeah, I can't spend the night, but also my family's getting a divorce today. I'm moving. Immediately." Before social media, he noted, just moving 30 minutes from your old life was like moving to Siberia. "The way we stayed friends was that we would watch Nickelodeon together and call each other."

“All you have to do is watch The Mickey Mouse Club and Salute Your Shorts, and it’s night and day.” – Scott Barber

Fast-forward to 2016, and both men – still lifelong friends, even with Barber in Conroe and Sweeney in Austin – were working in the Texas film industry. Barber proposed doing a documentary together, and they both immediately went to their shared love of Nickelodeon. Sweeney said, "We really started doing the research, and that's when we found the story."

That story is contained in their new documentary, The Orange Years: The Nickelodeon Story, about how an educational kids' shows called Pinwheel, on an innovative interactive cable network in Ohio called QUBE, became a phenomenon that reshaped kids' television and pop culture. It focuses most especially on what Sweeney called "the Geraldine Laybourne years." Nickelodeon launched in 1979, and Laybourne joined the team as programming manager in 1980 as one of only five employees. By 1984, she was network president, and when she left in 1996 Nick was an $8 billion global TV titan.

But what really mattered with Laybourne was not revenue, and finding her impact was what convinced the pair that this was the film they wanted to make. "From the very beginning," Barber said, "we were very adamant about not just making a nostalgia piece." Instead, The Orange Years became about how Laybourne and her team threw out the rule book on kids' TV. "All you have to do is watch The Mickey Mouse Club and Salute Your Shorts, and it's night and day."

The documentary is filled with interviews, and even household names like Clarissa Explains It All star Melissa Joan Hart or behind-the-camera forces Hey Dude writers and future TV producers Lisa Melamed (Scoundrels, The 4400) and Graham Yost (Justified) signed up to talk about the channel that changed their lives. Barber said, "Everyone was excited to do this, which shows how powerful it was, not just in our lives, but in their careers as well."

Of course, the re­search process meant that Barber and Sweeney also got to watch, and hunt for, a huge amount of old shows. Sweeney said, "Scott would be messaging random people on YouTube," looking for the highest resolution source footage available. They even found a cache of those distinctive lurid orange VHS tapes on the shelves of Vulcan Video, including old episodes of The Adventures of Pete & Pete and Are You Afraid of the Dark? that had seemingly never been digitized. "That speaks to the power of physical media," said Sweeney.

In the process, they uncovered an incredible archive of forgotten moments, like the Nick News Special Edition when basketball legend Magic Johnson explained his HIV diagnosis to a group of kids, or when Saturday Night Live legend Chris Farley dropped by sketch show All That and did a scene with future SNL MVP Kenan Thompson. "That was a cool scene to put in," said Barber. Sweeney described that sequence as both a joy to find and a memorable part of filming. "If you want to talk about someone who basked in the messiness and the noise, that was Chris Farley. He's the master of the pratfall, he's the master of slapstick, and [you're] getting to see Kenan Thompson learning as he went. ... You could tell, when Kenan spoke to us, that he had so much reverence for Chris."

But what really came out of that research was uncovering the programming philosophy that Laybourne set out. She got into TV because she was concerned about what her kids were watching, and she always worked from one principle: Don't tell kids what they want, but listen to what they tell you they need. Because of that ethos, the network would take wild risks. Take their animation division: The network rejected buying in animated shows based on toys and instead developed in-house projects that reflected their programming aesthetic. End result? Their first three shows were Doug, Ren and Stimpy, and Rugrats, all game-changing in their own way and emulated to this day in shows like Steven Universe and Adventure Time. For the Nick creatives and executives, Barber said, "The goal was to make something awesome, as opposed to the goal ... to just sell toys."

As Sweeney explained, the programming did the same for kids' TV as Blumhouse has done for independent horror: "They allow their creators to take risks." (Moreover, much like Blumhouse, the programs were often diverse without making a huge deal of it.) He described those three cartoons as busting the tropes of animated TV at the time – of 22 minutes of explosions, reused footage, and a clumsy moral at the end, all built around commercial breaks. "Take a look at Doug," he said. "He has antagonists, he gets bullied a bit by Roger, but more or less he lives a pretty normal life, which is what a lot of kids can relate to."

For Barber, it was always about explaining the method to the madness and that none of this would have happened if it wasn't for Laybourne deciding to push the envelope at every turn. So while viewers may tune in for the slime (and that's never in short supply), it's also a tribute to the team that thought slime made for great TV. Barber said, "Most people, if you go, 'Hey, do you remember Hey Dude, do you remember Salute Your Shorts, do you remember Double Dare?' they go, 'Oh, yeah, I love those shows.' But if you say, 'What do you think about the work of Geraldine Laybourne?' they might go, 'I'm not familiar.' So that was our goal, to highlight the behind-the-scenes."

The Orange Years: The Nickelodeon Story splats into your life on Blu-ray, DVD, and VOD on Nov. 17. 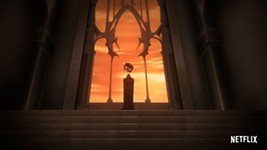