Any time two cult favorites combine, the hope is that they'll get their peanut butter in each other's chocolate. And so it was when two Austin brands – alternative fun merchants Toy Joy and online entertainment mini-empire Rooster Teeth – decided to collaborate on the first-ever Rooster Teeth pop-in store.

"It all started because the owners of Toy Joy are friends with some of the Rooster Teeth people," explained Emily McBride, RT's online store manager. Within the 512 area code, Toy Joy is an institution, with its quirky gifts and odd little trinkets. Rooster Teeth, on the other hand, is the biggest local success that most locals don't know about. Founded in 2003 as a video game review platform, it has expanded to create a panoply of online content, like Halo parody Red vs. Blue and gaming culture sub-site Achievement Hunter. Its international following is huge and dedicated, but its local profile is still low. McBride said, "It's very strange to work in a place like this, where you're telling your friends, 'People know us, people love us, how do you not know who we are?'"

McBride takes real pleasure in helping to bring RT's merchandise and fan base to a brick-and-mortar establishment. She said, "So many of our fans, they do everything online, they even do their shopping online, and we can tell them, there's this really cool place."

Toy Joy store manager Robby Pettinato said, "Ever since we launched, we've seen customers every day who are there specifically for Rooster Teeth stuff." They may come for the RvB playing cards, but Pettinato finds they stick around for Toy Joy's traditional games, imported kaiju figures, and skeletal lawn flamingos. "We have this weird metal version of 'Silent Night,' and it comes on, and they go, 'This is the coolest place in the world. The people who work here are just as nerdy as we are.'"

McBride's online store is stocked with limited editions of inside joke T-shirts that have loyal fans howling with laughter, but baffle outsiders. That's why, when supplying the pop-in store, she aims to create "a starter kit for Rooster Teeth ... The more broadly branded things, like T-shirts with the logo." The one exception may be the company's unexpected crossover success, RWBY, an American take on the Japanese tradition of high school kids fighting monsters. She said, "A lot of RWBY fans are anime fans, and anime fans are different in what they want. The Achievement Hunter fans want the T-shirts, the RWBY fans want the action figures."

For now, the Austin store is the only physical location for Rooster Teeth merchandise, but Pettinato sees potential for other small stores to benefit from its brand recognition. He said, "When we announced this on Twitter, I couldn't count the number of people who went, 'Oh, you should open one in London,' or 'You should open one up in Iowa.' Overall, it goes against the trend that online's the future." 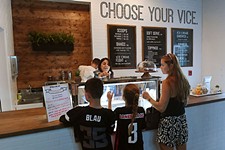 Back 2 Cool Reunion
We return to the Griffin School, 11 years later to see what the new school year will bring