Actor Brian O'Halloran on the enduring appeal of 'Clerks' 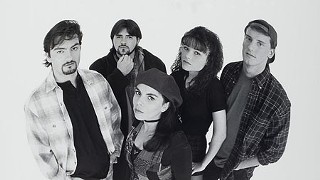 Brian O'Halloran (far left) with the cast of Clerks

"I'm not even supposed to be here today." With that single line in Clerks, Dante Hicks became a spokesman for a generation of beleaguered underachievers. Like Job's lamentations or Charlie Brown's trademark "Aaugh!," it was not just what actor Brian O'Halloran said, but how he said it: half working man's blues, half post-adolescent whine, summing up the existential angst of every minimum-wage slacker. On Aug. 4, Brian O'Halloran swaps the New York sweat-box summer for Austin's flammable conditions for a screening of the 1994 microbudget classic. (The event is part of Austin Books & Comics' Hot n' Nerdy Films series at the Blue Starlite Mini Urban Drive-In; see box, below, for more info.) O'Halloran credits the film's longevity in part to writer/director Kevin Smith's trademark nerdspeak dialogue and in part to Dante's role as everyman: "Everyone has either worked at a crappy service job like that, or you've been to a store where the service wasn't so great and you see these kids who could really care less about their job, that they literally are just putting in their time."

In the mid-1990s, cinemas were besieged by big-studio screwball takes on the post-grunge cultural limbo: Almost two decades on, it's the canon's lower-budget entries – Austin's Slacker and New Jersey's Clerks – that withstood the dual tests of time and cult appreciation (alas, unlike Clerks, Linklater's Austin day trip never got its own action figures).

Alternating between indie films and the New Jersey stage, O'Halloran remains a regular player in Smith's creative sandbox – nicknamed the View Askewniverse – and said he would gladly work with the director again on what is "allegedly his last film, his hockey film, Hit Somebody." (Why allegedly? Longtime Smith fans have heard similar claims from the director about retiring his Clerks characters since Chasing Amy in 1997.) It's not just that shooting with Smith is "like summer camp," says O'Halloran, or that one last film would poetically flip the "open" sign they turned together on the Quick Stop in 1994. "I'm a huge hockey fan, and so's he."

That raises the hope of seeing Dante bounce once more off his bosom frenemy Randal Graves, the transsexual-porn-loving guardian of the video store next door, played by Jeff Anderson as the bombastic ego to Dante's smothering, schlumpy superego. Sure, Clerks' vile street-corner dope slingers Jay and Silent Bob were easily blunted to become multiplex-friendly stars, but the pair that O'Halloran called Smith's "Good Kirk/Bad Kirk" retained a cult following. There have been comics and even a short-lived cartoon ("I thought that was going to be a tremendously huge hit that I would still be working on to this day, like the Simpsons people"), but 2006's Clerks II almost never happened. After the original's 10th anniversary DVD release, Smith approached O'Halloran and Anderson about reprising their roles in a sequel. O'Halloran leapt at the chance but recalled that Anderson was more cautious, saying: "Our fan base is very rabid, and they don't take to bullshit at all. They'll rip us a new one if we don't do this right."

Happily for all, the script won Anderson over. While most people saw Dante as a stand-in for Smith, he noted, "Randal is the clerk that Kevin wishes he could have been." Over time, with the success of Smith's SModcast, his speaking tours, and his Hollywood career, the director is arguably now less Dante, more Randal. O'Halloran said: "He's gotten to the point in his career that he can really just say what's on his mind, and people will just laugh at it. If you were hearing this from someone who was just trying to get you your pack of cigarettes, you [say]: 'Oh, all right, that's very funny. Now can I have my cigarettes?'"

Well, the title pretty much says it all: "Hot" and "nerdy" form the criteria for films included in a new series co-sponsored by Austin Books & Comics and the Blue Starlite Mini Urban Drive-In (2326 E. Cesar Chavez). The series kicks off with tonight's screening of 1986 cartoon Transformers: The Movie, with an intro by Austin artist Tim Doyle. Brian O'Halloran will attend the screening of Clerks on Thursday, Aug. 4; filmmaker Ernie Cline will introduce his 2008 debut, Fanboys, on Thursday, Aug. 18; and the series concludes with the original loincloth-Arnie version of Conan the Barbarian on Thursday, Aug. 25. Additionally, there will be a Tim Doyle/Nakatomi Inc poster designed for each of the screenings, plus prizes, trivia, merch, and more. Advance purchase of tickets is recommended; you can do just that at www.bluestarlitedrivein.com. – K.J.