Recognizing the stars but also the spirits

It's a story that Texas Monthly Editor and Texas Film Hall of Fame Awards co-founder Evan Smith hasÊtold more than once, but under the circumstances, it's worth revisiting. A few years ago, he found himself standing backstage at the ceremony with former Gov. Ann Richards, while a film clip of Terrence Malick's Days of Heaven unspooled onto a giant screen above the stage. "It was a long clip, and we were just transfixed," Smith recalls. "The world just fell away. And, after about 40 seconds, she turned and looked at me and said, 'I love the movies!' And it was almost childlike in the way she said it. She just seemed like someone who wasn't this famous person emceeing some big-time event – she was the No. 1 movie fan in the entire world at that moment, and she loved it."Ê

Ann Richards loved Texas films and Texas filmmakers, and they loved her back – which is why this year's Austin Film Society Texas Film Hall of Fame Awards ceremony is being billed as "A Salute to Ann Richards."

"She emceed the Texas Film Hall of Fame Awards four times – from 2002-2005 – and kind of held the whole evening together with her wit," says AFS Executive Director Rebecca Campbell. "She just sort of embodied the spirit of the event. That's why we're paying tribute to her this year."

"The thing about Rick Linklater is – no Rick Linklater, no Austin film community," Smith says. "Not only does he do extraordinary work as a filmmaker himself, but he's been an inspiration to other filmmakers.

"Betty Buckley is an interesting choice this year," Smith continues. "She's a triple threat, not only an accomplished actress on the big screen – Tender Mercies and other films – she's also a multiple Tony Award nominee for her extraordinary and extensive stage work, and she's an accomplished recording artist. "What do you say about Bill Paxton? He has an incredible Hollywood career, he does independent films, he does big budget films ... he's a great actor, somebody who has produced and directed, who has real ideas about what film entertainment ought to be."

Powerhouse trio the Dixie Chicks will be saluted with the 2007 AMD Live! Soundtrack Award. "They know who they are and what they are, and that's a terrific Texas value," Smith says. "We're recognizing them in the realm of film because of the documentary that was made about them, Shut Up & Sing, a terrific example of how music and film are forever linked."

This year's induction ceremonies will also inaugurate a new honor, the Ann Richards Award, which, according to Smith, will be given out each year to "somebody in the Texas film world who has broken barriers and who has created a place at the table for somebody that didn't have a place at the table before." 2007's recipient will be producer Elizabeth Avellán. "Elizabeth Avellán is one of the most consequential Hispanic filmmakers in the entire business," Smith says, "and has created opportunities for all kinds of people. In her hard work, her determination, her independence, and her frontier spirit, she personifies the values that were embodied by Ann Richards, and if Ann Richards were here, she would be saluting Elizabeth as the first choice, because Elizabeth represents the very best of everything Ann believed in."

One of the evening's most buzz-worthy events promises to be the appearance of legendary screen icon and sex kitten Ann-Margret, on hand to accept the newly christened Tiffany & Co. Star of Texas Award honoring classic films shot in the Lone Star State. This year's selected film is 1962's State Fair, shot on Dallas' Fair Park, starring Margret, Pat Boone, and Bobby Darin.

For all the glamour and star power, the spirit of Ann Richards will no doubt permeate the proceedings. "She never let an opportunity go by to be a mentor or an inspirational leader," Campbell says. "She once said to me, 'Don't ever get up onstage and waste that minute. You tell people exactly what you need them to do.' ... She's going to be missed. I think it's going to be a really exciting – and emotional – night." 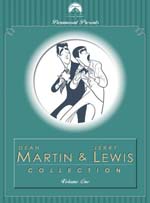 The Martin & Lewis Collection: Volume One
"We don't need writers"