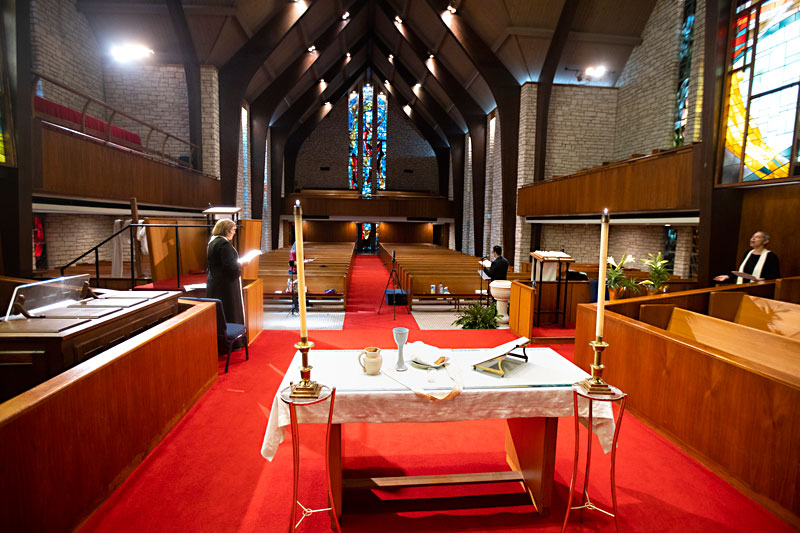 Service to an empty sanctuary: The Rev. Katheryn Barlow-Williams (l), senior pastor at Downtown's Central Presbyterian Church, and Designated Associate Pastor Carolina Treviño (far right) held the church's Easter Sunday service, April 12, via Facebook Live due to Austin's "Stay Home, Work Safe" orders during the coronavirus pandemic. Earlier this week, city and county officials extended the orders – which were set to expire at midnight Mon., April 13 – through May 8 with an added requirement that residents must wear fabric face coverings when conducting essential work or activities in public. (Photo by Jana Birchum)

COVID-19 in Shelters: The Salvation Army closed their Downtown shelter last weekend after a person staying there tested positive for COVID-19. The 187 people staying at the shelter were moved to a city-leased isolation hotel. A client staying at the Austin Resource Center for the Homeless also tested positive on Mon., April 13; the client and the seven people who shared a room with them were also moved to a hotel for isolation.

Census Delayed: The U.S. Census Bureau canceled field operations until at least June 1, due to concerns over the COVID-19 pandemic, and announced that the process won't be complete until at least Oct. 31. Commerce Secretary Wilbur Ross also requested Congress move the delivery date of the count to the president from Dec. 31 to April 30, 2021. Delivery to the states would be pushed from March 31, 2021, to July 31, 2021 – after the conclusion of the next regular session of the Texas Legislature. That's a big deal, because redistricting was expected to be a major battle during the next Lege session, and now it looks like Gov. Greg Abbott will have to call lawmakers back for a special session next summer to draw new districts. (See more on the census here.)

The Park in Parking: Austin's Parks and Recreation Department announced Mon., April 13, parking access for Downtown parks, district parks, and neighborhood parks will be reduced to discourage crowding. Addition­ally, the Ann and Roy Butler Hike-and-Bike Trail at Lady Bird Lake will convert to a "one-way" trail to increase physical distancing.

Paxton Be Paxton-ing: The Texas Supreme Court has granted a stay on a state district judge's temporary restraining order that prohibited Gov. Greg Abbott's executive order banning the release of anyone accused of violent crimes on personal bonds. Texas Attorney General Ken Paxton, whose office appealed the state district judge's decision, is one of several state officials fighting efforts to reduce jail populations as the coronavirus spreads in Texas' jails.

No Help Needed: Travis County Commissioners voted to institute a hiring freeze on most county employees, amounting to about 51 new hires a month, that would save around $4.7 million by the end of the fiscal year. Some positions will be exempt; Commissioners are expected to vote on which can still be hired at the April 28 meeting.

Red (Empty) Asphalt: On April 15, Austin Police Department announced Austin's 26th fatal traffic crash of 2020, resulting in 28 fatalities so far. At this time last year, there were 18 traffic fatalities. In other traffic-related news, Austin's traffic has been reduced by nearly half during the COVID-19 pandemic, according to data from the Texas Dept. of Transportation. 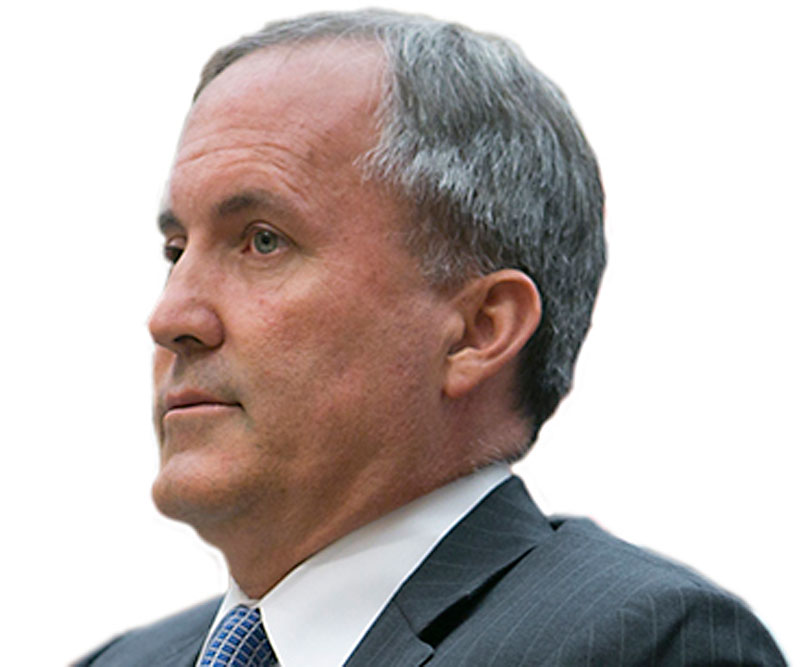 “Fear of contracting COVID-19 does not amount to a sickness or physical condition as required.”