America remains a refuge for those escaping peril in their home countries. On Monday, Feb. 6, volunteers turned out at Austin-Bergstrom International Airport to welcome a family of migrants. They were the first Syrians to resettle in Texas since the federal courts issued a stay on President Donald Trump's executive order banning immigration from seven majority-Muslim countries. Yet as the legal battle continues, charities and businesses struggle to make sense of who is and isn't allowed to enter the country.

Awaiting Tuesday's hearing before the 9th Circuit Court of Appeals, Refugee Services of Texas spokesman Chris Kelley said Trump's order had caused "a lot of confusion." By last Friday, Feb. 3, when it reached a Washington federal judge, the order had been rewritten and reinterpreted to clarify whether or not green card holders and U.S. passport holders with dual citizenship would be affected. Then, Sec­retary of Defense James Mattis had the order amended to exempt special immigration visa holders, which Kelley explained were issued "primarily to advisers and translators who assisted U.S. forces in Iraq and Afghan­istan." They're an important part of RST's business, accounting for around 25% of all refugees to the state, and placed here because of the large number of military personnel with whom they may have served.

The ban also caused disturbance among businesses, especially engineering and IT companies, that rely on international employees. However, White House Chief Strategist Steve Bannon and Attorney Gen­er­al nominee Jeff Sessions have both railed against the H1B visas under which they work. Prior to Tuesday's hearing, 96 companies, including Dropbox, Facebook, and Pay­Pal, all three of whom have Austin offices, filed an amicus brief against the order, arguing that it was discriminatory and harmed the competitiveness of U.S. firms.

In line with the brief, Greater Austin Chamber of Commerce Senior Vice Pres­i­dent of Policy Drew Scheberle countered that the chamber actually wants to broaden H1Bs. Noting that Austin is a "global talent destination," with 20% of its population born in a foreign country, he said, "We oppose blanket exclusion of anyone based upon religion." He added: "We hope the president and elected leaders will explore ways to ensure Austin-based employers have access to the best talent to grow jobs here in this region and this country."

As of Jan. 31 a total of 2,143 refugees were scheduled to be admitted into the country. That number dropped to 872. 1,271 of that original figure came from the seven nations on Trump’s list.

Yet the most immediate impact may well have been on refugees. The original text of the order imposed a 90-day block on citizens of Iran, Iraq, Libya, Somalia, Sudan, Syria, and Yemen. However, it also suspended the U.S. Refugee Admissions Pro­gram for 120 days; that blocked all refugees, no matter the nationality, from entering the U.S., and that extended to an indefinite ban on refugees fleeing the Syrian conflict. According to Refugee Services of Texas, as of Jan. 31 a total of 2,143 refugees were scheduled for admittance into the country. That number was cut to 872, with 55 arriving in Texas. So when the order came down, it left 1,271 people in limbo – people who had already given up their lives in whichever country they were residing. Kelley said, "They have sold all their property, they have quit their jobs, and they are in these three-day schedules of packing."

SARA Organization, which provides assistance to Syrian refugees moving to Austin, issued a statement on the order: "For the existing refugee population, it created confusion, misery, worries about their situation, and doubts about the U.S. fulfillment of obligations." As for refugees in transit, either coming to the U.S. for the first time or merely traveling internationally, the order was "a disaster. ... Some had to go back in danger and into much more miserable conditions than they had before the start of their journey."

Kelley said RST has no issue with vetting refugees to ensure public safety, and said, "If there is more that can be done which isn't an ideological religious test, then certainly we want a safe border." But he noted that refugees coming to America already go through the most rigorous vetting of any nation. The U.S. will only consider those classified as vulnerable – families, or those facing oppression because of issues such as race or sexuality. Priority consideration is given to anyone with a family support system already in the country, or otherwise classified as a likely candidate for a successful resettlement. Once they pass those hurdles, it's an 18-24 month process, with multiple interviews, biometrics, blood samples, and an examination of their social media history, if they have one. Kelley said, "If even a question is raised about somebody, they are removed." The U.S. only accepts 0.5% of all refugees globally, and is currently capped to accept only 50,000 refugees this year.

Yet while aid agencies waited for the appeals court ruling and a potential Supreme Court hearing, the presumption is that they will keep settling and assisting those fleeing conflict. Both SARA and RST reported an outpouring of support and donations since the order, with Kelley noting that assistance came from across the political and religious spectrum. With Texas ready to take its share of the roughly 2,000 refugees arriving in the U.S. before Feb. 17, he said, "It's full speed ahead." 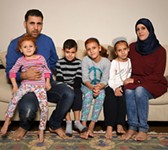 Thanksgiving as a Refugee in America
Give me your poor, your tired, your huddled masses yearning to breathe free