Perry stands behind his veto 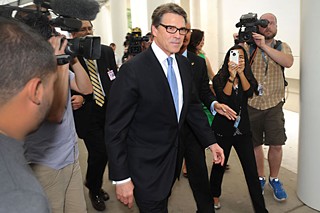 Texas political operatives and reporters were packing up for a nice, quiet weekend, when a Travis County grand jury threw their plans into disarray. At close of business on Aug. 15, the jury issued two felony indictments against Gov. Rick Perry, essentially accusing him of trying to blackmail Travis County District Attorney Rosemary Lehm­berg into resigning.

The facts of the case seem incontestable. In the closing hours of the 2013 legislative session, Perry demanded that Lehmberg resign. She had infamously been arrested for DWI, and a video of her under arrest, flailing and abusive, made headlines. Lehmberg, who pled guilty and later served a 45-day sentence, refused to quit. Perry threatened to use his line item veto to slash state funding for her office's Public Integ­rity Unit. Lehmberg still refused to quit. Perry followed through on his threat, releasing a veto statement that "I cannot in good conscience support continued state funding for an office with statewide jurisdiction at a time when the person charged with ultimate responsibility of that unit has lost the public's confidence."

On June 14, 2013, the day of Perry's veto, Texans for Public Justice filed a criminal complaint. At the time, TPJ director Craig McDonald said, "Perry has no legal authority to remove the Travis County District Attorney from her job. Threatening to take an official action against her office unless she voluntarily resigns is likely illegal."

The grand jury agreed, stating in the indictment that Perry "intentionally or knowingly misused government property" contrary to his oath of office. Now he faces two criminal counts. The first, abuse of official capacity, is a first degree felony that carries a sentence of five to 99 years. The second, coercion of a public official, is a third degree felony and carries a maximum sentence of 10 years. There will be no arrest warrant. Instead, Perry voluntarily surrendered late Tuesday afternoon and alerted the media beforehand; he was released within minutes. Perry's lawyer filed a waiver of arraignment and a plea of not guilty to both counts during their visit to the courthouse.

The indictments hang on a series of meetings and exchanges that took place around the time of Perry's veto. His office met with county officials and made a series of offers about details of removing and replacing Lehmberg, and the potential of reinstating the vetoed funding. It became public knowledge that Perry would even consider relocating her elsewhere in the D.A.'s office – peculiar, considering he argued that she had no public confidence.

After the indictments, Perry was typically pugnacious, calling multiple press conferences and booking appearances on Fox News Sunday and The Sean Hannity Show (at the same time, Perry's legal team said they would not fight the case in the press, but then held a press conference Mon­day to lambaste Lehmberg). Perry called the charges a "farce," adding, "I wholeheartedly and unequivocally stand behind my veto, and will continue to defend this lawful action of my executive authority as governor."

But Democrats say this is nothing to do with Lehmberg, but about the agency whose funding he cut. The PIU is charged with investigating criminal complaints against elected officials, including lawmakers and statewide officeholders. It is located within the Travis County D.A.'s office, rather than the Texas Attorney General's office, just in case the state's top lawyer ends up under investigation. Its higher profile prosecutions have included disgraced Republican Tom DeLay, and convicted perjurer and former Democratic state Rep. Kino Flores. The office is also currently investigating the actions of UT System Regent Wallace Hall, attorney general hopeful Sen. Ken Paxton, R-McKinney, and the Cancer Pre­vention and Research Institute of Texas. When Perry slashed its funding, it had 425 pending cases, so Travis County Com­mis­sioners approved $1.8 million in local funds as limited bridging funds – just a fraction of the office's already meager budget.

Conservatives have spent years unsuccessfully trying to undercut the PIU. In the 2013 session alone, Rep. Phil King, R-Weath­erford, pushed repeatedly to move the PIU into the attorney general's office (in previous years, Rep. Wayne Christian, R-Center, had made the same proposal, while Sen. Dan Patrick, R-Hous­ton, just wanted to defund it.) So while Republicans may be rallying around Perry now, his veto came after lawmakers of both parties not only rejected those attempts to undermine the PIU's independence and authority, but approved its $7.5 million, two-year budget allocation.

Progress Texas Executive Director Ed Espi­noza noted that, when two other D.A.s were convicted of drunk driving – Swisher County D.A. Terry McEachern in 2003 and Kaufman County D.A. Rick Harrison in 2009 – Perry remained silent. He said, "Rick Perry has been looking the other way on Republican drunk driving charges for years – let's call this what it is, a cover up of an investigation into the cancer research fund."

Predictably, Perry's supporters have portrayed this as a Travis County Democratic witch hunt, following the governor's lead when he called it "partisan political theatrics to rip away at the very fabric of our state's constitution." Perry's attorney David L. Botsford smeared the charges as "political abuse of the court system," a sentiment echoed by Louisiana Gov. Bobby Jindal, who called the action "a blatant misuse of the judicial system by liberal activists."

However, those talking points do not stand up to scrutiny. Lehmberg recused herself from the case, so last August Judge Robert C. Richardson appointed Michael McCrum as special prosecutor in her stead. Both men are based out of San Antonio, and until this indictment, had credentials that passed GOP purity test muster: Richardson recently won the Repub­lic­an nomination for the Criminal Court of Appeals, while in 2010 McCrum – a former Dallas police officer and federal prosecutor – was backed by both Sens. John Cornyn and Kay Bailey Hutchison as nominee for U.S. Attorney for the Western District, until he decided to stick with his career in private practice specializing in white collar crime. McCrum fired back against the charges of partisanship, stating, "when it gets down to it, the law is the law."