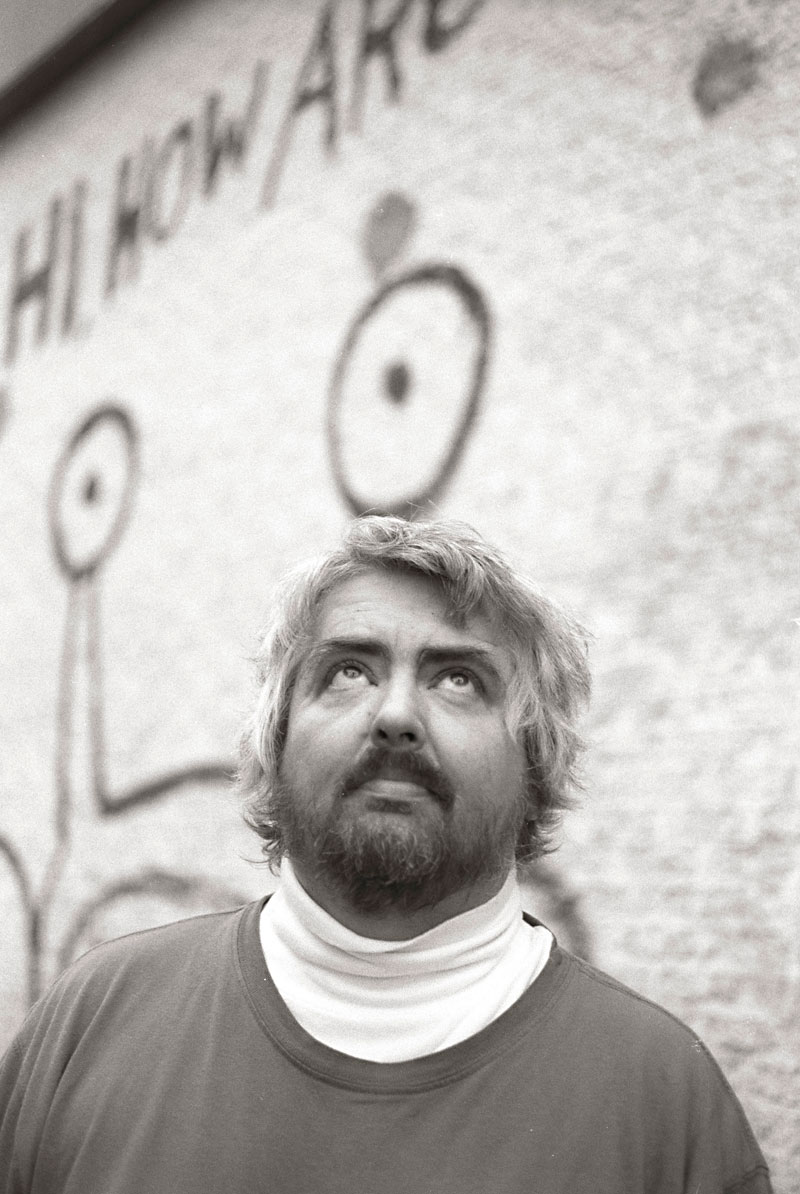 Daniel Johnston, the influential singer-songwriter and visual artist who painted Austin's famous "Hi, How Are You" frog mural on the Drag, died at home Tuesday night, Sept. 10, following a presumed heart attack at age 58. The news was confirmed on Wednesday by his former manager Jeff Tartakov.

Johnston's physical health worsened significantly in recent times. Last year, his sister Margy Johnston told the Chronicle that Daniel had recently endured a rough go that included falling, hospitalization, and frequent adjustments to his medication. In January, while famous fans like the Flaming Lips and Bob Mould covered his songs at ACL Live at the Moody Theater for the second annual Hi, How Are You Day, Daniel landed in the hospital again.

Johnston, who was raised in West Virginia and moved to Austin in the early Eighties, counts 17 full-length albums of original music, including an incredible trio of home-recorded tapes from 1983: More Songs of Pain, Yip/Jump Music, and Hi, How Are You. He has at least three more LPs worth of original music that are yet to be released.

"I've been working on a new album with [Austin's] Brian Beattie for years, and I hope it comes out real soon," Johnston told the Chronicle in 2018.

His songs have been covered by Tom Waits and Yo La Tengo and championed by Kurt Cobain. His ongoing trials with schizophrenia and manic depression were explored in the 2005 documentary The Devil and Daniel Johnston.

Beattie, close friends with the singer since the early Eighties, and later his producer, spoke with the Chronicle yesterday about what made Johnston so inimitable. 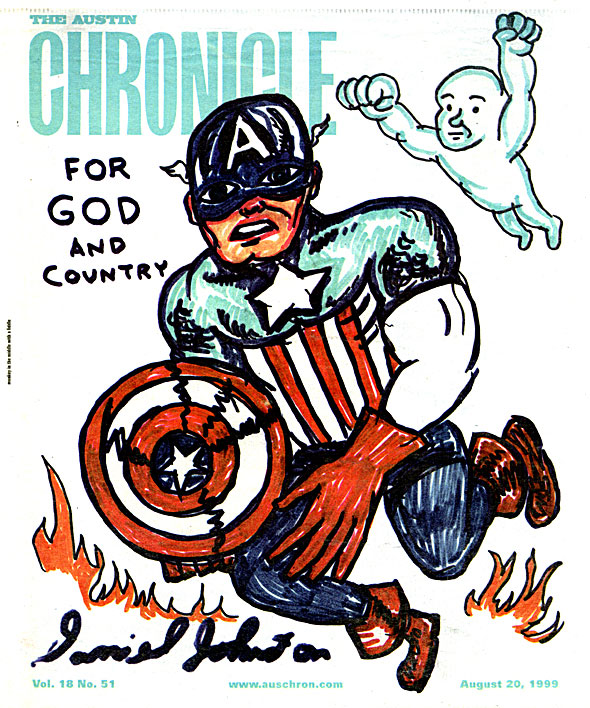 "When we heard those tapes, Hi, How Are You and all those, there wasn't any other music from my age group where it was so absolutely personal," he attested. "The things he was singing about, it was almost voyeuristic to hear it. So, he really cracked open the kind of emotions you don't understand yet. He was all about those emotions. He understood not understanding them.

"To me, there was something about the way he was only being himself and, at the same time, he was completely formed by the larger world, yet he was so uniquely private in that weird way that he was."

"He opened it up and read to us 'schizophrenia' and 'manic depressive' and he said, 'If you're gonna deal with me, you're gonna need to understand these kind of symptoms because that's what I'm like,'" Beattie recalls. "I thought it was so careful of him to do that."

Even when he was working at the McDonald's on the Drag, Johnston had ambitions of being a rock star. While he ultimately never attained the rock star lifestyle – or the romantic love that he sought in his songs – he did become a musical legend.

“He’s legendary, but he was first a legend in his own mind, then he became a real legend,” posits Brian Beattie.

"He's legendary, but he was first a legend in his own mind, then he became a real legend," posits Beattie. "That was the only time I saw that happen where someone was like, 'I'm gonna get famous' and he just kind of made himself. He was the least likely person on Earth to get popular and he did. I'm in awe of the power of the songwriting.

"He was the first person I met who just wielded songwriting like that."

In recent years, at his friend's urging, Beattie finalized a wonderful new Daniel Johnston album titled If. Its producer campaigned for it to be released, but he hasn't gotten approval from Johnston's management. Beattie says there are at least two more albums of previously unheard DJ material of the same quality among the recordings they did together, many of which were tracked at Johnston's family home in Waller.

In the fall of 2017, Johnston embarked on what was billed as his "final tour," although he didn't think it would be at the time. The five-date North America run featured the songsmith performing with artists and acts he had influenced, including Wilco leader Jeff Tweedy, Built to Spill, the Preservation All-Stars, the Districts, and Modern Baseball. Early last year, Johnston appeared at the Mohawk in Austin for the inaugural Hi, How Are You Day concert, which he closed with a curtain-call rendition of his most iconic song: "True Love Will Find You in the End." 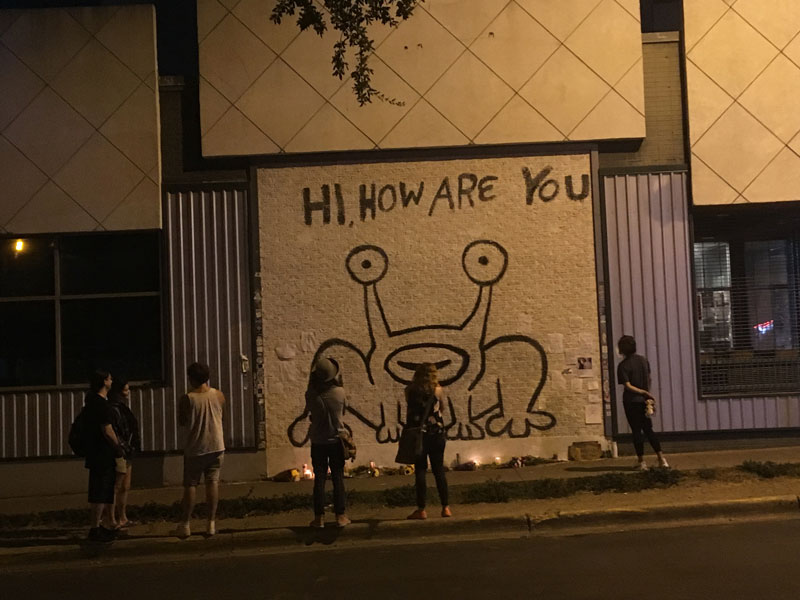 "People call it Jeremiah, like Jeremiah from the Bible, but it's not really the frog's name," clarified Daniel Johnston about the happy, tentacle-eyed amphibian famous from both his 1983 cassette Hi, How Are You: The Unfinished Album and the mural at Guadalupe & 21st Street. "I didn't have a name like that for the frog. I always called it the Innocent Frog.

"He's full of innocence the way I was back then. I remember they paid me $70 to do it! And I was happy."

Today, most know the iconic image from its overhanging phrase: "Hi, how are you."

"When I was growing up, after church, everybody shook hands and would say, 'Hi. How are you?'" recounts Johnston. "I always heard it, even at the funeral home when there was some dead person who died of old age. The undertaker said to me, and I was just a little boy, 'Hi. How are you?' That's how that started.

"Then, when I worked at AstroWorld, I found a container in the garbage that held rubber frogs," he elaborates. "It had a picture of a frog and it said on it, 'Hi. How are you?' So I decided to name my album Hi, How Are You."