No doubt tenants relish the sweet digs: a 25,000-square-foot compound on East MLK, honeycombed with grassy courtyards. Mosaic hasn't hoisted a sign, or hosted a grand opening, but it's filling up with occupants excited about its affordability and community-sustaining model wherein musicians can earn membership through volunteering, then reap discounted services.

Recording studios represent a strong element of Mosaic's early groundswell. Stuart Sullivan, the veteran Austin engineer who's worked closely with the Butthole Surfers, James Cotton, and Sublime, is already operating his Wire Recording Studio inside Mosaic. The collective provided a soft landing after he lost his Downtown facility to skyrocketing rent.

One of his longtime colleagues, Charles Godfrey, an in-house engineer for renowned West Texas recording facility Sonic Ranch, moved to Austin last December and caught a glimpse of Mosaic while helping Sullivan move. He was so impressed he's decided to open a studio there too. Godfrey, who's engineered albums by acts like Cannibal Corpse and Yeah Yeah Yeahs as well as Austin bands including Explosions in the Sky and the Black Angels, represents an impressive addition to Austin's recording landscape.

Opening soon at Mosaic, his mixing studio – also featuring recording capabilities – will work both separately and potentially in conjunction with projects at Sonic Ranch, where he'll continue to work. The appeal of Mosaic: collaboration.

"Being part of that community is going to be a great way for me to jump into the Austin scene, in a professional sense, outside of Sonic Ranch," he says.

Amongst tenants, community partners, and operators, there's suddenly palpable excitement brewing around this project that seemed somewhat subterranean in recent months. There's also tight-lipped anticipation about some game-changing additions that could be announced as soon as next month.

"If Dan Redman accomplishes all the things he's trying to do, they're gonna build a statue for that man – pointing towards the future," grins O'Donnell.

Visit our online gallery of Mosaic at austinchronicle.com/photos.

The title track of Adam Torres' new Fat Possum EP I Came to Sing the Song meditates on the existential meaning of being a songwriter, his voice quavering like a wind instrument over music so delicately atmospheric it's a wonder it can brace such poetic density.

"It's about finding one's purpose," explains the local songwriter. "The song talks about different people and animals, and how it's natural to have this invitation to profess their lives to others and the world." Twice fluttering into the lyrics is a "bluebird," his family name in honor of his step-grandfather, a Cochiti Pueblo chief of the Santo Domingo tribe. Torres' bloodline turns up both Apache and mestizo. Last year's four-star sophomore LP Pearls to Swine shared that flesh and bone with NPR listeners via All Songs Considered host Bob Boilen and transformed him from opening act to headliner.

Little in the previous decade indicated a promising music career. Shortly after the release of 2006 bow Nostra Nova, he "departed from the idea of being a touring musician," finished at Ohio University, lived in Ecuador, attended grad school here at UT, and worked water quality studies in the Rio Grande. Throughout that time, Torres hummed hundreds of songs, but only when Pittsburgh indie Misra Records reissued his debut long-player on vinyl in 2015 did the music business beckon again.

Torres spent most of last year on the road with his band of Austin eclectics: percussionist Thor Harris (ex-Swans), Aisha Burns (Balmorhea), and multi-instrumentalist Dailey Toliver (Molly Burch). The same group cut the session at Erik Wofford's Cacophony Recorders that spawned both Pearls to Swine and this week's follow-up. At the time, Torres identified those four tracks' common thread and parceled them out for the EP.

"Pearls to Swine was an outward artist statement," he explains. "I was trying to describe a fictitious setting of the world we inhabit and the idea that people, society, and even nature was devolving to this wasteland. I Came to Sing the Song looks inward. I wrote them with writing in mind. There's some kind of composition element to everything the characters are doing."

Catch Torres Saturday at the Cactus Cafe, a venue where people come to sing the song.

Teflon Don: Two days after resigning in frustration over government bureaucracy, Don Pitts agreed to return to the Music & Entertainment Division as a consultant through April 29. The city's sentiment was clear: Without Pitts, they'd be up shit creek during South by Southwest. A recently revealed City Auditor's investigation found that he had failed to report wrongdoing after former coordinator Ashley Buchanan filed a fraudulent invoice for $2,500 attempting to be reimbursed for a trip she took with a vendor that was supposed to come at no cost to the city. 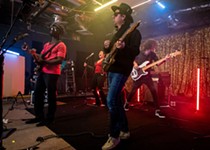