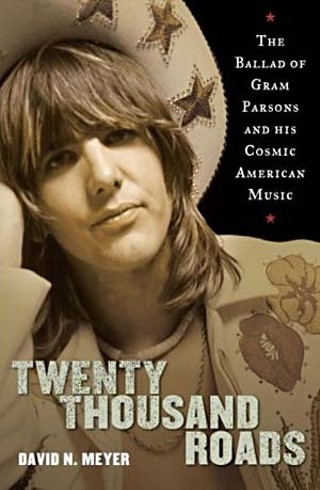 Twenty Thousand Roads: The Ballad of Gram Parsons and His Cosmic American Music


The paradoxical elements of Gram Parsons' genius are well-ingrained in music lore: his charisma and intense introspection, his ambition and restless self-destruction, his beauty and pain. In new biography Twenty Thousand Roads, author David N. Meyer maintains a fascination and frustration with those competing impulses in the country-rock progenitor yet accounts for the man above the myth. Meyer's content to leave legendary episodes like Parsons in Villa Nellcôte in France with the Rolling Stones to the annals of others' extravagant rock histories, focusing instead on the fraying tension the scene precipitated between the songwriter and future wife Gretchen Burrell. The biography provides no grand revelations, but Meyer's exhaustive research, exquisite narrative prose, and singular focus on Parsons – rather than the constant drama that surrounded him – are refreshing and continually insightful. Meyer's greatest contribution lies in the candid and thorough examination of Parsons' upbringing and sordid, Tennessee Williams-esque family history of addiction, suicide, and squandered wealth. In an uncharacteristically open moment in 1965, Parsons writes to his younger sister, Avis, "The best thing we can do is learn from the past and live our lives the right way, so in time, when we can do something to change things, we will be real people." Meyer ultimately achieves what even Parsons could not: He discovers the person behind the myth enshrouded in Nudie suits, L.A. glamour, and drug excess. What's left is the true legacy of Parsons' contradictions, an immensely gifted artist whose sincerity, lost in a surreal life, emerged instead in song.