A world of flavor – all on one street


Iliana de la Vega and Ernesto Torrealba demonstrate a genuine confidence in their food, and seem to have impeccable timing. The talented husband and wife team rode the wave of interest in the authentic cuisines of Mexico with an internationally famous restaurant in the city of Oaxaca from 1997 until 2006. They sold that and left Mexico when well-publicized political unrest and drug violence undermined the tourist trade in that country. Not long after the couple arrived in Texas, the Center for Foods of the Americas in San Antonio hired chef de la Vega as an instructor specializing in Latin cuisines. That program eventually became the third American campus of the Culinary Institute of America, and Iliana de la Vega continues to be a highly respected member of the founding faculty there. In 2008, they wisely used Austin's emerging food truck trend to introduce themselves and their cuisine to the city, opening the El Naranjo trailer in the up-and-coming Rainey Street District. Soon, El Naranjo had a fiercely loyal clientele and was the only trailer included in a Texas Monthly list of the "50 Best Mexican Restaurants in Texas." The exposure garnered by the trailer made it possible for Iliana and Ernesto to realize another important goal: creating the second generation of their El Naranjo restaurant. "It was expensive advertising," Iliana says ruefully, "but working in the trailer got us to where we are now." Where they are now is a chic and cozy restaurant in a remodeled cottage on Rainey, the opening impeccably (and serendipitously) timed to coincide with our story on the neighborhood.

The late 19th century cottage has been tastefully transformed into a casually modern eatery without making a jarring change to the atmosphere of the surrounding neighborhood. The interiors are comfortably bathed in natural light, with soaring ceilings, clean lines, and light wood accents. The decor is simple and understated. Guests can relax at the small bar, in cozy dining rooms, or on the well-shaded, private patio in back. Chef de la Vega says the interiors will be complete once they add some photographic art and a sound system. She spends her weekdays teaching in San Antonio, arriving back in Austin just in time for dinner service. Both Iliana and Ernesto work in the kitchen, and fans of the trailer will undoubtedly recognize certain components – such as sauces, moles, and some side dishes. However, the restaurant's menu represents an entirely different level of culinary sophistication for Mexican food in Austin.

Our group of 12 was seated at tables formed into a square in a small dining room off the main hall. We expected the media tasting party to consist of drinks and passed appetizers, but it turned out to be an impressive 13-course feast showcasing a variety of dishes that will appear at different times on the rotating menu. The specialty cocktail of the evening was the house version of a pisco sour, made with an eye-catching magenta swirl of hibiscus syrup – very tempting. As the remarkable courses progressed through the evening, the food writers around the table challenged each other for ways in which to describe the dining experience.

Each carefully handcrafted course was distinctly different from the others, offering contrasts in flavor, texture, and temperature that somehow achieved a harmonious balance on the palate. Delicate squash blossoms were filled with housemade ricotta cheese, followed by a light, creamy gazpacho that was a stroll through the summer garden in a shot glass. The enchilada course cleverly offered strips of shaved jicama bathed in a sauce of ancho and guajillo chiles, while crunchy chayote slices were simply dressed in an olive oil and cane sugar vinaigrette with Mexican oregano and a dusting of cotija cheese. A preview of meat courses included pork, shrimp, salmon, chicken, and duck – complemented by elegant sauces, pipians, and moles, the quality and complexity of which you're not likely to see anywhere else in Austin. Desserts were equally stellar: the house version of Tiramisu made with café de olla, a velvety flan de rompope, and squares of uniquely textured mousse de mamey.

The tasting dinner at El Naranjo once again transformed my thinking about the cuisines of Mexico and brought to mind my first revelatory meal at Fonda San Miguel in 1975. After an early life firmly rooted in Tex-Mex appreciation, that long-ago meal opened up an entirely new world of culinary exploration. It changed my life, and ultimately, my career. Nearly 40 years later, Iliana de la Vega has once again raised my culinary consciousness with regard to Mexican food, and I plan an in-depth study of her work. – Virginia Wood 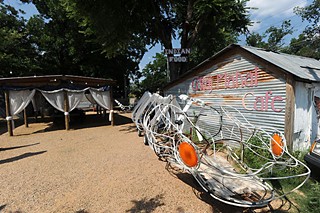 
We recently had the opportunity to drive the highway from Agra to New Delhi, and dotted along the way were several exotic looking outdoor eateries. The trendiest amongst foodies are dhabas, which are often Punjabi huts serving spicy fare to truck drivers. But there are also nicer places to serve families and business types, in some combination of kitchen, grassy area, and a fairly luxurious tent or other structure for the comfort of the customers. When we first saw G'Raj Mahal Cafe, it almost looked like we were back in India. That was, until we got in and saw the only-in-Austin 20-foot-long psychedelic bicycle.

We ordered everything medium spicy. Indeed, our server told us that the spiciness varied by who was leading the kitchen each night – so it's a good idea to ask. My favorite dish was the dahl makhani ($9); the most perfectly textured black lentils in the creamiest possible sauce with just enough curry spiciness to grab your attention. We all loved the korma ($14) with large chunks of paneer cheese. As with other dishes, you pick your own meat, and here, we chose fork-tender goat. The Malabar ($10) with lamb married its coconut and caramelized onion flavors, and the big chunks of tender lamb melted in our mouths. Even the garlic naan ($2) was exceptional. We weren't alone in loving the place. It was jammed to the gills from the moment we arrived at 7:30 until we left at 11pm. The fact that they happily allow you to BYOB is icing on the cake. – Wes Marshall


During our pre-opening tour of the new Whole Foods in Bee Cave, my wife was chatting with Austin media and Community Rela­tions Manager Rebecca Scofield and mentioned we had just come from lunch at the Cazamance Cafe. Rebecca's face lit up; turns out Iba Thiam, the dreadlocked Senegalese owner of Cazamance, is quite popular around Whole Foods. He worked there for a while and created a couple of their most popular gelato recipes. He also became quite a proponent of local shopping and clean, fresh ingredients.

I first met Iba Thiam when we stopped at Bar 96 and discovered Cazamance around back. I'm a sucker for fusion food anyway, but the Boy Dakar lamb burger ($9) just sounded too good to pass up. Wrapped in a wheat tortilla, the ground lamb was fragrant with exotic spices and slathered with Iba's homemade tomato relish and cucumbers. For folks looking for something a bit less exotic, the smoked melt brisket wrap ($9) is similarly prepared, but tastes like what you might find at a very high quality barbecue stand. On a return visit, three of us wolfed down the seared yassa chicken quesadilla ($7) with housemade pepper jack cheese and a garlic paprika cream sauce. When we could talk again, we decided it was about the best quesadilla we'd had in Austin. Everything we tried was carefully prepared, skillfully spiced, and cooked to perfection. This place is very highly recommended and well worth a trip. – Wes Marshall