California wines in the Alsace fashion 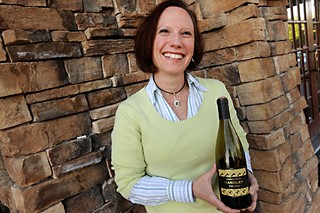 Handley Cellars has always focused on making food-friendly wines in an Old World style – never over-oaked nor excessively sweet. Founder Milla Handley started her business 30 years ago, when there weren't many women CEOs at California wineries. After working at Chateau St Jean and Edmeades, she made the gutsy decision to start her winery in the largely unplanted Anderson Valley. She is a gracious host and spokesperson for Mendocino County in general and the Anderson Valley appellation in particular, but she is also a person with some innate toughness. It shows in the Old World-style grapes she picked – Gewürztraminer, Riesling, Pinot Blanc, and Pinot Noir. It has also shown in the singular vision that has driven the company that bears her name.

Her co-winemaker, Kristen Barn­hisel, was in town last week, and we had a chance to taste some of the winery's current line of white wines, and I was again impressed with what must be the best Gewürztraminer ($18) grown in the U.S. It is like a much more expensive version from Alsace, all perfume and roses. Ditto for the Pinot Gris ($18), also very much in the style of Alsace. Both wines taste quite fruity, and people are often fooled into thinking they are sweet, even though they are bone-dry. They're both hearty enough to have with pork shoulder or sausages – profound wines for the price.

We also tasted 10 old-vintage Ander­son Valley Pinot Noirs. The appellation has more variable vintages than Napa and Sonoma, so as we tasted year by year, there was a real difference. The good news is that all were top-notch, and all pointed to the fact that if you had the desire to hold a Handley Pinot Noir for 10-15 years, it should develop beautifully. The 2005 was the best of the bunch, but the current vintage, 2007, ran a close second, and at $29 a bottle, it's a real bargain. To try to save our readers some time, I asked where you might find Handley's wines and I was directed to the Austin Wine Merchant, Central Market, Whole Foods, and Spec's on Brodie Lane. They are worth searching out.