If you're over 6, or do not have a child under the age of 6, stop reading now. There is nothing in PAW Patrol: The Movie for you whatsoever, none of the angst or over-the-heads-of-kids comedy that feature-length adaptations of preschool animated shows usually provide. The nearest this spin-off to the Nickelodeon favorite comes to a parent-friendly gag is a joke about how a band of talking puppy dogs and a small kid pay for jet-powered fire engines and transforming construction equipment (merch! merch! merch!).

Across eight seasons, good-hearted and brave German shepherd Chase (Armitage) and his fellow pups have dealt with accidents and disasters (all injury-free) in Adventure Bay. Obviously, a film needs slightly higher stakes and a larger setting, so they set off to the nearby Adventure City. Kids will get their favorites: construction bulldog Rubble (Hedley), firefighting Dalmatian Marshall (Marshall), recycler Rocky (Shoniker), Zuma (Simons) with his hovercraft/submarine, airborne Skye (Bartlam) and obviously accompanying human Ryder (Brisbin). Plus, of course, their numbskull nemesis, Mayor Humdinger (Pardo), who has somehow gone from running the small town of Foggy Bottom to a major conurbation that clearly has very lax residency requirements for elected officials.

See, that's exactly the kind of joke that probably would have been shot down in the writers' room as not really being aimed at the PAW Patrol audience. PAW Patrol: The Movie is bigger and prettier than the TV show, but it's still PAW Patrol. What makes it worth the time investment for kids is that it's really about introducing the street-smart long-haired Dachshund Liberty (Martin) into the team, while giving a little drama to Chase's life as he processes some old trauma about being a stray in the big city. Yes, merch will be sold, but life lessons will be learned, and getting mad about that age-old Faustian pact of kids' shows seems like a waste of energy.

PAW Patrol: The Movie is the MPAA working definition of "mild peril," with what should be high-stakes disasters either handled with a puppy smile or so absurd that they just seem pleasantly silly. Kids know that Chase and co. will save the day, and there will be some big, bouncy pop songs along the way as their wonderful primary-colored disaster-averting vehicles produce just the gizmo needed for that moment's crisis (merch! merch! merch!). Parents may recognize a couple of the celebrity cameos, but they're likely there because their kids love these dogs. If your kids loved them, you'd do it too, just like you'll watch this movie: because it'll make them happy.

In theatres and on Paramount+ now. 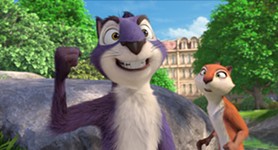 The Nut Job 2: Nutty by Nature
The animated gang return to save their park from an evil mayor