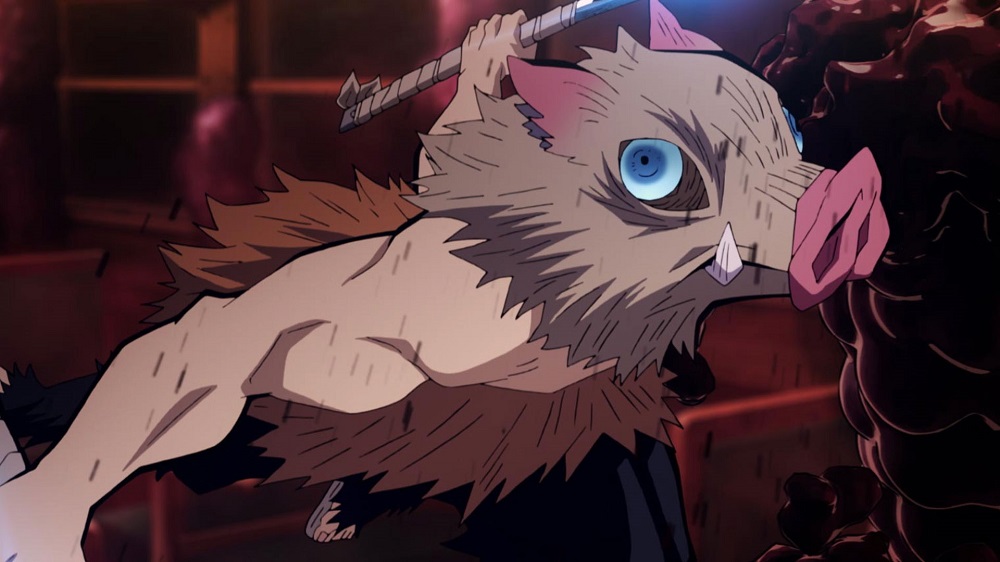 Demon Slayer: Kimetsu no Yaiba the Movie: Mugen Train begins, suitably, in a visit to a graveyard: Kagaya Ubuyashiki (Morikawa in the Japanese version/Mathrew Mercer in the English-langauge dub), his face marked by a curse that will slowly consume him, walking through endless tombstones. Each represents a member of the Demon Slayer Corps who fell in the endless battle against hellish invasion.

Kimetsu no Yaiba: Mugen Ressha-Hen, to give it the original Japanese title, is the first original movie spin-off from the hugely successful Demon Slayer anime, an unexpected blockbuster franchise that has become one of the biggest-selling manga of all time since its debut in 2016. After the huge success of season one, and before the arrival of season two later this year, this feature-length anime adapts the manga's "Mugen Train" arc, a bleak addition to the story that will initially throw the audience off. Three of the young members of the corps are sent into battle: the boisterous and hair-trigger Inosuke Hashibira (Matsuoka/Bryce Papenbrook) under his trademark; eternally-anxious and self-doubting Zenitsu Agatsuma (Shimono/Aleks Le); and Tanjiro Kamado (Hanae/Zach Aguilar) the troubled hero who joined the war against evil after his family were butchered – all except his sister Nezuko (Kitō/Abby Trott), who has been transmogrified into a monster, and now he seeks to restore her humanity. They're assigned to clear a train of demons, and do so in quick order with the assistance of the more seasoned Kyōjurō Rengoku (Hino/Mark Whitten). Movie over.

Well, obviously not, and the wild melding of anime styles that feel at odds with the more realistic look of the show should be a clue that something is awry. A demon, Enmu (Hirakawa/Landon McDonald), has pulled everyone on the train inside their dreams. So far, so Inception, but with an added, vile twist: Enmu has gathered chronic insomniacs to his cause, promising them the sweet release of sleep if they will only help murder the slayers.

Mugen Train plunges straight into the continuity that its huge fanbase wants, and that opening walk among the tombstones sets up that there will be no release from the historical horror aspects that have made the show such a massive success. Plus, unlike so many of the recent big anime movie spin-offs to arrive on U.S. screens, like the fan-service Dragon Ball Super: Broly or the series-wrapping Violet Evergarden, there's not so much convoluted continuity that it's impossible to become immersed in this dark world. Like the train itself, it's self-contained within a larger world, and a surprisingly strong intro to the story.

It helps that Demon Slayer fits into the classic anime mold of wannabe warriors within a strange martial arts setting, and that characters regularly drop exposition through inner monologues. However, so much of the story (and especially the dream/nightmare sequences) revolves around Kamado that everyone else feels a little underserved. Hashibara is one of the best comedy sidekicks in animated history, but the decision to keep Mugen Train weighty puts him in the caboose. Meanwhile Agatsuma gets a great character beat that will undoubtedly pay off down the line, and with its massive success the franchise is definitely on-track for that: but he feels a little lost here.

Where Mugen Train truly excels is in summing up what the series is really about: beyond the spectacular magical conflicts against impossible evil, beyond capturing the seductive horror that the demons offer in return for corruption, it's a series about self-sacrifice (try to spot a veteran slayer without a patchwork of scars). Amid the monster-slaying, there's a pointed celebration of how human weaknesses are really our strengths.