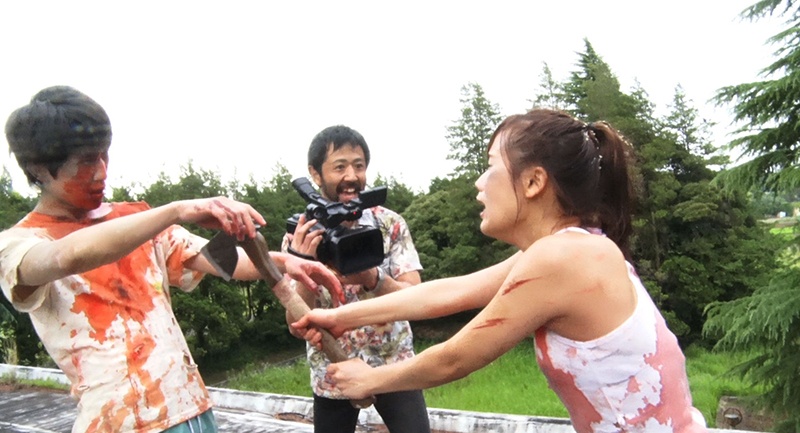 For every Ring or Grudge that made mainstream international horror audiences shriek, there was a low-budget straight-to-DVD or – even worse – TV anthology horror that was charming for its cheapness. One Cut of the Dead is one of those; but not that at all.

It begins as a meta-zombie romp: A film crew is making a cheapo horror movie in an abandoned factory, when real zombies appear and start chasing the lead actress. The gore is cheap, the orchestral score seems synthesized, and the supernatural payoff seems clunky. What stands out is that it's all done in one 37-minute, edit-free, handheld shot.

But even as cheap as it is, why does the camera stay rolling when the director yells "cut"? That's explained by what happens next: a flashback to several months earlier, when karaoke video director Higurashi (Hamatsu) is desperately pitching for a gig. His selling points? "Fast, cheap, but average," as he tells a producer who wants to make a cheap zombie show for a new horror channel. Higurashi knows his limitations, but this seems like fun, so he assembles a team of, well, anyone he can get, which includes his supportive wife Nao (Shuhama) and daughter Mao (Asamori), an overenthusiastic film buff with a habit for getting kicked off sets for being a bit of a know-all.

The film that opens the story is the film they made – so cheaply that Higurashi has to play the crazed director in the movie in a movie, while Nao has to double up as makeup artist and performer (the latter a dream she had given up on years ago). And then the true magic happens. What starts off as a lo-fi gorefest quickly becomes an incredibly charming family comedy about life on the fringes of indie filmmaking, somewhere between Bowfinger and Living in Oblivion. The layers are really flower petals in bloom, and when Higurashi yells "cut" this time, you'll be crying and cheering.

One Cut of the Dead isn't just charming. It's an earnest and funny love letter to all the microbudget dreamers who use all their heart and ingenuity to make their movie (in a wonderful undercutting of the in-film director's megalomania, this is all about cinema as collaboration). Oh, and definitely stick around through the closing credits, to see how writer/director Shin'ichirô Ueda managed to pull off that opening 37-minute sequence. If you love finding out how making movies really happens, this is just one more joyous component of a film that will fill you to bursting with glee.

A version of this review ran as part of our Fantastic Fest 2018 coverage.