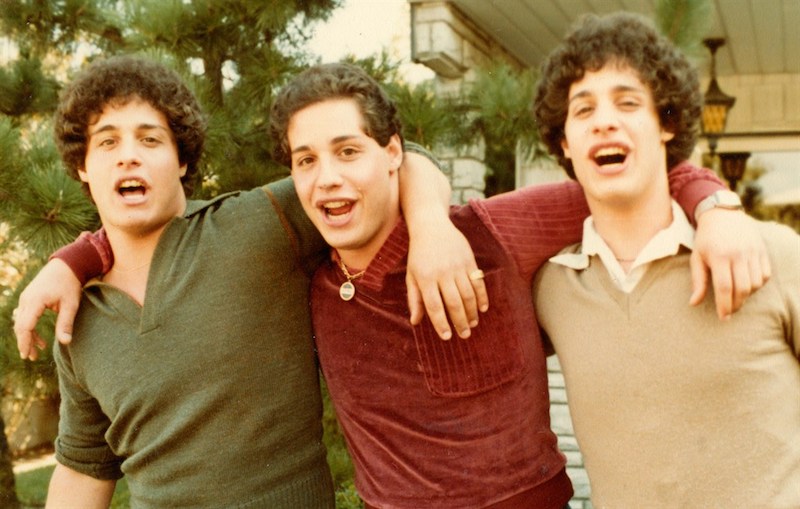 What a story! This stranger-than-fiction documentary starts with the astonishing reunion of identical male triplets – Bobby Shafran, Eddy Galland, and David Kellman – back in 1980. Nearly two decades earlier, they had been separated as infants and subsequently adopted by three singularly different families, none of which had any knowledge of the existence of their sons’ doppelgängers. The story is told by those intimately familiar with its believe-it-or-not narrative, beginning with the grownup version of Bobby (now a 56-year-old man) excitingly recounting that fateful first day on the campus of an upstate New York community college. The bright-eyed freshman knows no one there, but oddly enough, everyone seems to know him. When one of the students incredulously tells Bobby about Eddy, a former classmate at the school who’s Bobby’s dead ringer, the two lookalikes waste no time comparing notes: Same birthdate, same birth hospital, same adoption agency. Once their newsworthy human interest story hits the press, it takes an even more bizarre turn when David phones one of the young men’s aunts to announce his possible kinship to the two instant celebrities, given he looks exactly like them as well. “Oh my God, they’re coming out of the woodwork,” she exclaims, before dropping the receiver in shock. It’s like an episode of The Twilight Zone scripted from real life.

The initial section of this fascinating movie is a real high. Through home movies and video clips, you witness the exuberant happiness that the immediately inseparable brothers experience in the company of each other and the limelight. Their 15 minutes-plus of fame ticked off in a round of talk show appearances (remember Phil Donahue?), late-night carousing at Studio 54, and even a cameo opposite Madonna in the 1985 film Desperately Seeking Susan. Hugging, holding hands, and grinning from ear to ear, these boys with dark Raphaelite curls are celebrated as proof of nature trumping nurture, inextricably bound together by their DNA. After all, they like the same colors, the same clothing, the same type of women, even the same brand of cigarettes. But the silver lining to their seemingly happy ending starts to tarnish once questions are asked about their adopted family placements and the ethically suspect social experiment in which they unknowingly participated as children. When the answers to those inquiries – slow to come, difficult to comprehend – are revealed, the movie’s elation gives way to something darker, sadder, even tragic.

Director Wardle is a fine storyteller, patiently pursuing the truth with an aim to give both the surviving triplets and his audience a sense of closure to this incredible saga. (He gets a big assist from Austin’s own Pulitzer Prize-winning journalist and author Lawrence Wright, whose interest in the topic originated when he was researching an article about identical siblings reared apart in the early Nineties.) Although the movie occasionally stalls, it’s only because the facts are not easily forthcoming, rather than due to any fault of the filmmakers. Indeed, when the film eventually challenges its earlier presumptions in the nature vs. nurture debate, you realize how skillfully this unassuming little documentary is put together. Three Identical Strangers may not achieve the kind of redemptive catharsis we wish for here, but it achieves something almost as miraculous, making an otherwise unbelievable story seem believably real.