Since its initial publication in 1818, the ideas put forth in the novel Frankenstein; or, the Modern Prometheus have sparked countless conversations and scores of related theatrical and cinematic works. One of the founding narratives of modern science fiction, Frankenstein’s fame came to surpass that of its 21-year-old author Mary Wollstonecraft Shelley. In fact, the first published edition of the novel was published unsigned, with a foreword written by the poet Percy Bysshe Shelley, Mary’s acclaimed husband, who was widely presumed to be the book’s author. The film Mary Shelley seeks to set the record straight.

Two hundred years later, Mary Shelley’s reputation does not seem in as dire need of reclamation as when her novel was published anonymously. The book’s themes about the monsters we humans create have garnered enough resonance in our modern era of post-psychoanalytic and feminist analysis that we can no longer be obscure or overlook the author’s proper credit. Much has been made of the novel’s birthing by a female author, who was all too intimate with the death of her own infants, and her own mother’s death as a consequence of birthing her. Born to Mary Wollstonecraft, an advocate of women’s rights and the author of the seminal feminist tract A Vindication of the Rights of Women, and William Godwin, the illustrious but impecunious author, political philosopher, and publisher, Mary Shelley’s writing pedigree was supremely promising. Her relationship with her eventual husband Percy Shelley and the lauded poet Lord Byron (father of the child borne by Mary’s stepsister Claire) sealed her place in literary history. Still, her popular reputation pales in comparison to those famous Romantic poets, remembered now as much for their rakish lifestyles as their immortal verse.

While fudging some of the facts of her biography, Mary Shelley intends to give the author her due. The film hits all the marks about female authors finding their own voices and not settling for becoming mere muses to their beloveds. Yet while covering its bases, the movie lacks luster. Ironically, this story about the sources of inspiration is empty of just that: inspiration. Working from a screenplay by first-timer Emma Jensen, director Haifaa al-Mansour delivers a serviceable biopic and cautionary tale for all young girls swept up in their self-diminishing adoration of artistic rogues. Al-Mansour, the Saudi Arabian director of the multi-awarded film Wadjda, is widely credited as that country’s first female director, and her switch to Edwardian England for her sophomore effort is a bold, if not fully successful, move. Her film is also mired with a turgid musical score by Amelia Warner, and unconvincing but far from ruinous central performances by Fanning as Mary and Douglas Booth as Percy. As a filmed drama, Mary Shelley is sorely in need of a jolt of electricity similar to the one that reanimated Frankenstein’s monster in the author’s novel. 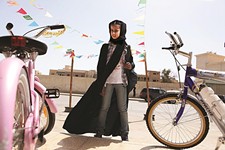 Wadjda
In this first Saudi Arabian film ever directed by a woman, much is revealed about the reality of life for women there via its story of a 10-year-old girl who wants a bicycle.