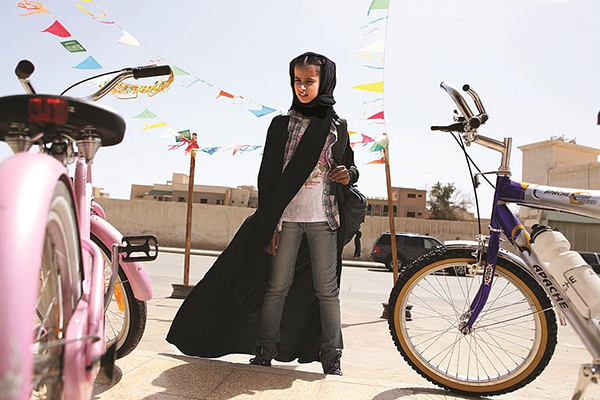 Wadjda is the first Saudi Arabian film directed by a woman, which is no small feat in a kingdom where cinemas are outlawed (although television and satellite dishes encourage in-home viewing) and the proscriptions governing the public lives of women can be as dark and all-encompassing as the abayas and niqabs they wear outside in the desert sun. Wadjda is also the name of this film’s 10-year-old protagonist (Waad Mohammed), a resourceful and self-possessed young thing, who we can tell is a square peg during the film’s opening moments when her hi-top sneakers with purple laces peek out from the bottom of her abaya, in contrast to the rest of her classmates.

If Wadjda, this Muslim girl, calls up film memories of adolescent Marjane Satrapi in Persepolis, whose Western-loving lifestyle is uprooted by Iran’s Islamic Revolution, or the young women in Jafar Panahi’s Offside, who countermand the rules that forbid them from entering stadiums to watch men’s soccer matches, you wouldn’t be far off the mark. Wadjda is not so much a coming-of-age story as it is a story about the religious and cultural restrictions placed on women in modern-day Saudi Arabia, the birthplace of Islam. Writer/director Haifaa al-Mansour’s story is relatively simple, although the world it reveals is deeply complex. Strong performances keep the focus on the drama and prevent the film from becoming invasively didactic. Yet there’s no escaping the fact that Wadjda will serve as a clarion call to a new generation of Saudi women.

“A woman’s voice is her nakedness,” teaches the headmistress at Wadjda’s school, where the girls are learning, among other things, to shed the freedoms of their childhood for the proprieties of Islamic womanhood. More than anything, Wadjda wishes to ride and own a bicycle, a desire brought about by a racing challenge she issued to her friend Abdullah (Abdullrahman al-Gohani), a boy her age with whom she shouldn’t be associating in the first place. But riding a bicycle is forbidden as detrimental to a girl’s virtue. Determined to raise the funds on her own, Wadjda enters a Koran-recitation competition in order to win the prize money. Her sympathetic mother (Reem Abdullah, Saudi Arabia’s most famous TV actress) won’t buy her a bike either, but she faces transportation burdens of her own. In a country where women are forbidden to drive, she is dependent on male drivers to taxi her back and forth to work and to the shopping malls. Additionally, Wadjda’s mother is trying to convince her husband – Wadjda’s father – not to take a second wife, as he’s encouraged to do because of her inability to produce a male heir. The comparisons between the realities faced by the young girls and adult women are always evident as are the contrasts between the ways in which the female sex behaves and dresses at home and in public.

“Catch me if you can,” shouts Wadjda in the film’s closing line. It’s a personal and universal challenge that resounds well beyond the cinema’s four walls. 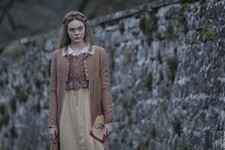