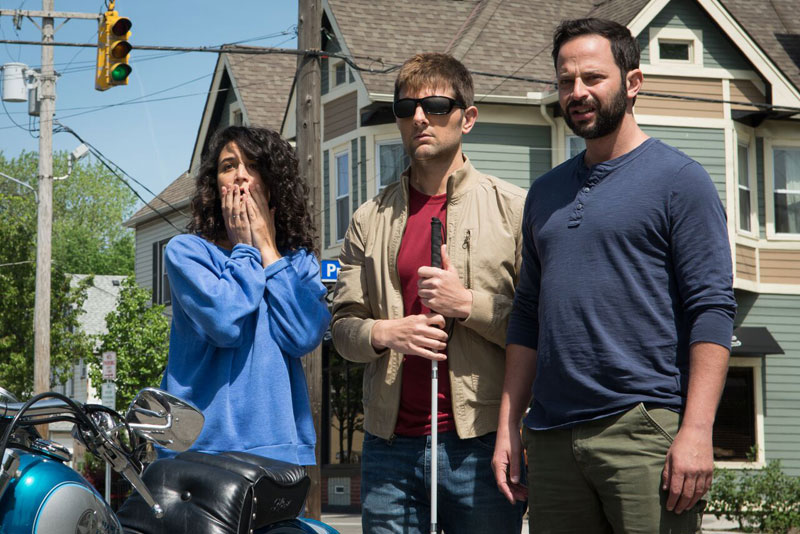 Adam Scott was robbed of his rightful title as the internet’s boyfriend, a pop-culture-now! meme that arrived after Scott’s Parks and Recreation run as dream-dork Ben Wyatt. But let’s cram down those cuddlesome feels and get real: Adam Scott’s more interesting to watch playing a champion prick, which is just what he does in My Blind Brother, an indie romantic comedy by writer/director Sophie Goodhart that had its world premiere at South by Southwest in March.

Scott plays Robbie, the title’s blind brother, who lost his sight in a childhood accident, but has found purpose as a dedicated athlete with a charity foundation and handsome face the local news loves featuring in human-interest stories. Robbie runs marathons, with the assistance of his younger brother Bill (Kroll) as his sighted guide. Bill’s role is an essential one, but in every other way he’s overlooked by his domineering brother and their parents. Almost catatonically depressed and still living in his childhood bedroom, Bill has withered in the shadow cast by Robbie, the golden child.

Enter Rose (Slate), who dates Robbie but may be falling in love with Bill, with whom she shares an impressive store of self-loathing and a sort of energy-starved outlook on life (their idea of a fantasy date is a TV binge together). Apathy! Extreme narcissism! Torturous guilt! Sure beats the usual boring character traits of a movie love triangle – and better cast than most, too. Goodhart’s film is a winner – sweet but not sentimental, tart without turning sour. The studio-produced romantic comedy may be flatlining, but who cares, so long as snappy indies like this one step up to fill the void?