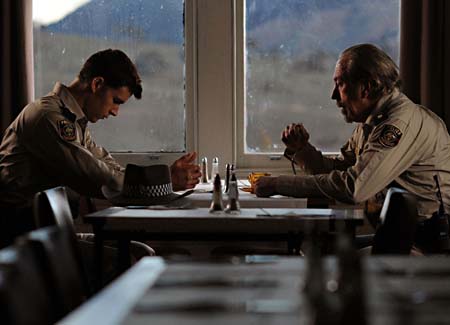 What the hell is up Down Under these days? Australian directors and actors have been flooding the international film market of late with some spectacular updates of classic Hollywood genres. Nash Edgerton's The Square and David Michôd's Animal Kingdom were two of the best thrillers of the past year (from any country) and now Hughes, in his feature debut, has gone and rebooted the notoriously difficult Western genre with this savage, contemporary take on the lone lawman facing down a brutal killer while the townspeople cower or flee. High Noon's mellifluous refrain, "Do not forsake me, oh my darling," could be just as easily applied here. Youthful Constable Shane Cooper (!), played to angsty perfection by True Blood's Kwanten, has what can only be described as a truly bad day at his new job. Freshly relocated from the big city to the tiny, backwater township of the title with his very pregnant wife (The Square's van der Boom), Cooper finds the bucolic countryside a safe and hopeful change from the bullet-ridden rigors of metropolitan policing. His new boss, the cantankerous and flinty Old Bill (Bisley, best known to American genre fans as Mad Max's partner Jim Goose), sets the reverential tone of the film when he remarks, of two men riding horses through the center of town, "There's a sight I haven't seen in a while." Indeed. But, as in the classic Westerns of Anthony Mann, Fred Zinnemann, and Don Siegel (not to mention Sam Peckinpah, whose penchant for extreme, operatic violence is echoed here), it's going to be a very bad day amongst the black mountains that surround and envelop Red Hill. That's because convicted murderer Jimmy Conway (Lewis) has broken out of prison and is headed for the town and, more specifically, Old Bill, the man who put him away 15 years ago. The horrifically scarred Conway, an expert tracker of Aboriginal descent, is made out to be a force of nature in a Stetson and duster, a human – or possibly inhuman – counterpart to the massive storm front that's also making its way toward Red Hill. As Old Bill literally shuts down the town and arms a posse to the teeth, Cooper (and the audience) is left to wonder why the agents of the law are so plainly terrified about this particular fugitive and why they look like they're preparing for all-out war. Dark secrets run deep in small towns, and when, in the midst of an epic bloodbath, the truth is finally revealed, it has everything to do with the past. References to Hollywood oaters abound – echoes of Sergio Leone's Once Upon a Time in the West and its unpeaceful railways are key – and if Red Hill isn't quite a classic, it surely is a work of genuine passion for a genre that's unmistakable, and unkillable.