An end-of-summer burst of adrenaline, The Hitman’s Bodyguard promises nothing more and nothing less. If the movie’s a little too long and repetitive, that’ll only serve to sell more popcorn, and even though it lacks a true creative spark, that failing won’t be enough to override the comfort of the familiar. Bullets spray, cars and buildings explode, a good portion of the Netherlands is obliterated, and our likable rogue heroes banter between lethal rounds. There’s even space for flashbacks. The only thing missing is ingenuity.

Patrick Hughes, the director of The Expendables 3, delivers another superstar action movie that’s more about the names above the title than plot. Here, Ryan Reynolds and Samuel L. Jackson, as the film’s bodyguard and hitman, respectively, fuss and fight (both against each other and in unison against their common enemy), and although the script by Tom O’Connor affords each actor a nice share of bon mots, the two never forge a sense of real chemistry. Viewers only need to think back to Midnight Run for a better-executed example of mismatched bad guys on the run. Reynolds plays “executive protection agent” Michael Bryce with a sneer that’s only a few steps removed from his iconic Deadpool character. And Jackson plays Jackson, a persona so well-established that it becomes a self-aware meta-comment when Bryce exclaims that Jackson’s Darius Kincaid has “single-handedly ruined the word ‘motherfucker.’” One thing that unites these two hard-boiled killers, however, is that they’re both fools for love. Bryce’s ex-girlfriend Amelia Roussel (Yung) is the Interpol agent who ropes him into the mission, and Kincaid’s wife Sonia (Hayek) may be the only person alive who’s tougher and more foul-mouthed than he. Apart from the flashbacks, Salma Hayek performs all her scenes solo from the confines of a prison cell. Similarly, Gary Oldman, playing the former president of Belarus who’s on trial at the Hague for war crimes as well as being the film’s excuse for setting its plot into motion, performs all his scenes in isolation from the other leads, alone with only his latest accent for company.

Bluesy R&B tracks by tunesmiths ranging from Leadbelly and Willie Dixon to Chuck Berry and Lionel Richie pump the action during each melee (and there are a lot of them, so it’s a good, if extraneous soundtrack), and Jackson performs a tune he wrote for the film over the closing credits (which also offers one amusing outtake at their very conclusion). By that time, the refill on your tub of popcorn should be drained. 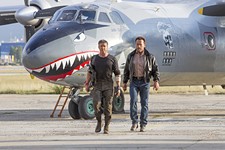