“One friend in a lifetime is much; two are many; three are hardly possible. Friendship needs a certain parallelism of life, a community of thought, a rivalry of aim.” I can't say whether Martine Dugowson read those words of Henry Brooks Adams before beginning the script for this fanciful parable of friendship, but they certainly apply to the work she has produced. The film follows the entwined lives of Mina and Ethel, two souls both alike and different, who bond to each other as girls and remain steadfast until their lives diverge from parallel tracks. The friendship is born in the girls' kinship as outcasts: Mina is ostracized for wearing glasses, Ethel for being overweight. They come together as misfit 10-year-olds and provide support for each other through their teens as they try awkwardly to make the social grade. As long as they are beyond the social pale, they are fast friends. But as they reach adulthood and both at last begin to find acceptance -- Mina as an unspectacled painter, Ethel as a slender journalist -- their paths take different directions, and their friendship begins to suffer. Unfortunately, the same might be said for the film. Initially, Mina Tannenbaum skips with whimsy, in the girls' endearing insecurities and the playful images Dugowson tosses in, such as a hall full of waltzing nurses or ghost images of the girls as they see themselves: Mina as a rabbinical student, Ethel as a vamp. The further it takes us into Mina and Ethel's adulthood, however, the more brooding the film becomes. By the end, it has become almost another movie entirely, a needlessly sober, unfortunately obvious melodrama. The sugar of the first half turns to ashes, and it seems wrong, not because it's unlikable but because the film's heart seems to lie in whimsy; it feels truest when it's being playful. Still, even at its most labored, the film is kept watchable by the leads. Bohringer fills Mina with a striking intensity, bright water kept in check, forever turning in on itself, churning. Zylberstein, by contrast, is open sky and dizzying sun; her smile -- which really just bursts upon her face -- is as bright and appealing as any I've seen on film. They bring such light to these characters that their friendship continues to glow when everything around it has gone dim. 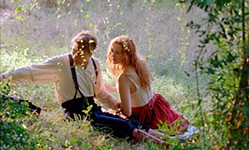 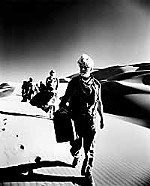 The King is Alive
Ultimately, I think, it comes down to aesthetics -- a necessarily vague and academic-sounding term, like “postmodern” or “organic.” Twenty-five-cent words that people like to ...