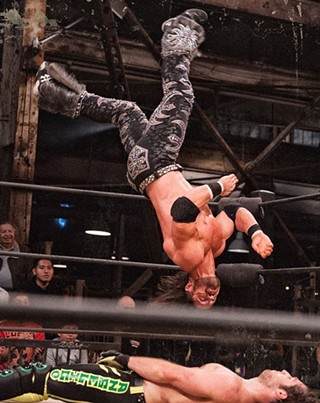 What goes up, comes down hard: Johnny Mundo of Lucha Underground comes to Austin for SXSW. (Image courtesy of El Rey Network)

Charismatic bad guy Johnny Mundo has wrestled all over the world, and he's heard the same story over and over again. "A lot of promotions always say they're going to do something completely different, like this is the revolution of wrestling." The difference with Lucha Underground is that they really may be changing the business.

Lucha Underground has hit a sweet spot among wrestling fans, combining the over-the-top drama of telenovelas with the over-the-top-rope athleticism of Mexican Lucha Libre and the high production values of American cable. The gold standard for televised wrestling has been the WWE, but theirs is a mobile show, traveling in convoy from city to city, usually broadcasting live, which creates restrictions. Lucha Underground has the advantage of having a single location, dubbed the Temple, and is configured more like a traditional TV studio: Shot specifically for Robert Rodriguez's El Rey Network in 4k and 6K, the show has 12 cameras recording live to tape, with coverage shots, so no piledriver or shooting star press, or Mundo's trademark finisher, a split-legged corkscrew moonsault, goes unfilmed.

During SXSW, the promotion will take its first ever road trip, with Lucha Underground Live: Austin Warfare at the Austin Music Hall. That will be preceded by a panel, "The Creation of Lucha Underground," open to all badgeholders.

Mundo's been part of the show since before day one. He was contacted in 2013, a year before shooting started, by producer Christopher DeJoseph; the pair knew each other from the WWE, where Mundo wrestled as Johnny Nitro, and DeJoseph was a writer. "He's like, 'I'm starting a wrestling promotion. It's going to be this and that,' and I say, 'Sounds great, DJ.' Then he calls me a few months later, says, 'We're still doing it.' OK, sign me up."

Before production began, DeJoseph invited him to check out the set at a warehouse in L.A.'s Boyle Heights. Fortunately, Mundo knew the address, because he'd previously shot action horror 20 Ft Below: The Darkness Descending there with Danny Trejo. He said, "When I shot the movie, it was a dump. Rat poop, crap all over the place, stray cats. When I got out of the car and walked in … it was still a dump. But the Temple set was awesome, and they used the grit and grime of that place. It wasn't really dirty any more. It was movie-dirty."

The venue had another big attraction for Mundo. "Did I mention I live five minutes away?" That's a huge change, because modern pro-wrestling means life on the road, with the top stars often away from home for 250 to 300 days a year. Mundo said, "People don't understand what a big deal it was for me in season one to turn up with my bag, with four foot coats and a bunch of tights, and just leave them at the building."

Those changes allow Mundo to concentrate on what's really important: his in-ring performance. "Usually, every match in the WWE, I was the one with the stupid ideas. I'm trying to figure out how to jump off the stage, or turn the logo into a weapon or obstacle. I was always watching Jackie Chan movies or Tony Jaa, and putting moves that I saw in Rumble in the Bronx into matches. When I got to Lucha Underground, that mentality helped me immeasurably, when it came to working guys like Prince Puma, and a lot of the guys from [Mexican wrestling promotion] AAA. It was kind of weird, because I was going, man, they have stupider ideas than I do. Now I'm the one going, 'No, we can't do a Spanish Fly off the bandstand. That's crazy.'"