Down the Rabbit Hole With Something in the Dirt The truth is [not] out there: Aaron Moorhead and Justin Benson in Something in the Dirt (Image Courtesy of Fusion Entertainment)

There's a fine line between being intrigued and being fixated - and it may well be the thickness of a dog's hair.

Aaron Moorhead apologizes profusely when it seems that he's sporadically distracted during our conversation about Something in the Dirt, his new film with long-time creative partner Justin Benson. Over the pandemic he gained a new roommate, an adorable pup named Rooster, who was wandering into his line of sight until the filmmaker picked him up. There's nothing like a dog for keeping you grounded, he explained: "They're the physical equivalent of mindfulness. ... You can have everything going on in your life, good and bad, and they are so absent from it. You can have the best day of your life, and they are just zoning out in your lap. You can have horrible things, and everything's falling apart around you, and the dog's just happy to see you."

Dogs are blissfully distracting, which might have saved the central characters in Something in the Dirt from the spiral into conspiracy theories that swallows them whole. Trapped in their neighboring L.A. apartments during the unnamed pandemic (during which writer/director/star Benson and director/star Moorhead filmed the movie), best-friends-by-circumstance Levi and John become obsessed with a bizarre crystal that they find in a closet. Benson said, "These guys are the next evolution of supernatural mythology in which you filter everything through an internet search. It started with sun gods, went to fairies and vampires, and ended up on Quora."

But that doesn't stop them being endlessly enthralling, a fascinating if crazy tale that gets better with each embellishment. That was, as Moorhead noted, part of what made The X-Files so much fun. So, since everyone has their own favorite conspiracy theory, which ones most intrigue the filmmakers?

But if you dig into it there's these wild photos of people posing for photos on Ellis Island in front of nothing - with just a whole bunch of sky and headroom - and it's like the Statue of Liberty used to be there just disappeared. And there are these weird photos online where people, without comment, have just photoshopped out the Statue of Liberty and kept the base, so it's a bunch of people are just wandering around the base and nothing's there.

What's really happening is that people are just bad at photography sometimes, but it's such an incredibly fun conspiracy, that the Statue of Liberty moved because the multiverse changed.

(Note: of course Benson and Moorhead would know about multiversal conspiracies, since the duo are taking the reins on season 2 of Marvel's Loki on Disney+ after their success directing two episodes of Moon Knight)

There are precedents for just rewriting realities, like how somehow in the late 1930s Los Angelinos stopped using the Spanish pronunciation, with the hard g, to a new, Anglicized version with a soft g. Listen to vintage radio shows from the era, and there's a demarcation point at which everyone just decided that their linguistic reality was wrong. "We do that with neighborhoods," Benson added. Case in point: Los Feliz. "We all call it Los Fee-lez, but in actuality it's Los Fay-lease.

Justin Benson: Here's one that's really interesting because it involves children - the Zimbabwe UFO incident, where apparently an aircraft landed near an elementary school playground, the chidren ran out to it, some beings got out of the aircraft, and telepathically communicated with the children that we're headed towards some massive environmental issues, and we need to look after the planet better?

Do I believe that happened? Everything in me goes against it, but there are a whole bunch of people who are grownups now that say, 'No, this definitely happened when I was a child." There was a pretty well known Harvard psychiatrist, John Mack, who went there, interviewed the kids - their interviews are on film, and it really seems like they saw it. I can't explain it, but it's a really interesting conspiracy.

AM: Either a hundred schoolkids got together and agreed to lie for the rest of their lives, or somebody perpetrated an impossible hoax upon them. And it's literally impossible, because there's telepathy involved, there's UFOs involved, there's the fact they don't look like humans involved. 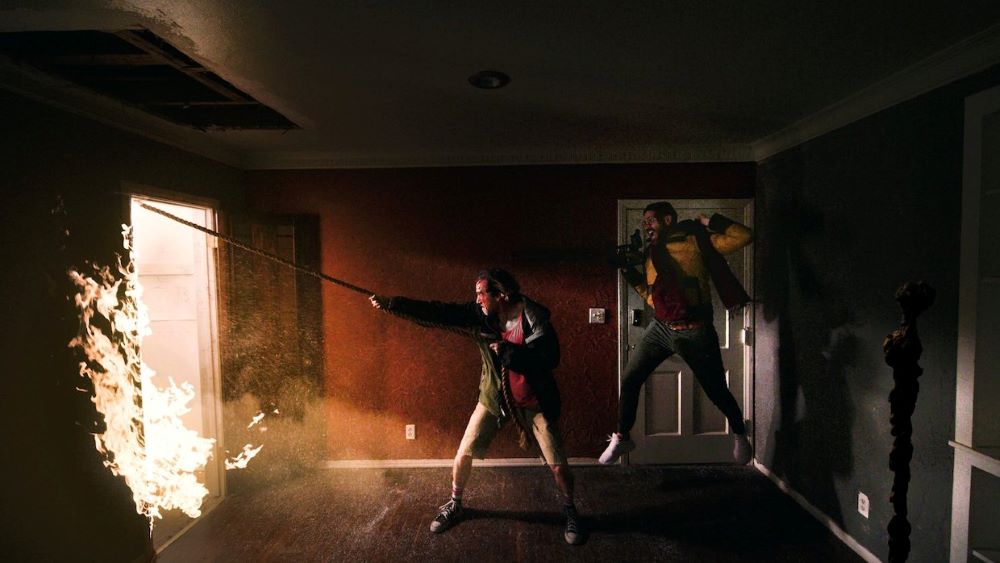 "These guys are the next evolution of supernatural mythology in which you filter everything through an internet search." Justin Benson (right) on the characters played by himself and co-director Aaron Moorhead (left) in Something in the Dirt (Image Courtesy of Fusion Entertainment)

Conspiracies that are formulated by people desperate to make sense of the world are one thing: Conspiracies that are deliberately formulated and promulgated to distract people from what's going on? That sounds like a conspiracy theory of its own, but such disinformation campaigns are surprisingly common currency. What if someone did have a vested interest in getting all those kids to believe a UFO landed?

Such deliberate hoaxes have been promoted before, as portrayed in the 2013 documentary Mirage Men. Benson explained, "[Kirtland Airforce Base] had aircraft that the government didn't want people to know existed, so they create a false narrative to throw them off."

Enter Special Agent Richard Doty of the United States Air Force Office of Special Investigation, who job, as Moorhead put it, was "to drive a UFO guy insane.' [He would] go to the UFO community and say, 'We'll give you a little bit of access.' They'd make some noise, so that foreign governments would believe it was possible that the US government had UFO technology."

Not that such campaigns are anything new. There were military personnel present on the site of the famous Roswell crash (ground zero for UFOlogy) who admitted on their death beds that it was a hoax. But then there's what happened with the famous Phoenix Lights of 1997: "Thousands of sightings of not just lights but giant delta-shaped craft, at low altitude, hovering silently over Phoenix, Arizona," said Moorhead. Infamously, Arizona Governor Fife Symington III held a press conference "where he says 'I've found the culprit' and he brings out someone dressed as an alien in handcuffs, and they all had a joke, and really pissed off the UFO community because a lot of people went, 'I saw that. You can't be making fun of me like that, it scared the hell out of me.'"

But as is always the way, there was another twist, when Symington appeared on CNN on the tenth anniversary of the sightings. Moorhead said, "He came out and said, 'I can't regret that more. It was something my office came up with as a bit of a joke, but the reality is that I saw something that night too. I can't explain it, and I didn't mean to invalidate the whole thing. I just wanted to turn down the temperature a little."

Something in the Dirt is available on VOD now. Read our review here.

Aaron Moorhead, Justin Benson, Something in the Dirt