Hello to New Friends Again, Down in Fraggle Rock

Behind the scenes on the revival of the beloved puppet show 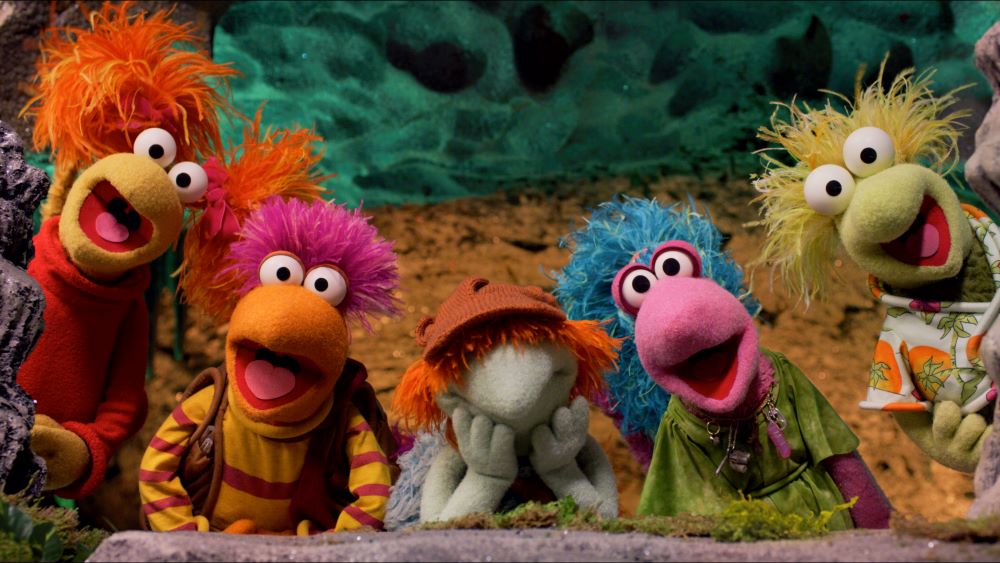 Red, Gobo, Boober, Mokey and Wembley in Fraggle Rock: Back to the Rock, now streaming on Apple TV+. (Image Courtesy of The Jim Henson Company)

Imagine being an adult and walking on to a place of magic and fantasy from your childhood. That's what Alex Cuthbertson and Matt Fusfeld got to do every day as showrunners for Fraggle Rock: Back to the Rock. "It was better than anything," said Cuthbertson.

The new series, which debuted on Apple TV+ today, put the duo in the middle of a place that defined so many childhoods, among old friends like Red, Wembley, Gobo, Boober, and Mokey Fraggle, the hardworking Doozers and the trollish Gorgs, all the strange creatures that live in Fraggle Rock. Characters who are real, given life by the puppeteers of the Jim Henson Company, even if talking to the performers rather than the Fraggles took an adjustment. "I'm not used to it, and I don't wanna get used to it," said Fusfeld. Talking to the puppets, "it's the best."

“It’s about comedy, it’s about silliness, it’s about music, it’s about that we’re all in this together.” – Fraggle Rock: Back to the Rock showrunner Matt Fusfeld
A return of the 1980s series, this is the old Fraggle Rock but more. "The original was beautiful," said Cuthbertson, "but it was made for the cameras of that time and the cave was much smaller. With 8K cameras, it has to look really incredibly detailed, and [production designer] Tyler Harron brought it all to life. With 3D printing and the modeling they were able to create something that looked like Fraggle Rock." His one regret was that they were filming under COVID protocols, "because we were really limited about who we could bring to visit because it would be the most fun set to bring friends and family on to of our entire career, that's for sure."

The duo leapt at the chance to enter this world, right from their first meeting with Jim Henson Company President of Television & Executive Producer Halle Stanford, CEO Lisa Henson and puppet captain John Tartaglio. "They said, 'What do you think about redoing Fraggle Rock?' We said, 'Yeah, let's do Fraggle Rock. Let's not mess with it. Don't make them weird lawyers or in outer space or wild west Fraggles. Let's do Fraggle Rock and keep the soul and spirit of the original in tact."

So why bring the show back if you're staying so loyal? For Stanford, it's because the original show gave kids what they needed when Jim Henson first launched it in 1983, "but we need different things now." She explained, "We need to deal with anxiety in the world right now. We need to look at the way we treat one another, we treat refugees. We need to look at natural resource scarcity, and all of these heavy topics are in Fraggle Rock and can be delivered because it's a fantasy universe. ... Kids can hear about Wembley having an anxiety attack and really process and take it in, and I'm not sure they would have the same openheartedness to seeing a real child having that sort of anxiety."

Openheartedness is a word that comes up a lot when talking about the Fraggles. Fun's another, and so is joy. "It's kind of simple in a way," said Fusfeld. "It's about comedy, it's about silliness, it's about music, it's about that we're all in this together."

As TV veterans, Cuthbertson said, "We're used to writing for shows with characters that love each other. We're used to writing what could be called hangout shows like New Girl and Community where it's all about character interaction." But what they couldn't afford to include was the occasional bursts of dark comedy that defined those shows. It helped that they had what they dubbed the Fraggle Gaggle - including Henson veterans like producer/performers Prell and Dave Goelz (returning as Red and Boober Fraggle respectively) - Tartaglia (who Cuthbertson called "a walking encyclopedia of Fraggle knowledge) as well as the new writing team, poets, musicians, and more available to talk about what made the original special. Cuthbertson said, "Any time we tried to get a little too crazy, we were reminded of what the spirit was."

“Any time we tried to get a little too crazy, we were reminded of what the spirit was.” – Fraggle Rock: Back to the Rock showrunner Alex Cuthbertson
Cuthbertson admitted that their steepest learning curve was in writing for puppets, "simple things like how they walk around the room, going through an archway or a door. We were working in a world with a lot of water, and Fraggles love to swim but puppets don't love to swim, so how do you get a character that loves to be in the water safely into the water that then has to be puppeteered by a puppeteer in a wet suit with their arm through a rubber sleeve?" That meant not being precious about the script once it left the writers' room, and instead showing some very Fragglesque collaboration with the episode directors and the puppeteers. "There was a lot of listening to them and saying, 'OK, here's the intent. Here's what we're trying to create in the moment. What can be done?'"

"And it was never a case of a puppeteer being like, 'This doesn't work,' added Fusfeld. "It was always, 'this doesn't work, but here's what I think does work,' and nine times out of ten it was better than the intent."

This is actually the fourth collection of adventures for the Fraggles. Aside from the original five seasons (running 1983-1987), there was a one-season animated reboot for NBC in 1987; then 2014 saw the release of The Doozers, a computer-animated show about everyone's favorite tiny green builders; next, in 2020 Apple TV+ audiences were reintroduced to the their subterranean friends via a series of shorts, Fraggle Rock: Rock On!.

How have they lasted so long, and across so many generations of kids? Stanford said, "There are so many answers to that question but I would say is, at the heart of it is that the joy of the Fraggles is what keeps them timeless. Their openheartedness, their silliness, their vulnerability - and that they're puppets. Puppets feel real, feel believable."

And Fraggle Rock: Back to the Rock enhances that believability, even if it's on new scale, and utilizes puppetry and set building technology of which the original Henson crew could only dream. Per Stanford, the remit was simple: "Make it bigger. ... You could think, 'Wow, I could go down that hole and end up in an ice cave,' or 'let's do puppet magic. Let's do stunts. Let's put Wembley on a sled. Let's have Gobo hanging over a big cavern. Let's have some fun and adventure.'" 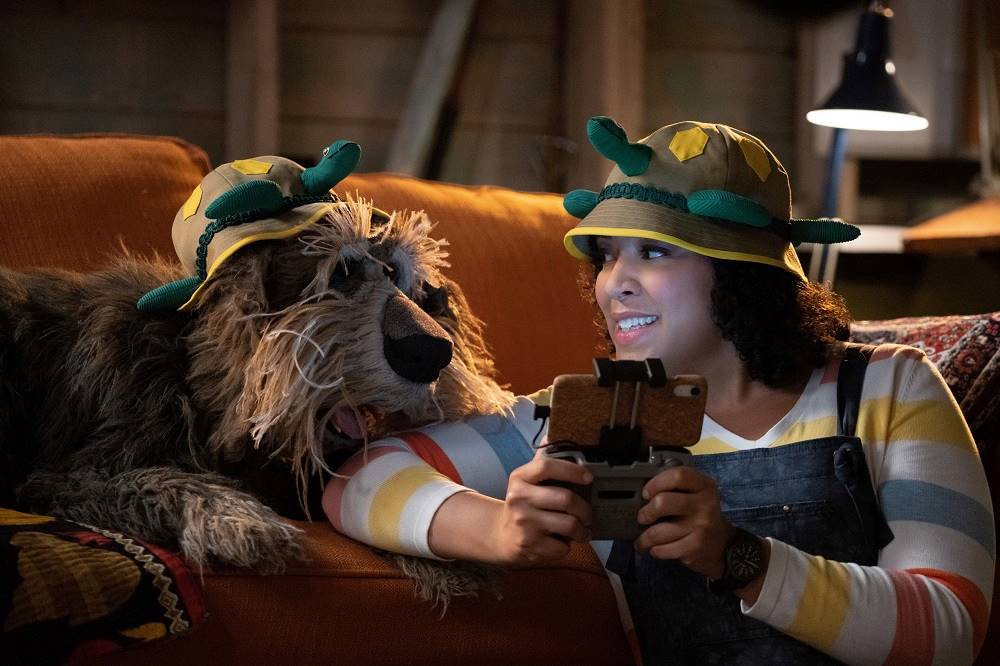 Jim Henson Company President of Television & Executive Producer Halle Stanford said that, in Broadway actress Lilli Cooper, Fraggle Rock: Back to the Rock found "a Doc that speaks to everyone around the globe." (Image Courtesy of The Jim Henson Company)

Then, of course, there's Doc and Sprocket. Above the world of the Fraggles and the Doozers, in Outer Space, there live what Uncle Traveling Matt calls the Silly Creatures (better known as humans), one of whom lives above Fraggle Rock with a dog named Sprocket. American audiences, and many others around the globe, have fond memories of Gerry Parkes as the kindly old inventor. But if you were living in Germany in the 1980s, Doc was played by Hans-Helmut Dickow, while the French Doc was a baker (Michel Robin). As for British viewers, they'll remember a kindly old lighthouse keeper called the Captain, played by Fulton McKay, who was succeeded by by his nephew, P.K. (John Gordon Sinclair) and son, B.J. (Simon O'Brien).

So would there be one Doc or many? Stanford explained, "There was the conversation back and forth, 'Do you localize?' and of course Apple was, 'No, we need to drop it all at once.' So we really had to imagine - everyone's used to different Docs and Sprockets, but how are we going to create a Doc that speaks to everyone around the globe?"

“This show’s a lot about imagination, magic, fantasy. ... It’s about making the world a better place.” – Jim Henson Company President of Television Halle Stanford
As one of the biggest changes from the original show, there was definitely a pressure to get Doc right, especially for Stanford who sees a lot of herself in the character ("I'm like, 'I'm gonna change the world!'"). The idea for this iteration developed quickly: the team wanted this Doc to have a youthful energy had to be relatable to kids, they definitely wanted her to be a woman of color, and they wanted her to be a scientist. "This show's a lot about imagination, magic, fantasy," said Stanford, but more importantly "it's about making the world a better place, transforming the world, and you know what else is gonna make that happen? Science."

Enter Tony-nominee Lilli Cooper (SpongeBob SquarePants: The Broadway Musical, Tootsie) as Doc, a boundlessly energetic marine biologist grad student constantly befuddled by all these parcels for Gobo Fraggle that turn up at her seaside shack. But if that part was easy, then the casting of her costar was much tougher. "There was some conversation: is this the same Sprocket? Is this the same Sprocket? Is it the Sprocket of the old Doc? We finally went, it's just Sprocket."

And in some ways it's finding the simple answers that explains why Fraggle Rock: Back to the Rock has returned right now. Of course nostalgia plays a role, Stanford said, but that could be placated by re-runs. Instead, she wants audiences to feel that same monumental sense of fun and joy that the cast and crew felt when they stepped on the set. "It's a celebration of life," Stanford said. "I think everybody needs Fraggle Rock right now."

Season one of Fraggle Rock: Back to the Rock is streaming on Apple TV+ now.