Fantastic Fest Interview: The Boy Behind the Door

David Charbonier and Justin Powell on their dark thriller Lonnie Chavis as Bobby, the kid who won't leave his friend behind, in Fantastic Fest thriller The Boy Behind the Door

Child abduction is a bleak subject for a tense thriller to tackle, especially when it's all told from the kid's point of view. But in between the horrors of two boys trying to evade their brutal kidnappers, The Boy Behind the Door is really about something much more powerful: Friendship.

The tense thriller, which debuted last night at Fantastic Fest, follows Bobby (Lonnie Chavis, This Is Us) as he tries to rescue his best pal, Kevin (Ezra Dewey, Criminal Minds: Beyond Borders) from the adults who stole them both, left Bobby to suffocate in the trunk of a car, and have chained Kevin up a hidden room.

The bond in front of the camera – who have that kind of hell-or-high-water commitment that can only come when you're 12 and your best friend is the rock in your life – is matched behind the camera by the lifelong friendship of writer/directors David Charbonier and Justin Powell. "I have two sisters," said Powell, "but David's essentially the brother that's not biological."

Pals since they were younger than their stars, they're now part of the wave of directing duos who split duties. Often they're siblings, such as the the Russo brothers (Avengers: Endgame, the Soska twins (American Mary), or the Safdie brothers (Uncut Gems, but increasingly it's just about collaboration, as in the cases of Miller and Lord (The Lego Movie), Ryan Fleck and Anna Boden (Captain Marvel), and Justin Benson and Aaron Moorhead (the upcoming Synchronic) Charbonnier said, "I'm actually surprised it's not more common, because making a movie, with so many moving parts. Luckily, Jason and I have been friends our whole lives, ever since kindergarten, and because we have such a strong friendship and bond and understanding, it's really fluid."

So who's the Bobby, and who's the Kevin in their friendship? Powell had no doubt. "David is more Bobby-like, because he claims that he would have run back in the house for me, and I say that I feel like I would have been useless and just run to get help." 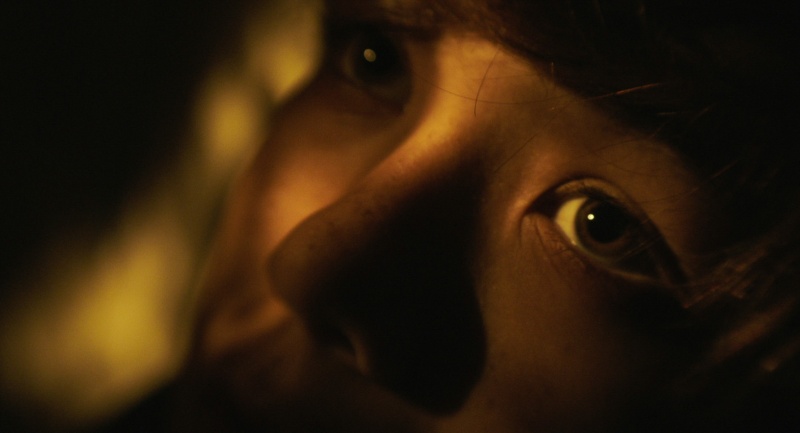 Ezra Dewey as Kevin in The Boy Behind the Door

Austin Chronicle: This is definitely a film that puts the kids through the ringer.

Justin Powell: We love kids in peril in movies - which is a terribly thing to say. But we really do feel like, as an audience, when we're watching kids in peril we're always on the edge of our seats., and clutching onto our arm rests. "Oh my god, what's going to happen?" They're always the underdogs, so you're always going to get this inherent connection to them.

That was something important to us. We were inspired by Childs Play and even Jurassic Park: Lex and Tim, they were the ones we were always nervous for, growing up. So that is where our love for having kids in peril comes from.

In terms of the story itself, that's kind of weird. The way that David and I work, we think of a lot of concepts, bouncing back and forth for a while, and this one finally landed. We started looking more into child abductions, and it kind of solidified the direction we wanted to go - but always being cognizant of not going too overboard or too exploitative.

AC: It's almost like The People Under the Stairs with all the weirdness stripped away, so it's just what it's like to be a kid in peril. You feel like you're completely out of control.

David Charbonier: It was always really important for these kids to feel like real kids. We didn't want them to feel John McLane 12-year-old boys. When, one of them gets hurt, it has to have consequences that play out of for the rest of the movie for them, and I think that helps with the sense that we wanted the film to feel grounded and realistic. We did push the boys to an extreme in a physical sense with some of the action that they have to do action, but it was really in service to, how far would you go and how much would you fight to actually survive?

AC: When you're working with kids and putting them into narratives that are pretty bleak, how did you work with them on the material? How do you explain an R-rating to a kid who won't see the film for another six or seven years?

JP: The way that we handled that was acknowledging in our heads, what do they need to know to know to get into the space that the characters need to be. Fortunately, since they are such talented kids they are able to tap into something that I don't understand where they can reach these dark places without needing to know what all this actually means. We were able to approach it from the prospective of, this is someone who wants to hurt you without getting into the details. They're so adept at taking a simple note and running with it

Beyond that, we were able to keep the set really fun and light, because they're just really fun kids. When you meet Lonnie and Ezra, they're just everyday kids. Between tapes, they'd be going around, playing with dart guns. That really helped from the directing standpoint, because we never wanted to broach those subjects.

AC: The house is incredible, by the way. It's like this Midwest Gothic mansion in the middle of the California oil patch.

DC: From a story standpoint, location is everything to us, so it is a big component, and it is really the only location.

It was not an easy house to find. We didn't want it to feel like California. We're from the Midwest, we both grew up in Michigan, so a lot of the stories we like to tell have that Midwest, East Coast vibe to them.

Initially, we did look in places like new York. We spent a long time searching on and found a great location there, as Justin recently reminded me, but for logistical reasons we had to shoot in California. Interestingly enough, the house is located in the Culver area.

DC: Just randomly plotted down there, surrounded by these oil fields. When we found it, we were just like, "Wait, this is in California?" Because it doesn't feel like California. So we just reshaped the script to be really tailored to where each room is, where each character moves through.

JP: We always wanted the house to be one of the main characters of the movie. There are so many obstacles that it presents in and of itself. And once we lost the one in New York that we loved, we were so happy that we were happy to find these one locally.

AC: What was so special about that New York house?

JP: It very much fit the way the script was originally written. It was just weird: We had written the script, not having seen a house, and it's like, "Have we been here before? This is the script." if anything it had a couple of extra rooms, and it gave us a new way for Bobby to make it into the house. That was only in it because of the house in New York.

The Boy Behind the Door U.S. Premiere at a Celebration of Fantastic Fest, Sun. Sept. 27, 8pm.