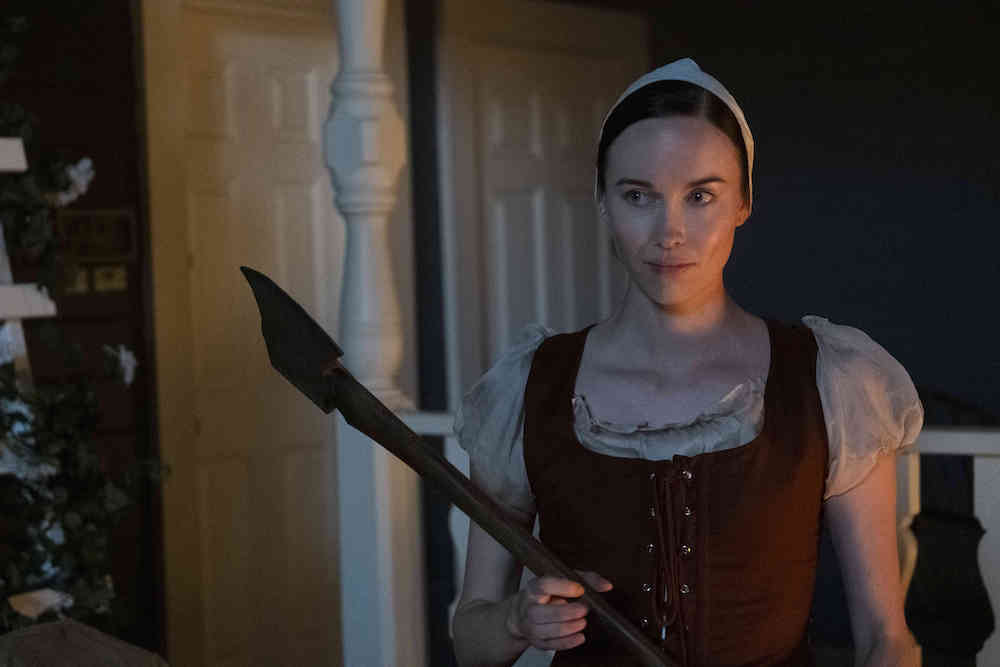 As holidays go, Thanksgiving will always be on a lower tier, defined by travel and tryptophan – plus it doesn't really have a great movie*. Pilgrim may not be the one to finally knock the Macy's Parade off the most-watched slot, but it's at least more fun than airport delays.

It's part of Blumhouse's holiday-themed anthology series Into the Dark. which has looped around the calendar for a second season. The show's first take at Thanksgiving, Flesh & Blood, was only coincidentally about Turkey Day, but Pilgrim has all the dressings. Dinner, dysfunctional families, and lessons about how awful the first settlers at Plymouth Rock were.

Blame suburban second wife Anna (Courtney Henggeler), who is so desperate to bind her family - disinterested workaholic husband dad Shane (Kerr Smith), cheerful son Tate (Antonio Raul Corbo), and sullen stepdaughter Cody (Reign Edwards) - together that she hires Pilgrim reenactor Ethan (Peter Giles) to join them for the feast and teach them the true meaning of thanks. He's eager to help and as a special bonus he's brought another fake settler, Patience (Elyse Levesque), along to aid with the feast. And they are dedicated to authenticity: pick the berries, churn the butter, beat transgressors with sticks, load scolds onto the ducking stool - and always, always being thankful.

Based (very loosely) on a bizarre real Thanksgiving experience that coscripter Noah Feinberg endured as a chid, it's tough to work out exactly what Pilgrim is getting at. As a metaphor, it's kind of a mess. "Don't invite Pilgrims over for Thanksgiving" is a little obvious at this point, while the emerging theme of "Careful what you wish for" got covered with about as much nuance in the Wishmaster films. Maybe it's as simple as "Historical re-enactors are weird," and having known some Viking recreators and Civil War nuts (both American and English) I can attest that's not terrible advice. Whatever the message, it's muddied by the family not being the most empathy-inducing of characters. Anna's irksome, Shane is detached from proceedings, while Cody – supposedly our window in to the accelerating chaos – is reduced to eye rolling and exchanging suspicious glances with Ethan.

As co-writer of the middle phase of the Saw films, director Marcus Dunstan has done much better work in dissecting a twisted mind and making the deviant explicable. So it's all the more disappointing that the fumblings towards explaining Ethan's cult-like hold over his congregation seem like a mechanism rather than a character point.

Where Pilgrim does work is as a nasty, sloppy slice of occasionally gory fun, chock-full of purposefully silly chills and ridiculous shocks. There are moments that verge on pastiche, and Dunstan et al aren't afraid to look wild-eyed and deranged.

What really pushes this into entertainingly watchable are Giles and Levesque as the problematic Pilgrims. Ethan's always trying to keep his craziness tamped under a layer of civility, and Giles keeps him stretched like canvas, barely capable of holding his flood of emotions in check. When the rupture finally comes, it's less an act of messianic mania, and more one of relief - a bold choice, but one that really pays off.

But it's Levesque who seals the deal. Patience is the truest of true believers, a glassy-eyed thousand yard stare in human form. Levesque makes her so controlled yet so unhinged that the audience will lean back from the screen but never look away from her.

* Yes, Planes, Trains and Automobiles is a great movie, but most people think it's set at Christmas.

Into the Dark: Pilgrim