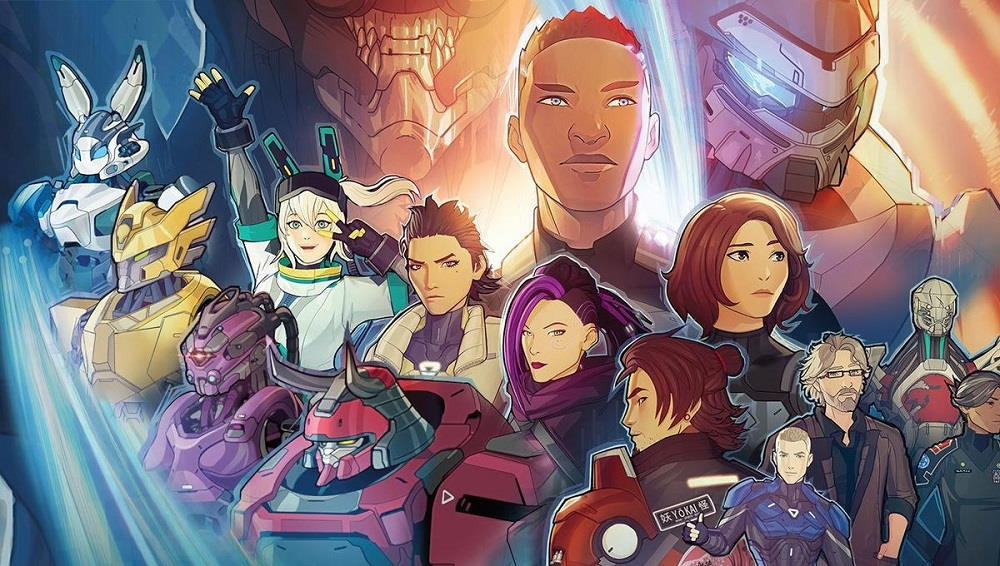 gen:LOCK, the fighting mecha series from Austin's Rooster Teeth Animation, uses diversity and representation as more than just a selling point. According to Collin Kelly, who will write the spin-off title for DC Comics, "It's baked into the property."

How can a show created by a bunch of self-described straight white dudes ensure that it builds diversity and representation into its structure? In the case of gen:LOCK, the latest series from Austin's Rooster Teeth studio, it's by taking time, making the effort, and asking the right people the right questions.

The question of representation and diversity came up repeatedly during RTX, Rooster Teeth's conference/festival last weekend, in particular reference to gen:LOCK, a sci-fi dystopia in which a team piloting giant robots defend the future. Traditionally, such teams would have been four white guys and one token woman, but in gen:LOCK, it's two women (one Scottish, one Iranian), two men (one Japanese, one African-American), and one gender fluid character.

The production team explained that the first finalized character design was Cammie (voiced by Game of Thrones' Maisie Williams), a Scottish teen. The logic was simple: in age and personality, she was closest to the kind of character that would be found in their other big series, RWBY, and so the easiest on-ramp. She was initially designed using the same production tools as that show, but with a distinctive look that could be used to extrapolate what gen:LOCK's design esthetic would become.

This is where asking questions became essential. For example, the team did a first pass on Kazu Iida (voiced by Kōichi Yamadera), but then sent that over to their contacts at Warner Bros. Japan (who have overseen the Japanese release of RWBY) for feedback, and altered the design appropriately.

It was a similar story when it came to how series producer Miles Luna voiced the part of Miguel 'Migas' Garza. While Latino himself, he was very aware of a certain responsibility in working on the part – and he even admitted to overshooting the mark, and eventually pulled back from a heavier, more stereotypical accent to an East Texas Latino one.

In that vein, the team brought in Austin-based writer Evan Narcisse (Rise of the Black Panther) as part of the writers room, and that was important for the development of a core character: Julian Chase (voiced by Michael B. Jordan). For Narcisse, what appealed to him about the show was what he called "a fusion of different cultural sensibilities," and he noted that his favorite scene with Chase was a simple family dinner, because that's what really spoke to the essence of the man. What was important about Chase is that the show puts an African American man as the lead, and that who he is informs and defines the character without that being what the show was about.

However, one of the most significant characters in gen:LOCK when it comes to diversity and representation is former Russian special forces operative Valentina “Val” Romanyszyn, as voiced by nonbinary actor Asia Kate Dillon (Orange is the New Black). Romanyszyn was written as gender fluid, and while they are written as feminine-presenting in the show, they have altered their gender performance several times previously (and their avatar in the Ether, the show's VR environment, is the masculine-presenting Val).

Lead Producer Sean Murphy explained that, early in the casting process, they had approached Tatiana Maslany, star of Orphan Black. In that show, Maslany had played multiple clones of the same character - including one who was lesbian, and another who was a trans man. Maslany has since said that, while the character of Tony Sawicki was written with the best of intentions, she believes that trans actors should play trans parts, and that's what she told Rooster Teeth. It was her decision not to take the part, and her encouragement to look to trans actors was what lead them to Dillon.

That urge to ensure accurate representation was also a factor when looking for a creative team for the upcoming gen:LOCK comic. Rooster Teeth's Animation Brand Manager Christine Brent admitted that when she first met the writing team of Justin Lanzing and Collin Kelly, she stopped them mid-pitch. She recalled challenging them, "There's no easy way to ask this – are you going to write Val the way they need to be?"

However, Lanzing explained that "Val was one of the main selling points for us." During their tenure at DC, he added, "The only time we have written about somebody who looks like us is [an established character] like Olly Queen." Throughout their career, they had spent a lot of time trying to get diversity into their comics and show pitches, and spend a frustrating amount of time in meetings breaking down terms like gender fluid for executives.

That wasn't the situation with gen:LOCK. When it comes to diversity and representation, Kelly said, "It's baked into the property."