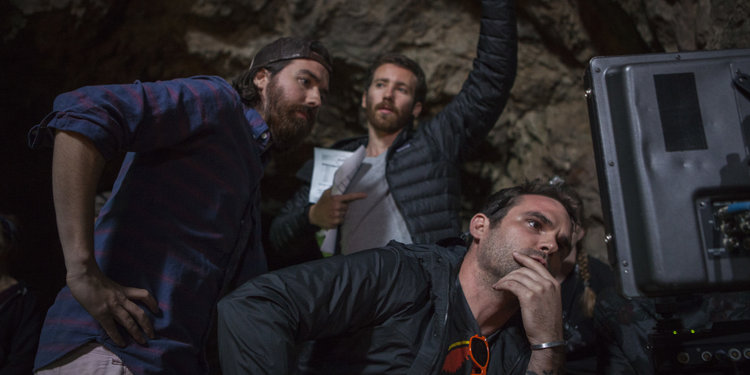 It used to be that, if someone was out of contact for a few days, or weeks, or even months, you just presumed they were traveling or having fun. But when Austin filmmaker Mark Dennis travelled to the South Pole, it became the root of his new science fiction film Time Trap.

His four-year-long adventure would make a movie in its own right: A plan to reach the bottom of the world and back by surface travel (by bike from Texas to Argentina, a boat around the Darién Gap, hitchhiking to Tierra del Fuego, a ship to Antartica, then a bus back), a scheme scuppered only by getting deported from Ecuador on the return leg. Dennis said, "I came back, and all my friends were older. They had kids. Everybody I knew was in a different life, and part of where this came from is coming back and realizing I didn't fit in anywhere any more. ... They moved on, and I'm still the same person with a bunch of new experiences."

The result was Austin-made Time Trap, a sci-fi movie that avoids all the pitfalls of cinematic temporal mechanics, of cause-and-effect and predestination, by having the characters effectively fall out of time. Once they enter a mysterious cave in the Texas Hill Country, it slows to a crawl for them: Or, relativistically speaking, it proceeds as normal for them, but accelerates outside of the rock. However, Dennis and his co-writer/director Ben Foster still kept a rigorous eye on the clock. "Mechanically, I think, it works," said Foster. "The count on the days all works."

So while Time Trap aims to be as chronologically correct as Primer (still the ne plus ultra of hard sci-fi time travel movies) the pair pitch the action as closer to the action-adventure appeal of Back to the Future, "For a while," Dennis said, "I wanted to call it Backpack to the Future" Austin Chronicle: This film's very reminiscent of The Signal, in that it hides exactly what kind of genre film it is, and reveals itself progressively.

Ben Foster: I was at its Sundance premiere. They went as far as they could with their reveal, and we kind of end up in a similar place. When [The Signal] starts, you're with these kids, and they're at a rest stop and they're arguing, and then they're in space. We were just talking about that, about movies that at the midpoint turn into something completely different.

AC: So, who's idea was it to shoot in a cave, which seems like it could be a recipe for filmmaking stress and trouble?

Mark Dennis: It was just the coolest place to make a movie where people go into a location, and when they come out of it they've been propelled into the future without their knowledge. It's also easy to get stuck inside of a cave. Also ,The Descent is one of my favorite horror movies, and I just liked the idea of having people trapped in a location like that.

BF: It was a nightmare. All the batteries died because of the moisture. We had to replace all kinds of stuff. We couldn't communicate with the surface. We had to send runners, so it was just constant waiting on somebody or something. And nobody took that into account when we planned our days, so every day piled onto the next day, so we'd shoot without props because we didn't want to wait 20 minutes, and then we'd rewrite so we didn't need props the next day.

Luckily, in that first phase, we shot in order. Can you imagine if we'd shot out of order? Some of it was, but a lot of it was sequential, so we weren't totally fucked if something changed on the day.

AC: How do you even scout cave locations? Because there's going to be that balance between looking great and being practical.

MD: It definitely changed the script based on the cave, because we had to find a cave we could shoot in. It was kind of weird to write a movie about a cave and just assume that we could find a cave that we shoot in, and it would suit every single scene.

The first thing we did was post on our Facebook, and ask if anyone had a cave that they had access to that we could shoot in. Ben's mom found some guy that Ben's friends with in the North Austin-Round Rock area that has a cave on his property, and we shot most of it there.

BF: And it was the perfect cave, because it's about some people who are looking up and out, and they can see the sky, and the sun going by because time's passing, but they can't get up there. This cave, we walked into it and went, "Holy shit, this has the room that we need." We added to it, made it taller, more of a chimenea that they have to climb out of, but it had the pieces that we needed.

MD: All we had to do was build it up higher and build a boulder for them to stand on, but everything else was already there.

BF: So we built sets in the cave, which was a whole other layer of dumb ideas.

AC: Austin's one of the very few towns where, because of all the limestone, it's easier to find a cave to shoot in than a house with a basement.

BF: Funny you should say that. I just bought one.

BF: Yeah. I have a guy who was coming to redo our floors, and I told him on the phone, "Yeah, I want to redo my basement." He said, "I'm in Austin." "Yeah." "Texas." I'm like, "Yeah, I know, but I have a basement." He goes, "That's weird," and it's actually a bomb shelter. It was built in 1962. It was at the height of the Cuban Missile Crisis, and the people were just like, "We need a bomb shelter," and they built it. It has an escape hatch that you have to dig out, and a ventilation system.

MD: Our first movie had a basement.

BF: Oh yeah, Tim and Karrie League have a basement. We shot in their basement. So basements are a thing in my life. I never realized that.

Time Trap is screening in Austin this Friday and Saturday at the Alamo Mueller with director Ben Foster in attendance on Friday, and arrives on VOD on Nov. 13. For review and showtimes, see our listings page.