Heading Down to Rock Steady Row 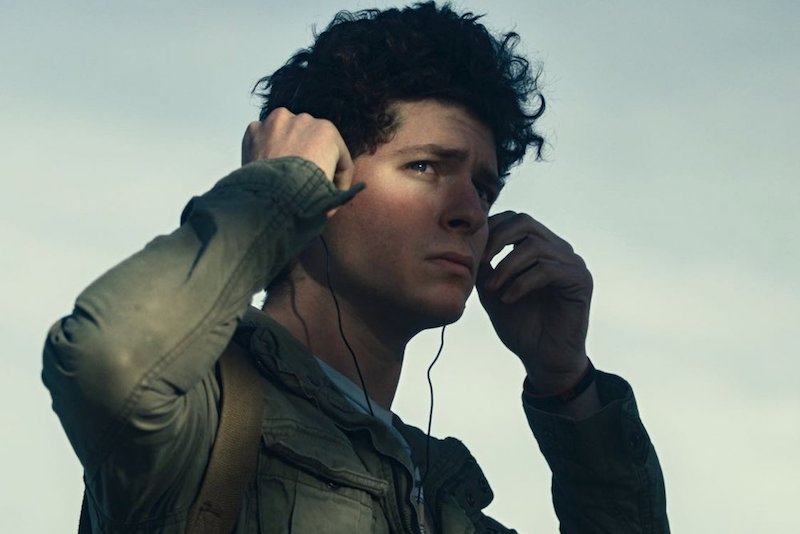 Ever suspected that college is hell? Well, in Trevor Stevens’ madcap campus satire Rock Steady Row, it’s not quite the inferno, but it’s definitely a wasteland where you can’t trust anyone.

Equal parts Animal House, The Good, The Bad, and the Ugly, and Yojimbo, the film gets its Texas premiere tonight as part of the Other Worlds Austin year-round programming. Stevens said, "When we explain the film, there's one of two reactions. People are like, 'Huh,' or they go, 'Ah, I get exactly what you're talking about."

Think of it this way: the whole point of post-Apocalyptic drama is that there’s a scarce asset. Whether it’s food (Soylent Green, A Boy and His Dog), medicine (Contagion) or water (The Last Survivors), there’s something everybody needs, and they’ll do anything to get. Or take the world of Mad Max, where it’s gas - or rather, the speed and mobility that gas provides. In college, that liberty is bikes (after all, no one wants to walk across campus). So when someone makes off with the carbon-framed love of a mysterious freshman (Heston Horwin), he goes full Lee Marvin in Point Blank to get it back.

In the vein of original Drafthouse Films release The FP, and I Declare War, Rock Steady Row is a completely innovative remix of disparate genres, so we talked to Stevens about his unique look at the college experience.

Austin Chronicle: There's a lot of Yojimbo in here, but also A Fistful of Dollars, Red Harvest, Dashiell Hammett's novel that influenced Yojimbo, and Last Man Standing, the Bruce Willis/Walter Hill version. They're all the same story, but so tonally different, as is this. Rock Steady Row is one of those films that you go, 'I've got an idea,' and then you wake up the next day and say, 'There's no way anyone will let me make this.'

This was an idea I had right after college. This was sparking, fusing with so much early, naive energy of my earliest ambitions and inspirations, including Sergio Leone. I had this tickle of an idea: You've seen the film noir in high school with Brick, but I haven't seen college tackled in a way other than the very typical tropes, where it's the fraternity parties, and the DVD cover has a pair of boobs, the Van Wilder story. I haven't seen college caught in a way that spreads it into a different genre, past low-brow boob humor and semi-dramas. We saw an opportunity to spin it on its head.

We loved Yojimbo, A Fistful of Dollars. They were something me and my writer (Bomani Story) grew up watching, and Spaghetti Westerns were huge staples for us. ... I enjoy particular Westerns, but especially Spaghetti Westerns, because they were tackling a genre that had got a little bit tired, and brought a whole new fusion. It didn't focus on the gun battle, it focused on the moments before a gun battle, and all these intricate details of someone out of their element from another part of the world coming into the American Frontier.

We always wanted to do that in a unique setting - not just do it in the West, but take the soul and the vibrancy of a Spaghetti Western or a samurai film, and put it into a different setting, and the college setting was perfect.

“OK, you have your ronin or your gunslinger. Boom, college freshman comes into town. Instead of a gun, he’s armed with a Walkman, and instead of the two warring gangs, you have two warring fraternities.”
We kind of knew this was a rainy day idea. I personally didn't think anyone in their right mind would ever throw money towards this. In my mind I was just like, no. If it happened to be that we ever have the opportunity to have our own money to spend on something, we'd do it as our own project.

I had the mentality of pitching other projects that were a lot simpler, like putting one person in a room, and it happened to be that we had a meeting set up where they asked us what ideas we're pitching out. I don't know what inspired me, but I was just like, fuck it, I have all these other ideas in my pocket, but lemme tell you about this one. Their eyes lit up, their ears perked, and we walked out of there and we were given money to make this a reality.

We walked out, and I was scratching my head going, 'How the fuck did that happen?'

AC: What was the moment when you knew you'd convinced them?

Once I had made these translations, it was very clear not just why it was funny, but why it was relevant, why this made sense in today's world.

AC: It's an overdue fusion, since the Western and the college movie are very American genres. Like most college films are about fraternities, which only exist in America, and you use them here to stand in for the gangs in A Fistful of Dollars.

TS: When you're tackling college, there's two ways to go about it. There's a way of doing college where you treat it real, but for people that have ever been through it or still have college debt, I don't think they want to see that so much. The benefit of us as entertainers is being able to spoof things a little bit.We can still have a serious heart, and address things a little bit, and have a serious conversation about them, but I think we want to bring them to the surface in a different way. Q&A: It Came From the Desert
Monster-sized insect movie gets its Texas premiere