Don Hertzfeldt and His “World of Tomorrow”

The mind of Don Hertzfeldt is a sublime – possibly unknowable – place. Sometime in the far-flung future, mad scientists and robot neurologists will extract Don Prime’s cerebrum in a vain attempt to discover the source of his genius. Surely, with so many Oscars and Palme d’Or’s to the artist’s credit, some sort of creative anomaly will be present. 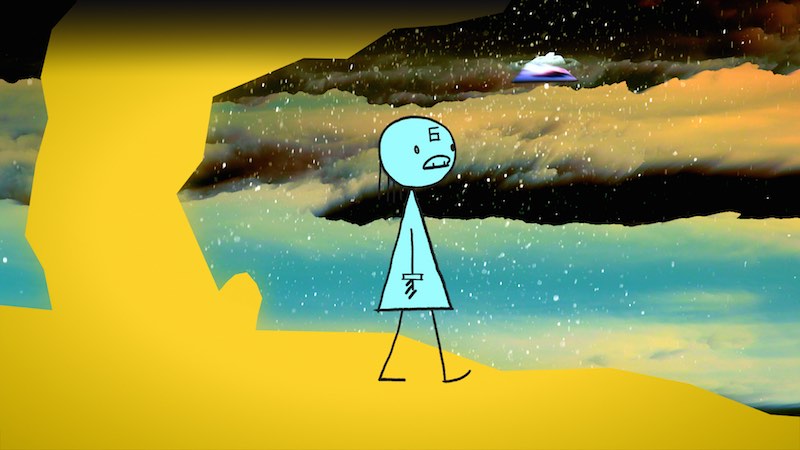 Still from "World of Tomorrow Episode Two: The Burden of Other People’s Thoughts" (Images courtesy of Bitter Films)

As corpus Hertzfeldt is thawed and the brain removed with great care, there will be gasps, the fainting of orderlies – hence the chaise longues ringing the operating theatre – and a dazzling white light reminiscent of the briefcase scenes in Pulp Fiction and, more ominously, director Robert Aldrich’s Kiss Me Deadly, will emanate from the Don-head. Astonishment ensues.

Later on, wild rumors will run rampant, with one attending Medbot misquoting Robert Oppenheimer: “Now I am become life, the creator of worlds.” Across the globe, the moon will rise Day-Glo pink, the sun obsidian black. Reports will begin to filter in of Camponotus ligniperda – the common carpenter ant – constructing vast, Brobdingnagian effigies of The Great Man in tropical Nepal, the Hindu Kush, and throughout the balmy polar jungles. Nothing will ever be the same.

Or so I imagine.

The Austin-based filmmaker premiered “World of Tomorrow Episode Two: The Burden of Other People’s Thoughts” at Fantastic Fest 2017, but if you missed that, you’re in luck. Hertzfeldt will be screening his magnum opus, alongside its predecessor, "World of Tomorrow," for two screenings this Tuesday, for one night only at the Alamo Drafthouse South Lamar. Double-mortgage your house, divorce your spouse, sell your dreams down the river: whatever it takes to catch this historic cinéma fantastique event.

The Austin Chronicle had a chance to talk with Hertzfeldt via email recently and per his request, we’ve neither changed a word nor paraphrased his responses. [Editor’s Note: I added some commas.]

Austin Chronicle: Did you originally plan on making a sequel to “World of Tomorrow”? It certainly feels very organic and a natural progression from the first film.

Don Hertzfeldt: When I recorded my niece for “World of Tomorrow” at age 4, I had no idea what I was going to get. I wasn't even sure if I’d come away with any clean audio. And the movie sort of wound up being shaped around a lot of the unexpected stuff she said. A year later, and about a month before it premiered, I saw my niece again and decided to try another round of audio recordings. I didn't really have much planned at that point for another episode but I only get to see her once a year, so I figured I should hit record again, just to see if it might spark something.

And it actually sort of didn't spark anything. Where age 4 was this age of reserved wonder, age 5 was an age of nonstop, manic imagination. It was wonderful stuff but everything she said was all over the map and didn't connect in any way to my early ideas. It was a big mess. Returning to Austin, I was actually kind of discouraged by the new sessions. If in the first film she'd sort of been an improvisational actress that I could nimbly edit around, this time she was more like a rambling co-writer who gave me piles of strange stuff that I had no choice but to find a way to use.

AC: Both films grapple with issues of identity and the loss thereof, mortality and how people do or don’t cope with the prospect of imminent oblivion, and the longing for human connection. Both films are brilliant and jam-packed with deep philosophical observations leavened by the comic dichotomy of Emily Prime and her clone(s). How did we get from [Hertzfeldt’s first short animation] “Billy’s Balloon” to here? Obviously there’s a trajectory, but the mind reels at how profound your “World of Tomorrow” films are.

DH: Ha! Thanks, but I think it's easy to forget that those older ones were student films produced by a teenager who was making it up as he goes along. I guess I’m still making it up as I go along, but animation is sort of funny and strange in that way, in its timelessness. I like “Billy's Balloon,” but it was almost 20 years ago. The awkward student films of most live-action directors you almost never hear about, they're mostly vanished and anonymous works. But my own awkward student stuff never seems to want to go away. I’m grateful they're not embarrassing or anything, but it always sort of feels like someone pointing to your childhood scribbles and saying, “I prefer his earlier, funnier work." 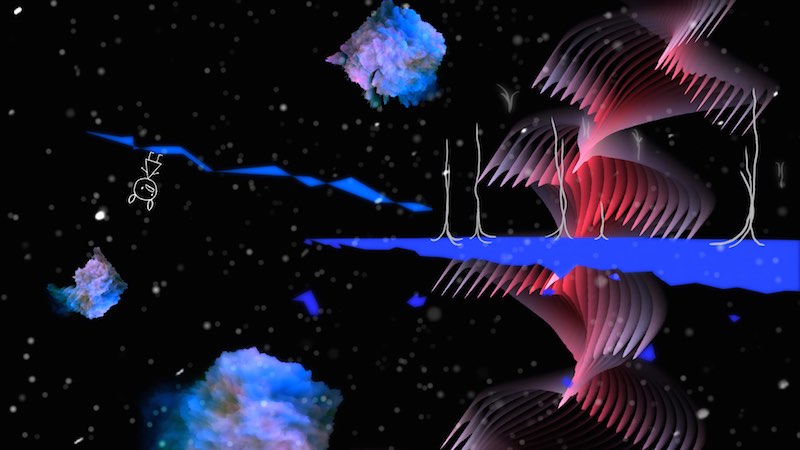 AC: What is science fiction today is increasingly science fact tomorrow. For example, Elon Musk’s mission to Mars, driverless cars, Amazon drone delivery, CRISPR, and clones. What are your thoughts on the current and future states of our digital lives versus our “real” lives?

DH: Well, the more time you put into your digital life means the less time you put into your "real" life. It's easy to see that compromise shows up all over the place [whether it’s] somebody ignoring a date to look at Instagram or crowds of people holding up their phones to record a concert. You only get to do one or the other. I’ve had to stop looking at social media altogether. I can't handle it. My friends know who they are. I don't want to nose through their photo albums or know what they ate today. I just don't care. I truly don't care. I love my friends, but I don't need to know that stuff. Who needs to know that stuff? Tell me about it later if something important happened. An overwhelming social media feed, that stream of activity waiting for you if you haven't logged in for days, to me that's the "burden of other people's thoughts."

AC: Talk about the importance of independent filmmakers like yourself versus mega-budgeted Hollywood fare from, for instance, Disney/Pixar? If John Lasseter called and told you he wanted you as part of his creative team, would you take him up on the offer? Please answer “no” or “only if I’m guaranteed total creative control and final cut.”

DH: I’ve always thought there are just as many horrible indie films being made as horrible big studio films. They're just horrible on a different budget. But the one thing I’ve always held onto as an independent is absolute, total control. I own everything, I can work alone on my own schedule, and I can finance everything by myself. That is enormous. Enormous! Weirdly, the more powerful you become as a filmmaker and the higher you climb on the Hollywood ladder, you will probably never again have the same amount of control as you had when you were a nobody starting out. The only thing you will get more of is money. As the budgets get bigger, you're probably not going to be able to cast the people you want, you probably won't have final cut, you probably won't be able to begin shooting with a finished script, and you probably won't feel like you finished a movie so much as you reached an arbitrary date where someone takes it from you and releases it. The old-school, all-powerful, big-budget Hollywood director seems to be a dying breed. There are maybe a half-dozen of those guys left who can do absolutely anything they want to. Most everyone else has less creative control than a student filmmaker down the street shooting in a garage. They just make a lot more money.

AC: I would be remiss in not bringing up The Simpsons couch gag you did in 2014, which is by far the coolest 126 seconds in that extremely cool show’s history. How did that happen?

DH: Thanks! They said hello out of the blue and simply asked if I’d like to do something. That was three years ago now and I’ve still not met any of them, that's how hands-off and trusting they were in the process. The entire piece was produced here in Austin, just as though it were another short film of mine. It was kind of funny, the first few times I drew the Squid Homer it looked pretty good without needing much fixing. And I was surprised by that for a second before I remembered, "Oh yeah, I used to draw Homer endlessly when I was 13." I watched probably every episode of the show from the very beginning until the time I went off to college and didn't have a TV. So it all felt weirdly second nature to animate, like riding a bicycle.

AC: Is there anything else you’d like to add?

DH: I’m kicking off a small winter tour in support of “World of Tomorrow Episode Two,” and it all starts in Austin and then Dallas before I head to the coasts. I used to tour quite a bit in the past, but I don't think I’ve ever felt this excited or confident before in what we're going to show. Most of this program nobody's ever seen on the big screen before. It always feels like giving someone a present that you spent a very long time working on. You can't wait to see them open it.

Join Don Hertzfeldt as he screens his “World of Tomorrow” films plus some surprises, Tue., Nov., 28, 7 & 9:15pm, at the Alamo South Lamar. Secure your tickets at drafthouse.com. For all things Don Hertzfeldt, and to see the additional stops on his winter tour, visit www.bitterfilms.com. 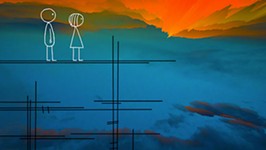