The "World of Tomorrow" is here today 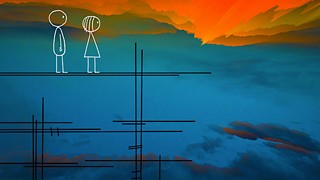 Confession: Austin-based animator Don Hertzfeldt is, hands-down, my favorite living animator. Not because his multi-award-winning, Oscar-nominated, hand-drawn and 35mm, single-shot-animated shorts make me laugh out loud (although they frequently do), but because they so perfectly capture the tortured, insecure, and often outright terrifying pop-cultural angst-chaos inside my own head – and by extension the heads of so many of us who are frantically trying, and seemingly failing, to keep up with the frenzied revolutions of modern life. That Buñuel, Dalí, and Jan Svankmajer would dig the manic panic at the heart of Hertzfeldt's sad-funny stories is a given.

Hertzfeldt's most recent animated short, "World of Tomorrow," has just been released online after nabbing the Grand Jury Prize for Short Film at Sundance 2015 and winning the Best Animated Short category at SXSW 2015, among other kudos. The sans-sangfroid story remains similar to the animator's past thematic thrust: A little girl (voiced by the animator's 4-year-old niece) is visited by a future, cloned version of herself, who then spells out the depressing horrors of what's in store for humanity. But what marks this Hertzfeldt work as a major artistic turning point is that it's his first 100% digital creation, no rostrum camera necessary.

So does that mean he now has to stash his hard drives in a fireproof safe, as he famously did with thousands of pages of his hand-drawn animations years ago? 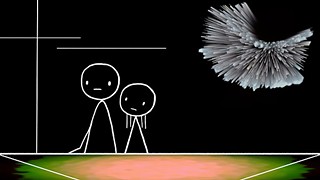 "I did have to actually think about that for the first time while working on 'World of Tomorrow,'" says Hertzfeldt, "the idea of getting a backup drive for the backup drive for the backup drive. But this is something I've been thinking about a lot lately. I'm a little scared of digital film in general for just that reason, for storage, for archival stuff. The film prints we can stash away and we know they last 100 years, at least, but with the digital stuff we have no real idea if they'll be readable in just a generation."

Granted, as anyone who's even the least bit familiar with Hertzfeldt's body of work already knows, this is a filmmaker whose entire aesthetic is intrinsically bound to anxiety, worry, and fear, albeit in a darkly whimsical, occasionally Dadaist fashion. But his concern for the future life of contemporary indie cinema is still rooted in a genuinely problematic situation.

"When you think back to the silent-film days, they say that something like 90 percent of all silent films are lost to us because they weren't archived. They weren't thought of as art or as being valuable. I feel that in another generation's time we're going to have this massive empty spot where all of these Sundance and South by indie films that didn't break through or that didn't get archived by a studio somewhere will just be gone. Because inevitably – and I'm thinking of my own stuff now – I'm going to be dead, and my family's going to have that backup drive of the backup drive, and at some point someone's going to screw up, right? The drive will be lost and that film will be gone ... forever."

It's comforting to know, then, that the film negatives for all of Hertzfeldt's older, hand-animated films are safely locked away in the vault at the George Eastman House in Rochester, N.Y., where they will be preserved, presumably, in perpetuity. Not so, though, with his (or anybody else's) digital work.

"We have such a plastic society now," says Hertzfeldt. "But I was curious about [doing an all-digital animation]. I have some friends who are illustrators who can't stand drawing on a tablet because they miss the friction of paper. That wasn't a problem for me. ['World of Tomorrow'] is 100 percent Photoshop, Final Cut, and ProTools for sound. And that's it."

"World of Tomorrow" is available on Vimeo on Demand or can be accessed via the link on Hertzfeldt's website: www.bitterfilms.com.