DVDanger: Ryan Reynolds, the Most Interesting Man in the World

If Ryan Reynolds were the actor everyone thinks he is, he would take easy scripts, flash that million-dollar Canadian smile, then head home to sleep on a pile of cash. He could be the Chevy Chase no one wants to throttle. Instead, he's a less spiky Bill Murray. 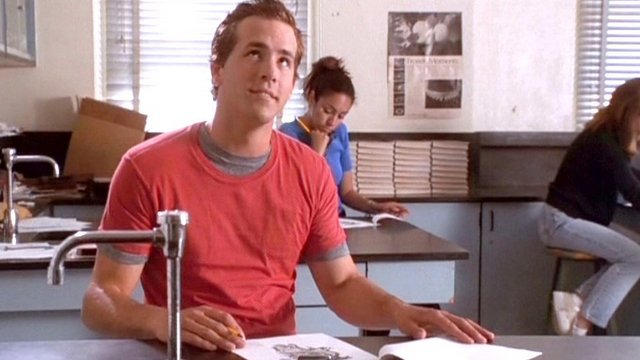 Set aside the big budget tent-pole titles, Reynolds has always been an actor that, when you'd expect him to break right, he'll always take a sharp left, then finds some weird scenic route you never knew existed. That's why, for every Blade: Trinity, there's something more creatively ambitious, like The Nines, or Buried. At his best, he either dismantles a paradigm, or embraces it so graciously that he makes it plausible. It all comes back to the fact that he looks like he should be a leading man, the straight-ahead hero type. When he's forced into that mold, as in, say Green Lantern, it never works. It's too obvious. In his breakout role, Van Wilder, he flipped the equation straight out of the gate, playing a character so inherently loathsome that it strained against the furthest limitations of that likability.

Yes, Fox will never be excused for teasing us in X-Men Origins: Wolverine with a dash of Reynolds as Deadpool, the merc with the mouth. That is, until we get the full film version, in all its fourth-wall-busting majesty. It's the most unpredictable and challenging comic adaptation since Howard the Duck, but with Reynolds under the mask, there's a comfortable feeling he'll stick the landing.

Reynolds embraces weirdness with an earnestness, either through annihilating the fourth wall, or conveying the sense of disorientation that a real person would experience when facing cinema logic. Behind the abs, there's a graceless angularity to the man, a feeling that all the style and charm is held together with sheer determination. That's why he could convey the emotional awkwardness required to raise the slack comedy of The Proposal, or carry the sudden third-act moral quandary of screwball action flick Smoking Aces. That's why he can let the facade slip so distressingly in the latest creation of the king of subversive sexual cinema, Atom Egoyan. 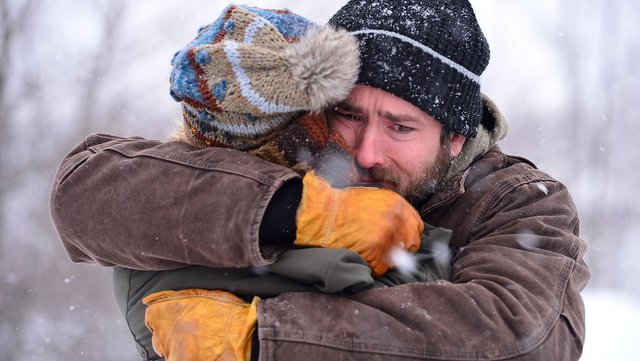 The Captive sees Egoyan head further into noir country, and it's easy to see why Reynolds would be attracted to the contrarian director. After all, no one makes as many films about sex without showing sex as Egoyan, and that's a necessary skill here, since a core component of the plot is a pedophile network. It's a dark evolution for Egoyan. He has regularly made sex workers core characters in his work, and sexual betrayal and erotic politics have long been his stock-in-trade. More recently, he has added a detective's flair to the equation, with Devil's Knot retelling the West Memphis Three story, and an almost conventional thriller in 2005's Where the Truth Lies.

The Captive adopts the latter's switchback timeline, flipping back and forth across the years and the winters as Matthew (Reynolds), a devoted father and blue-collar landscaper, deals with the loss of his daughter. Unlike most Egoyan male protagonists, who lead with their dicks, he is guided by his shattered heart after his daughter Cass (Peyton Kennedy) is abducted from the back of his truck. Unbeknownst to him (but established for the audience in the opening moments), she was stolen away by a high-powered pedophile ring. Now she is 13 (as played by Alexia Fast, she is no longer of sexual interest to them, so she is kept in a sealed room, grooming even younger girls for them).

The trademark Egoyan queasiness is still there, especially in a sequence where the anti-pedophile unit headed by Scott Speedman and Rosario Dawson tweaks images of young girls to make them more appealing to online predators. But there is also his patient understanding of humanity under duress: no more so than when, in a moment of blind fury, Reynolds swings wildly at Speedman and connects, stunning him to the floor. There's a flash of confusion, of unwelcome power and despair in Reynolds' eyes, in the way he lets his hands go limp like a boxer throwing the fight.

One common criticism is that Egoyan's plot (co-scripted with TV scribe David Fraser) posits a grand conspiracy of influential and wealthy pederasts that can hide a child for years. Truth is, combine the Ariel Castro kidnappings, and three ongoing British police investigations – codenamed Fernbridge, Midland, and Yewtree – exploring heavily substantiated claims of sexual abuse involving high ranking politicians and famous musicians of the 1970s and 1980s – and you have the underpinnings of The Captive. That said, Egoyan cranks up his usual hurdy-gurdy ensemble storytelling more than normal. If this were a patchwork, then the stitches would be strained and showing.

But then there's Reynolds, anchoring everything, baffled that anyone could do this to his daughter. He's the father that keeps the truck from which was she was stolen like a shrine. He's the guy that picks up hitchhiking teens – not the smartest move when the cops think he killed his own kid – because he doesn't want them to be next. There's a selfless, panicked damage, a sensitivity made all the more crushing because Egoyan makes it explicit that he is not to blame (if only his contemporary Greg Arraki had shown similar restraint and clarity in the needlessly tricksy White Bird in a Blizzard).

Anna Kendrick and Ryan Reynolds on a delightful first date. Nothing can go wrong in The Voices, right?

The actor transitions from pure victim to someone with far less clean hands in The Voices. The English-language live-action debut for comic author/director Marjane Satrapi (Persepolis, Chicken With Plums), let's just say that it's not the movie the average studio would greenlight for the first pairing of Reynolds and Anna Kendrick.

There's something delightfully of another era about the pair (Satrapi even shot the U.S.-set film in Germany, resulting in a dreamlike neon quality). The pair even has an idyllic date: Kendrick, the all-American girl with the bashful eyes and supernova smile; Reynolds, lantern-jawed and soft-voiced. Of course, he has to keep her out of his apartment, since he accidentally killed a co-worker, and is storing her body in Tupperware. Oh, and he thinks his pets and her severed head (still in the fridge) talk to him.

Jerry has issues, and has trouble staying on his court-mandated meds. But why would he sedate himself into drabness? Off his medication, the world is what people mean when they say Disneyfied: bright pastels and butterflies and talking animals. There's Bosco the dog (voiced by Reynolds as a dopey Mr. Ed-style good angel on his shoulder) and Mr. Whiskers the cat (Reynolds again, adopting a malevolent Scottish brogue). Unsurprisingly, when Jerry accidentally kills for the second time (the first, when he was a child, is more of an assisted suicide), Mr. Whiskers urges him to embrace the killing instinct. He is, after all, a cat. Meanwhile, Bosco is the droopy-faced good angel on his shoulder, part Deputy Dawg, part Dug the Dog from Up. As for Jerry, you don't just want him to get caught because he's serial killer with deep and abiding mental health issues. You want him to get caught because, like Bosco says, he's actually a good boy.

The Voices is undoubtedly a pitch-black comedy, reminiscent in tone of when Billy Connelly got zombified for Fido, and as daring as recent man versus fungus head-trip Motivational Growth. Satrapi wisely hired France's leading horror cinematographer Maxime Alexandre (High Tension, The Hills Have Eyes remake) to remind audiences that, yes, this is a gruesome tale of a murderer with severe mental health issues. There are grisly contrasts to Jerry's cartoonish take on the world whenever regular people see the carnage. Then there's a deranged final act that lurches so far into Jerry's fantasy world that it will inevitably be divisive.

And who keeps this complicated balancing act on the high wire? Again, Reynolds. Just as Matthew is uncomfortable in his own adult skin, Jerry is a man-child, flopping happily one moment, awkwardly compressed and hunched over his knees like a bad kid waiting to get scolded. He defies the image of serial killers as evil geniuses with uncontrollable bloodlust, or gibbering buffoons. Instead, Jerry is a tragic figure. He's what is known as a visionary serial killer, one driven by a psychotic break, and the talking animals are pretty clear signs that something is awry. There are clear nods to the pathology of Son of Sam and Jeffrey Dahmer, but he's the kind of killer that would haunt the streets of Pleasantville, not New York or Milwaukee.

Maybe that's the trick with Reynolds. Satrapi posits a creative new world, and Reynolds populates it like a native. That's why comics fans are excited for his Deadpool in a way no one (including Reynolds) was for Green Lantern. So serial killers and grieving fathers as depicted by visionary alternative directors? This isn't a new stage in Reynolds' career. It's the Reynolds he always was.

The Captive and The Voices are both available from Lionsgate on DVD, Blu-Ray, and VOD now.