Two different historic takes on the 'squad on a mission' tale 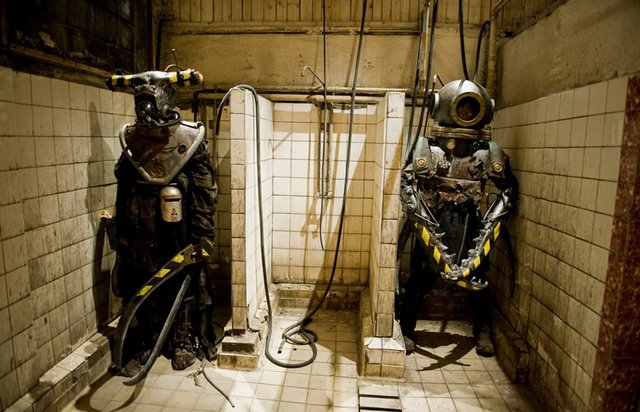 Yes dare you to use the middle stall: POV on the zombots in Frankenstein's Army

Ten-hut! War, as the saying goes, is hell. And that's why some of the most hellish horror movies go deep into its bloody roar.

Take the living dead in a combat zone. Post-Dawn of the Dead, the standard reading of zombies has been that they are a metaphor for mob rule and thoughtless action. And so it's particularly fitting that there's been a rich little sub-strain of Nazi zombie flicks.

The true classic of the genre is the gonzoid Shock Waves. More recently there have been swaztika-clad undead in the British 2008 film Outpost and 2009's Norwegian chilly gorefest Dead Snow (and its recently announced sequel.)

Frankenstein's Army (Dark Sky) is the latest tale of the revenant reich, and it may be the first found footage period piece, to boot. Towards the end of World War II, a small Russian squad is tromping towards German lines when they get called to help out a lost unit. Purely coincidentally, they are documenting their battleground trek with a radical and experimental new camera that captures both light and sound. Lucky, huh?

When they arrive at a crumbling church, they find weird, rusting machines and a lot of bodies. Unfortunately for them, it's home and laboratory for Dr Viktor Frankenstein (Karel Roden as the great-great grandson of the famous corpse tinkerer.) Those bodies are his raw materials, as he resurrects them through mad science with a few extras. This is less steampunk and more dieselpunk: his Zombots are twisted wrecking machines, as much shambling tanks as flesh-rending fiends.

So, basically, this Dutch-produced, Czech-shot mayhem entails a lot of monsters, a lot of POV running, and some splendid, gruesome kills. With his debut feature, director Richard Raaphorst hasn't really made a horror film: He's made a severely kick-ass Halloween haunted house.

Here's how haunted houses work. The trick is to get people through, get them excited, make them feel like they got their money's worth, and then get them out the door. You want to maximize scares per minute, but then get the customer moving at the right pace. That's what Frankenstein's Army does: It's 88 minutes of unique, crazy, hand-stitched monsters causing mayhem and, most importantly, flailing straight at the camera.

Richard Raaphorst's designs for Frankenstein's Army: Five will get you ten that you see something similar in a haunted house somewhere this year

That's a big part of what make Frankenstein's Army so cool. Raaphorst sunk every koruna of his budget into the costumes (as one of the actors notes in the 30 minute making-off included here, health and safety and crash mats weren't a big concern.) So when the spindly-limbed Mosquito Man or the slice-and-dice noggin on Propellorhead smash into frame, he lets them get up close and personal. Which is pretty awesome, considering how many low-budget movies do everything they can to hide the seams. Instead, Raaphorst is basically screaming, 'yes, I know this looks super cool. And check out the rust patina on the back! That tooks us forever!"

Side note: Some folks have kvetched that the experimental camera with which Stalin's assigned cinematographer Dimitri (Alexander Mercury) catches the carnage is unrealistic for the time period. To which I say, oh, of course, but welding two guys together to make a zombie cyborg with a hammerhead, that's completely in keeping with the era?

Of course, this being a movie, there still has to be at least a negligible amount of plot driving the troops deeper into the catacombs. There's a burst of character interaction between stone-faced Polish recuit Sergei (Liev Schrieber doppelganger Joshua Sausse) and Russian party loyalist Vassili (Andrei Zayats, pulling a constant furious leering weasel face.) Behind the lens, Dimitri's quest to document everuything, even at the expense of his comrades' live, is impressively sleazy. And when Roden turns up as the suitably deranged Herr Doktor, he adds a suitably dispassionate, if sickly creative, addition to the Frankenstein line. Peter Cushing (who both played Frankenstein repeatedly for Hammer and played with Nazombies himself in Shock Waves) would be proud. It's arguably familiar ground for him, since he also played Rasputin in Hellboy, so he navigates the sinister laboratory of this fictionalized World War II with ease.

But most of the rest of the cast are … do you remember the Barneys from Half Life? The disposable secondary characters that drift in and out of the plot, just long enough for you to care about them, and then they disappear or get munched? Yeah, there are a lot of Barneys in here.

In fact, thinking of Frankenstein's Army as a found footage/POV movie is almost a misdirection, because it takes a lot of beats and direction from first person shooter games. It owes a particular, spectacular and undeniable debt to one of the all time great franchises of the genre, Castle Wolfenstein, and especially 2001's Return to Castle Wolfenstein. Because, at the end of the day, who doesn't like seeing bizarro Nazi Zombies getting their comeuppance?

If any of this sounds like a negative, it's most definitely not. This is the AK-47 of horror films: You put it in anyone's hands, in any circumstances, and it will get the job done. It's basically everything you hoped the POV sequences in that shitty Doom movie were going to be, but failed so spectacularly at. The funhouse vibe means it gets away with a lot of gruesome set dressing, but without that much gore. Bar a very bloody disemboweling, some OTT brain surgery, and a lot of digital splatter on the lens, it's not overly gooey. A lot of the deaths actually take place either on the periphery of the image or just out of shot. Instead, it's a lot of practical scares (including one of the best "he's behind you!" jumps of recent years.)

Moreover, pre-carnage, Raaphorst pulls off a pretty effective squad-based war movie. With almost no dialogue, he establishes the dynamic, and the early scenes have more than a dash of the sullen despair of Band of Brothers, but on a fraction of the budget.

Speaking of muddy military endeavors on a European battlefield, there's another rain and gore soaked excursion unleashed this week with Hammer of the Gods (Magnet.) Where Frankenstein's Army uses WWII as a grim and familiar backdrop, this Viking romp may disappoint the last few people who still think that the Norse raiders wore horned helmets into battle.

Spend any time with historians of the era, and they get very annoyed about how horribly inaccurate and just plan old anachronistic most movies set between the fall of the Roman Empire and the Norman Conquest of England are. Arguably, Tony Curtis helped set a low bar in The Vikings, but the subsequent decades haven't been much kinder.

Charlie Bewley should have a vampiric double strike against him for appearing in both The Vampire Diaries and a Twilight film. But here he comes off much more The Walking Dead's Daryl Dixon as Steinar, the fictional son of real Viking king Bagsceg (James Cosmo.) As the old man lies dying from a pierced gut, his sons bicker over who shall serve as his heir. For Bagsceg, the only option is his eldest, who was exiled onto the mists of Saxon England for crimes unspoken. And while Steinar may not be fit to be king, he is best suited to find his missing sibling.

Brother versus brother: Rogue viking Hakan (Elliot Cowan) gets all choked up with his brother Steinar (Charlie Bewley) in Hammer of the Gods

Again, there's a Saving Private Ryan, men on a mission vibe as Steinar and his cadre trek across the lightning-lit empty fields of ninth century Britain. It's an unruly, violent and amoral take on pre-industrial Europe, personified by British TV character actor Ivan Kaye as Ivar the Boneless, a debauched and unchecked former warrior who treats the lawless lands as his personal sex garden (imagine a fur-clad John Rhys-Davies on a never-ending homeopathic popper bender.) And then the Ryan symmetry vaporizes in favor of another squad-based movie that is just as familiar, but much darker in tone.

Really, it's what a lot of people thought that Nicolas Winding Refn's much more meditative Valhalla Rising would be, and what the fun but flawed Ironclad could have been. Superstition and brutality dance hand in hand around the maypole, as Steinar navigates both a strange land. Unlike Refn's mood piece, the discussions here pretty inevitably and rapidly end in crushing, smashing, rending period combat. What it lacks in subtlety it more than makes up for in steel-edged brutality.

Frankenstein's Army (Dark Sky) and Hammer of the Gods (Magnet) are out now on on DVD and Blu-Ray. DVDanger will be away next week for Fantastic Fest.