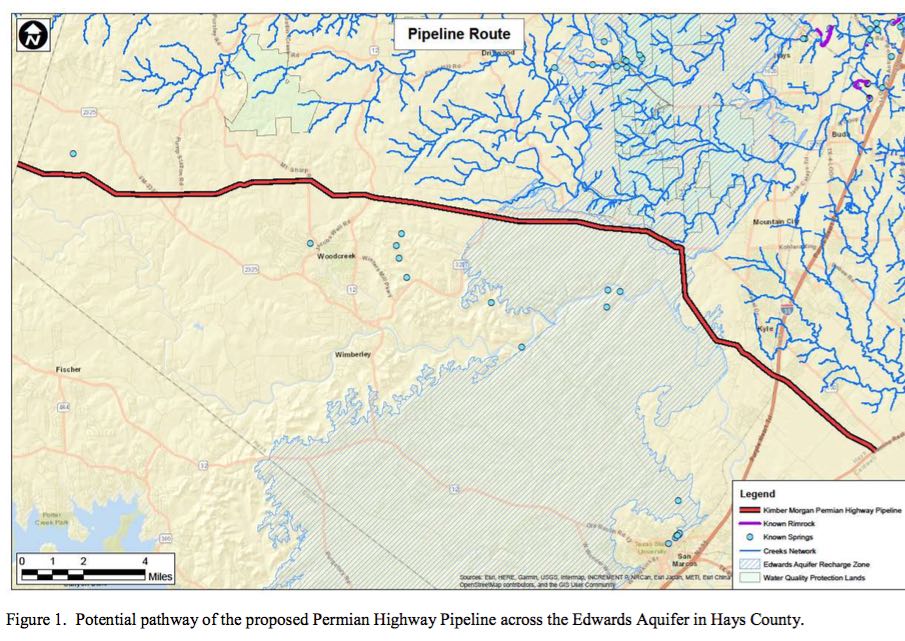 The memo is in response to a June resolution from Council opposing the pipeline and directing city staff to “study the potential water quality impacts a pipeline transporting hydrocarbons would have on the Trinity and Edwards aquifers.” The pipeline is a project of Kinder Morgan Texas Pipeline (KMTP) and EagleClaw Midstream Ventures, and would carry 2.1 billion cubic feet per day of natural gas from the Permian Basin (near Fort Stockton) to Houston for processing, passing through 16 counties – including Blanco, Caldwell, Gillespie, and Hays, on its way to existing Houston-area pipelines, then to the Texas coast, primarily for export.

Construction has already begun on the far western segment – work on the Hill Country segment is expected to begin this fall, with completion anticipated late next year. The pipeline route through Central Texas is south of Austin and Travis County, but does run through the Edwards Aquifer Recharge and Contributing Zones. Opposition from Austin follows in the wake of Hill Country jurisdictions, landowners, and organizations, a list that includes (among others) San Marcos, Kyle, Wimberley, the Barton Springs/Edwards Aquifer Conservation District, Hays Trinity Groundwater Conservation District, the Save Barton Creek Association, and Wimberley Valley Watershed Association.

Kinder Morgan insists that the pipeline can be safely constructed and operated without serious environmental risks, that it is following the (few) Texas regulations governing intrastate pipelines, and that the transported natural gas poses little risk of polluting underground aquifers. Allen Fore, the company’s vice-president for public affairs, told the Chronicle that the company respects the city’s role – although he is disappointed that the city did not reach out directly for more information before issuing the staff report. He reiterated that the pipeline will not pass through Austin, that it is safe overall, and is “compatible with the areas we’re proposing to build in.”

Herrington’s Watershed Protection Department memo on “Potential Water Quality Impacts” describes risks to the aquifer as well as to the above-ground environment – especially should the 42-inch pipeline ever be converted for crude oil, as sometimes happens – but concludes that other than research and exhortation, there is little the city can do legally to mitigate the risk or regulate the pipeline. As an intrastate pipeline, the memo reports, the PHP is not subject to federal regulation, and in Texas is under the purview of the Railroad Commission, and “specifically exempted from having to comply with the Texas Edwards Aquifer protection rules.” Limited oversight is provided by the U.S. Fish and Wildlife Service (endangered species), the Texas Commission on Environmental Quality (compression stations), and the Army Corps of Engineers (surface water crossings). 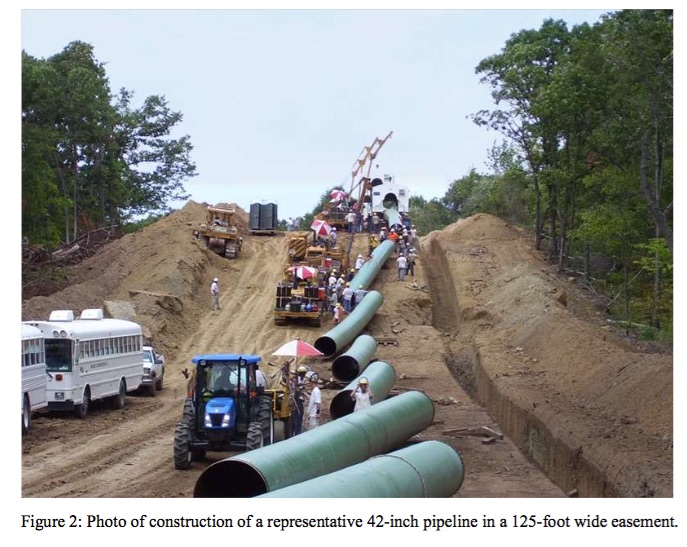 According to the staff report, pipeline excavation will risk damage or contamination to the aquifer, the construction and permanent easements will destroy golden-cheeked warbler habitat, and future operations carry the risk of pollution to Barton Springs. KTMP says it has analyzed environmental risks, the memo reports, but “it has not shared this information with the public.” Fore says that covenants with landowners will prevent any conversion to crude oil, and that pipelines have operated in the Hill Country for decades without serious environmental consequences. He also dismissed the staff’s concerns about potential catastrophic spills of liquid condensate — this is “dry gas,” he said, and if there were any accumulation of condensate, it would be only “a few gallons.” The transported gas is primarily methane, he said, and any accidental release would be vented to the air.

Whatever the risks, the city’s potential responses are limited, reports the staff memo. It can provide its own research to the various regulatory agencies and request more information from KMTP; it can coordinate and share information with other regional officials and residents; and it can support “legislative initiatives” that might in the future offer greater protections or provide stronger regulations. (A separate memo from intergovernmental relations staff suggests future legislative action – after the PHP’s scheduled completion.)

Thus far, legal efforts by Blanco and Hays County and other jurisdictions to reroute the pipeline, as well as by some landowners along the route, have been unsuccessful, as were efforts by area legislators – notably state Rep. Erin Zweiner, D-Driftwood – to enact stronger pipeline oversight. The most notable pipeline-related legislation adopted in 2019 was HB 3557, which provides that even peaceful protest “impairing or interrupting” pipeline or other infrastructure operations could result in state jail felony indictments. Fore said that the company doesn’t object to “peaceful protest” except where it interferes with safety, as on construction sites.

Recently in the Texas Tribune, Zweiner wrote that current law effectively excludes public review of the pipeline routing decisions, and current regulations are inadequate for the protection of landowners, water, and wildlife. “If Texas had basic protections in place … I wouldn’t be happy with this result, but I would accept it. … The folks of the Hill Country aren’t just advocating for their own land, they’re advocating for all of Texas.”