Under the massive old oak that shelters the Mean Eyed Cat on West Fifth St., Valinda Bolton formally initiated her run for the Democratic nomination for Travis County Commissioner, Pct. 3. Citing her time in the Legislature, Bolton said she’d bring “experience and expertise” to the Court. 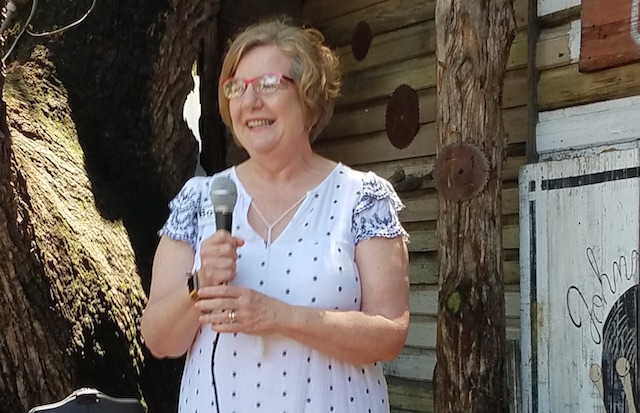 The candidate reminded the audience gathered onto the Cat’s front patio that the Pct. 3 seat was once held by Ann Richards (1977-82), in a “long line of strong Democratic women” that she intends to join. She noted her 25-year career of fighting domestic violence in nonprofit organizations and as a state rep (2007-2010), and declared, “My work has always been about building stronger and safer families and communities.”

Bolton was introduced by Robert Jones of the Environmental Defense Fund and Debby Tucker of the National Center on Domestic and Sexual Violence. Jones recalled Bolton’s 2006 campaign for HD 47, the dramatic GOP wave election in 2009 (“We lost 22 seats overnight”) and called his longtime friend a “tested warrior” for women’s rights and against climate change. He told the Democratic crowd, “Valinda shares your values.”

Tucker spoke of working with Bolton on domestic violence issues for many years, on the Travis County Council on Family Violence and on the difficult project of creating and sustaining the National Domestic Violence Hotline. She praised Bolton’s skills working with all kinds of people – even as a consultant on domestic violence to the Department of Defense – praising her ability to work with “lots of different people in many different roles.” (Bolton’s current position is with the state Comptroller’s Office, in the Dept. of Family and Protective Services.)

Bolton said that in her time at the Capitol, she worked to protect Lake Travis from pollution, and that she valued her time on the House County Affairs Committee – “where they try to backbench the minority reps. But I loved serving on County Affairs and what I learned there, and I had a 100% voting record in support of Texas counties.”

Bolton said that with the federal and state governments currently “not working,” local government is where elected officials must be “innovative, solution-focused, and work toward progress.” She described four areas that Travis County must emphasize: emergency response service, disaster preparedness, criminal justice reform (especially in sexual assault cases), and traffic.

“We must be serious and intentional about restoring hope and justice to victims [of sexual violence],” she said. She mocked incumbent Pct. 3 Commissioner Gerald Daugherty on his approach to traffic problems in southwest Travis County: “He never saw a piece of concrete he didn’t want to date … he’s all about ‘pave it, pave it, pave it.’ We need some different, long-term solutions to get us through in a rational way.”

Bolton reiterated, “County government matters and impacts all of our lives every day. We need somebody in the position that can bring progressive solutions, closely held Democratic values, experience and expertise.” Welcoming the support of the crowd – among them husband (and Judge) Andy Hathcock and son Marshall – Bolton closed, “As Travis County goes, so will go this region.”

One issue raised by Bolton and others (notably Jones in his intro) is whether Bolton’s opponents are only recent-vintage Democrats. According to Jones, Soltes hadn’t voted in Travis County until her 2018 run for the HD 47 nomination, and Howard voted four times in Republican primaries (2006-12).

Contacted later, Soltes said that's a mistake. "I've voted regularly," she said, "but the name on my driver's license is 'Sheryl.' If they looked under 'Sheri,' they probably couldn't find it."

Asked about the claim by Jones, Howard said, “I am a solid Democrat working on progressive issues,” and pointed both to her 2018 votes as a Democrat and to her various volunteer roles with the Family Resource Center, Any Baby Can, and ECHO. “I do have some Republican history,” she said, although she said she voted for Democrats when she lived in Virginia in the early Nineties, and again in 2000-2004. (In that first period, Howard worked for Joe Biden on the Senate Judiciary Committee.) “I doubt they’ll be able to find my Virginia voting records, because I haven’t been able to do it.”

Howard said she has discussed her voting history with many Travis County Democrats, “and they understand that’s a fact … I still expect strong support from people in the Democratic Party. Especially in Pct. 3,” she said, “there are thousands of voters who have voted in both primaries.”

There may be additional Democratic candidates yet to declare (the 2020 primary is next March). Incumbent Republican Daugherty has said he’s unlikely to run for another term, but he’s not certain. Asked about that possibility for next year’s general election, Bolton told the Chronicle, “I think Gerald believes a Republican can’t win this seat in 2020.”