Chencho Flores, the charismatic accordionista, singer, and emcee who performed all over Austin beginning in the Forties, died Sunday, Jan. 10, at the age of 91. Friends say he’d been in hospice after contracting COVID-19.

Born on June 2, 1929, “between the Bastrop and Travis County line” by his own account, Flores began an eight-decade career playing guitar alongside Manuel “Cowboy” Donley, who died June 28, 2020, and Domingo Villarreal in the trio Conjunto Cielito Lindo. The group put out a 78rpm record on San Antonio’s Corona label, which featured Flores-led bolero “Te Amare.” Their earliest performances consisted of shyly entering cafes and bars on Sixth Street and going from table to table playing for tips.

As a young musician, he noticed accordions made people dance. After trying unsuccessfully to learn the instrument himself, he received instruction from the godfather of Texas accordion players, Camilo Cantú. Previously, the former would sneak into bars as a teenager to watch the maestro perform.

“If I found out where he was playing, I would go there and lay back against the wall and try to look at his fingers,” Flores told Rancho Alegre Radio’s Baldomero Frank Cuellar in a 2017 interview. “I went to the restroom and he followed me and said, ‘I noticed that you’ve been looking at me and kinda tapping your feet when I’m playing, you like it?’

“I was glued to that man from then on,” said Flores.

“When I meet somebody and they praise me for my music, I always say one thing: I know what I can do and there are others who can do it better, so I know I’m not the best, but thank you anyway.” – Chencho Flores

Later, he performed in Ben Garza y Los Alegres Gavilanes, which began by playing Austin’s cantina row and went on to become staples in the dancehall circuit. He served as one of the group’s three vocalists and originally played accordion, but transitioned into an emcee/singer role as the orquesta style trended over conjunto in popularity.

“He was a very good announcer,” attested a fellow ATX accordion king on Tuesday, Sonny Trujillo, who played with the Garza outfit in the early Sixties. “He would dedicate songs, sing, and just carry the show – really get it going. People loved him, he was a great person. He could talk to anybody and make friends with a snap of his fingers.”

Married to the late Josephine Flores, to whom he was wed for 65 years, the squeezebox master told the Rancho Alegre folks that family obligations kept him from touring widely with the group. Nevertheless, locally he frequently performed alongside his brother Frank Flores. Each led conjunto groups their sibling helped populate.

Funny and magnetic, Chencho continued to amass local fans this side of the millennium with the near decade he spent in Conjunto Los Pinkys, a group anchored by bajo quinto player Bradley Jaye Williams and another legacy accordionist, Isidro Samilpa. The group’s popular Sunday residency at the White Horse brought out a multi-generational crowd rife with dancers one-third Flores’ age.

“Words cannot express how hard these types of losses hit a tightly-knit musical community like ours. We have lost one of the original Cantina Row players who helped build the legacy of Sixth Street.” – Rancho Alegre

“There’s a lot of old people there, too,” cracked Flores to the Chronicle in 2013. “They still remember me in my prime.”

“Rumors of his death began circulating a few years ago, when the word at our gig at La Tropicana was that he died of a heart attack while dancing at Dance Across Texas,” stated Williams yesterday of his former bandmate, who went on to form his own group Chencho Flores y Su Conjunto. “When I heard he was in hospice care with COVID-19, it was real. He will be missed by fans, family, and friends. Unfortunately, he is one of many legendary musicians and friends that we have lost in the past few months. Rest in peace.”

In August, Williams reported to the Chronicle, “I saw him cutting down a small magnolia tree the other day.”

White Horse owner Denis O’Donnell, who officiated the 2016 wedding of Flores and his widow Beth Placek – a ceremony attended by Congressmen Lloyd Doggett – recalls the musician as strong, indestructible.

“When he got his hips replaced, he took one week off. The next Sunday, he comes in the bar and plays a three-hour set. I asked him what the doctor said. He goes: ‘The doctor said I shouldn’t be on my feet for very long and I shouldn’t be drinking beer,’ so he tilts his warm Miller Lite back and pulls down half the bottle. He was a badass.” – White Horse owner Denis O’Donnell

“When he’d grab your hand to shake it, he had this old man boney hand with this tough guy grip,” he chuckles. “He was tough! When he got his hips replaced, he took one a week off. The next Sunday, he comes in the bar and plays a three-hour set on hips that are a week-and-a-half old!

“Words cannot express how hard these types of losses hit a tightly-knit musical community like ours. We have lost one of the original Cantina Row players who helped build the legacy of Sixth Street. Music is the most beautiful thing we have, but when it’s played by a beautiful soul like Chencho, who really played from the heart, you feel it. It makes it that much more beautiful, but at the same, it makes the loss that much more painful.

“We all have a date with destiny and we all knew this going into it, but no one’s ever ready to say goodbye.”

”I have my own style,” he said. “A lot of people like the way I play. When I meet somebody and they praise me for my music, I always say one thing: I know what I can do and there are others who can do it better, so I know I’m not the best, but thank you anyway.” 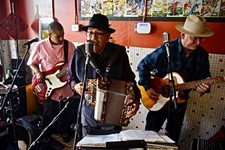 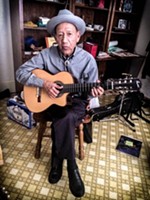