“We took romantic boleros and put in an orchestra background”

Austin’s Manuel Donley, a singer, guitarist and bandleader whose unique musical vision fused Mexican styles with American instrumentation and sophisticated orchestral arrangements, died Sunday morning at the age of 92. His career, which began in the Forties, helped define Tejano music. 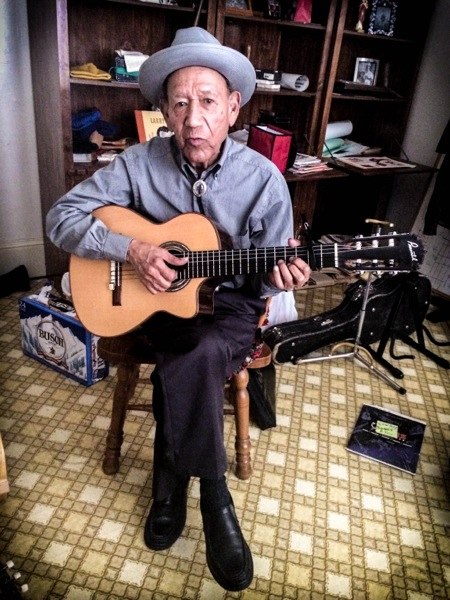 Manuel "Cowboy" Donley at his East Austin home in 2014. (Photo by Kevin Curtin)

Donley’s daughter Sylvia, who he frequently performed alongside, continued to update the public on her father’s failing health on social media. This morning, the official Manuel “Cowboy” Donley Facebook page broke the news:

“Cowboy stayed with us as long as he could. He’s now tuning his guitar and getting ready to perform all his music for that huge heavenly dance hall full of legends that have gone on before him. With a packed house – casa llena – the audience will get those big, heavy sounds of a 12-piece orquesta amplificada and some sweet, sweet guitar pickin’. Plus, the dancers will love the old style four-hour performances with polkas, waltzes, foxtrots, rumbas, mambos, cha cha cha, and the hottest rock & roll.”

The Mexican-born, Austin-raised leader of Los Heartbreakers, which started in 1949, and Las Estrellas, whose prolific recordings from the Fifties and Sixties can still be found in vinyl bins, played both electric guitar and a short-scale acoustic called a requinto. He performed, although sparingly, into his 90s. In 2014, Donley was awarded the prestigious National Endowment for the Arts National Heritage Fellowship. At that time, the local journeyman sat for an extended interview with the Chronicle, discussing his childhood in a highly segregated Austin of the Thirties, his early days of performing at 12th and Chicon and on E. Sixth Street, and his musical legacy:

AC: Tell me about the contributions to Texas music that you made with Los Heartbreakers and Las Estrellas?

MD: We took the romantic boleros from trios that were very popular in Mexico and put in an orchestra background. That was my idea. Then, we blended in instrumental polkas and rock & roll.

People had never heard or seen anything like it.

We didn’t sit down like the usual bandstand style. We stood up and people had never heard things like our loud drummer or electric bass. Everyone around here used the bull fiddle; we had three horns that were loud and blended like mad as I was playing guitar and showing off quite a bit.

AC: How were you able to write the orchestral arrangements with your limited education?

MD: All the popular Mexican ballads that were sophisticated and used harmony, nobody here could play that. Mexicans here were still playing the music from the Twenties and Thirties. I learned how to make the arrangements on a guitar.

I learned the notes thoroughly: beyond the triads, the sixth, the dominant seventh, the flatted ninth, and so on. Then I learned how to put it on paper. I taught myself all the way.

AC: When people say you’re the godfather of Tejano music, what does that imply?

MD: Well, it means I started something and I think I did, because the only big artist who did it before me was Beto Villa. But he had the soft instrumental, big band orchestra, in the Glenn Miller style, except they’d play “Polka Monterrey.” We were a band that stood up and played loud with the sophisticated arrangements and new sounds.

One of Donley’s first recordings, from an early-Fifties traditional trio romántica that included fellow Austin Tejano elder statesmen Chencho Flores, came onto our radar via Piper LeMoine of Rancho Alegre: