Life wrote his songs, he just tried to remember the words

Combining real Texas toughness and teary-eyed vulnerability, James Hand existed as authentic a country singer as they come. He passed away this morning, according to his Facebook page. “Without going into too much detail, he’s currently in the hospital and in critical condition. It started out as a heart issue, and has since led to some other complications,” the James “Slim” Hand account posted last night, asking fans for prayer. Today the sad follow-up appeared: “Our hero and friend James passed away early this morning.”

Although he’d begun singing and playing guitar in public as a young man, the spotlight escaped him until late in life. He lived with his family in a small town called Tokio, just outside of West, and would frequently come down to Austin to play. When the public began taking note of him during a small weekly gig at a Sixth Street bar called Babe’s, he was already well into his 40s.

Although he’d begun singing and playing guitar in public as a young man, the spotlight escaped him until late in life.

“When I see him up on the bandstand, he reminds me of Hank,” Broken Spoke owner James White remarked to the Chronicle in 2006. In that same feature, written by Jim Caligiuri, Hand addressed the resemblance:

“All this Hank Williams stuff, I can tell you this: there’s a lot of singers that want to be haunted. I don’t give a damn about being haunted. But for where I am, from where I’ve been to where I want to go, I just want people to know that I ain’t no Hank Williams. I’m James Hand.”

That man, who followed his heart so unwaveringly that it presented challenges for people in the music industry he worked with, owed simple allegiances – to family and God. The latter, he believed, put him on this earth to sing songs.

“It’s not all I can do,” Hand said of performing. “I’m a pretty fair horse trainer. But it’s what I’ve got to do. And I’m not talking about someone pointing a gun to my head and saying, ‘You’ve got to do this.’ I believe that God has put them inside of me. I’ve said this many times before: I don’t write no songs, life writes them.

“I just try to remember the words.”

In doing so, Hand consistently maintained an unpretentious combination of being poetic and working class.

“I do know that when I’m singing and if it’s going right, it puts goosebumps on me,” he told the Chronicle’s Christopher Gray in 2000. “When you know that you’re doing what you’re put here on earth to do, like if you're a ditchdigger and you know at the end of the day you did a good day’s work, you get goosebumps thinking, ‘All right, I did it. It’s me.’

“It’s not if anybody’s watching you or not. Like a lot of times at night, I’ll write a song or whatever, and I know it’s good [and] it’s almost like God does that.”

“When I see him up on the bandstand, he reminds me of Hank [Williams, Sr.],” Broken Spoke owner James White remarked to the Chronicle in 2006.

Hand’s recording career didn’t begin until 1999 and, the next year, he released his breakout sophomore LP Evil Things on Cold Spring Records. Six years later, he signed to roots music powerhouse Rounder Records, which issued The Truth Will Set You Free and 2009’s Shadow on the Ground. He ultimately released two more albums, Mighty Lonesome Man on the Hillgrass Bluebilly label and, his final work, Stormclouds in Heaven in 2015.

Hand had also served as an occasional actor, often playing a version of himself. In Brian Beattie’s audio-play Ivy & the Wicker Suitcase, he voice acted as a character called “Slim.” He also starred in Matt Muir’s film Thank You a Lot in 2014 as himself.

In 2000, when asked what he counted as life’s most important facets, Hand told the Chronicle:

“My family, of course. Getting to heaven is pretty important. God, and my family, and being honorable to people, and for people to know that I’m not pretentious, or that I think I’m somebody, or that I'm different. Now, the most important thing to me is my momma, but in the grand scheme of things, it’s like – what’s that poem, ‘My kingdom, my kingdom, my kingdom for a horse’?

“The very most important thing to me is to know what happiness might be, like to love somebody and have them love you back, and not be about a money thing.”

Hand had been scheduled to play at the Little Longhorn Saloon on June 21. 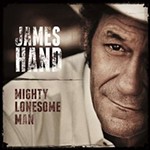